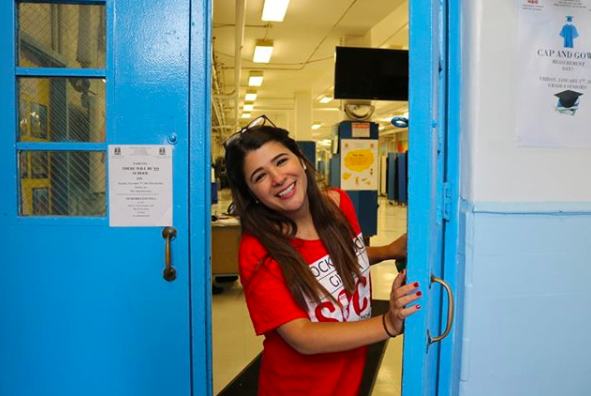 Hero of the Week: How One Woman Is Changing the Lives of People Experiencing Homelessness

Winter is fast approaching and while a lot of us are fortunate enough to turn up our thermostats during a
By MJ Kelly    October 12, 2018

Winter is fast approaching and while a lot of us are fortunate enough to turn up our thermostats during a cold snap, for people experiencing homelessness, it’s exceptionally challenging to stay warm, let alone survive. Adina Lichtman was a sophomore in college, handing out sandwiches to people in need when a man named Diego thanked her for the food.

“He said ‘Ma’am, it’s so nice that you’re giving out sandwiches but one thing we could actually really use are a pair of socks,’” remembered the 26-year-old, New Jersey native.

And even more so in the colder months. It hadn’t dawned on her until then, but she knew she wanted to make a difference in these people’s lives.

She ran up to her dorm room only to realize none of her socks would fit her new friend Diego, so she went knocking at every door on her floor and was able to collect over 40 pairs, in less than 15 minutes.

Lichtman was a sophomore at New York University when she founded Knock Knock Give A Sock (KKGS), a non-profit organization that collects socks for those experiencing homelessness.

It turns out they are the most needed, but least donated article of clothing.

Lichtman’s initiative gained momentum and by the time she was in her senior year, KKGS was operating across 20 college campuses and had collected and distributed over 50,000 pairs of socks. While she was proud of her achievements, she began questioning her mission and its impact on society.

Her initial goal was to provide socks for the homeless, but she quickly realized that more than that, she wanted to create lasting change, on a deeper level, by breaking the stigma that surrounds homelessness.

Against her university’s advice at the time, Lichtman decided to rent a room on campus to gather 50 students and 50 people living in local shelters, to have dinner side by side.

“The one rule we had was that you were only allowed to sit next to someone you’ve never spoken to,” she said. The results were eye-opening.

“College students were coming up to me saying, ‘Adina, we can’t tell who’s homeless and who’s not,” Lichtman recalled.

At the end of the night, people were exchanging phone numbers. What she was witnessing was two very detached communities, really getting to know each other. It was a sight to behold.

In that moment, Lichtman not only felt great pride, but she was also incredibly empowered and something told her, she’d discovered her life purpose.

Capitalizing on the success of her dinners at the college level, she decided it was time to bring the experience to the corporate space.

“It needs to be brought to people in power,” she thought. “It’s not going carry weight if we don’t bring it to corporate America.”

While college students have a significant amount of power, in reality, money still remains the real equivalent.

“In 2018, we have marriage equality legalized, Black Lives Matter marches are the norm in our community, racism isn’t being tolerated like it used to, but when it comes to homelessness, we seem to lack humanization of the issue.”

The biggest issue is the lack of advocacy at the policy level to actually implement change.

“We don’t have anybody in power who’s really making homelessness their main cause, and that’s because they don’t know people on a personal level that have been affected by it,” she says.

“These communities just don’t know anything about one another.”

Now that Lichtman’s completed both her undergraduate and master’s degree in social work at NYU, her mandate has become to work on bridging the gap, on a full-time basis.

JP Morgan, Bank of America and WeWork are some of the corporate partners she’s been able to organize sock drives with, but she admits there is still a lot of progress to be made.

“It’s an uphill battle, everyone is so transactional about giving, and a lot of that transaction creates a power dynamic,” she said. “I’m trying to break out of that.”

One sock and one conversation over dinner, at a time.