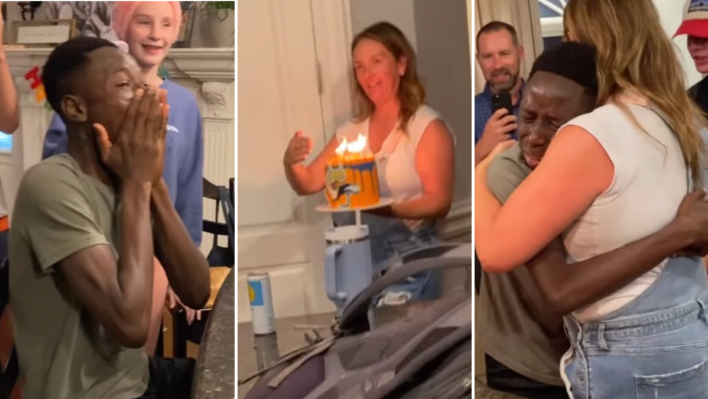 The Walker family became a family of 8 after one couple adopted two boys.
By Lindsey Staub    December 1, 2022

The Walker family became a family of 8 after one couple adopted two boys.

For two young men who didn’t have an easy start to life, a birthday cake and a new home seemed like a second heaven.

Abraham and James were born in Sierra Leone, where they were homeless.

How Two Boys Were Adopted Into a Loving Family

A local orphanage accepted the two boys and gave them shelter and food until a kind couple adopted them.

That couple was Jamie and Joe Walker, already parents to four kids.

When Abraham and James came upon their new house for the first time, they were awestruck.

“You pass through this before you go to the big heaven. That is what I believe so,” Abraham told CBS News.

RELATED: Abandoned Girl Has Most Raw Reaction When She Learns She Has Officially Been Adopted

The two boys felt a part of the family from the moment they arrived in North Carolina where they met Joe and Jamie after the adoption papers were completed.

“Every little thing that we take for granted — coming home from the airport, I hit the button to open up the front gate — ‘Dad!’” Joe Walker said.

For Abraham and James, so much of what they were experiencing when they first arrived to the Walker home was new.

“Everything is magic to them,” Joe said.

One May 20, the Walkers celebrated Abraham’s 12th birthday.

Abraham and James had never celebrated their birthdays before; they weren’t even sure when they were born. The cake Jamie brought out that night was the first one Abraham ever had.

“When I see the cake, I thought that is the most beautifulest thing I’ve ever seen,” Abraham said. “It’s not just a birthday cake. It’s a blessing cake.”

Joe, Jamie, and all of the Walker children accepted the two boys into their family immediately. None of their differences were an obstacle to their love, and now the Walkers have more people to love and Abraham and James have a place to call home.