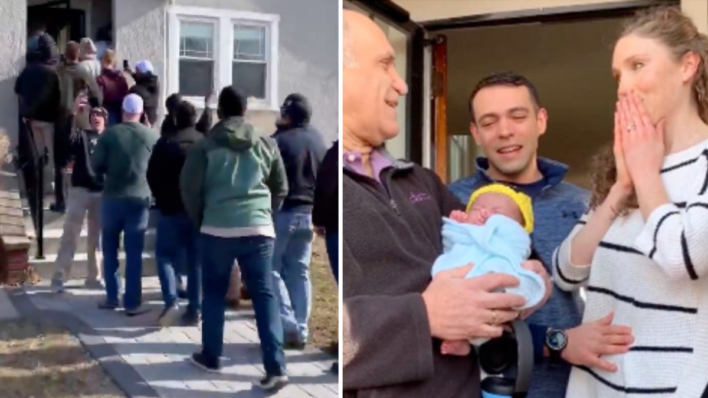 One couple was expecting another home inspection from an adoption agency, but were surprised with their newborn baby instead.
By Sophie Tolias    September 13, 2022

One couple was expecting another home inspection from an adoption agency, but were surprised with their newborn baby instead.

Michael Faherty, a firefighter working for the Anne Arundel Fire Department, and Karen Faherty, a nurse at the University of Maryland Medical Center, tied the knot in 2015.

Their love story started when they met in the Reserve Officer Training Corps while they were students at the University of Scranton. After graduating, they served in the Army and then settled down to start their family.

Why One Man Heard Sirens Outside His Home

After four years of infertility and stress, the couple decided to adopt. They chose Adoption Makes Family to handle the process. It took a year before they heard from the agency.

One Saturday, Michael heard sirens and people talking in front of their home. “And then I hear them start to sing and then I start to hone in on some of the faces and I look and think, ‘Wait, I know these people,’” Mike told ABC 7.

Karen and Michael were expecting someone from the adoption agency who had phoned about a last-minute home inspection. They were confused about why the agency needed a second visit, but they agreed.

We had convinced ourselves almost a little too well which is partially why we were so shocked when we opened the door and saw the fire truck and the ambulance and 30 firefighters.

The group started singing the song “Little Red Wagon,” a song the couple learned at the fire academy.

Dean Kirschner, the agency founder, loves surprising his clients. “They might think they know they’re getting a baby but they never know how,” Kirschner told ABC 7.

He calls the special day parents welcome their child “Gotcha Day.” And he planned the perfect Gotcha Day for Karen and Mike.

When Kirschner found out Michael’s occupation, he called the fire department and set up everything.

How a Newborn Baby Was Adopted Into a Loving Family

As the couple looked out, they saw Kirschner walking towards them with a newborn in his arms. “It’s the best feeling in the world. It was such a gift that the birth parents gave to us that we dreamt about this time for so long and without them, this dream would never come true,” Karen Faherty told ABC 7.

Karen kissed her child and then Kirschner guided the couple to see their other surprise waiting inside the ambulance: boxes of diapers and other necessities for first-time parents.

According to the agency, the biological mother chose Michael and Karen just weeks before she gave birth. She also saw the video and knew she made the right decision, knowing her son would be loved and would have a good life.