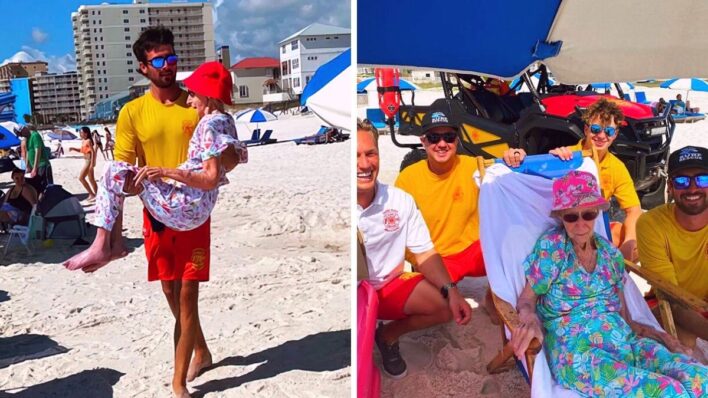 A group of kind lifeguards are being regarded as “heroes” after they decided to step in and give a nonagenarian woman a memorable vacation.
By Aly Walansky    November 15, 2021

A group of kind lifeguards are being regarded as “heroes” after they decided to step in and give a nonagenarian woman a memorable vacation.

Recently, kind-hearted lifeguards at an Alabama beach made sure a 95-year-old woman wouldn’t have those regrets, and personally carried her to the beach each day for a whole week, making sure she enjoyed her vacation.

The lifeguards will never forget the difference they were able to make for Dottie Schneider, who is originally from Chandler, Indiana, but was vacationing with her daughter Kimberly Waterbury on the Gulf Coast this October.

Schneider just wanted to relax on the beach, but there was no way to get her wheelchair on the sand, and walking wasn’t an option for her.  That’s when the lifeguards stepped in to help, reported Fox News.

When one of the lifeguards saw Schneider and her daughter trying to figure out how to get on the beach, he offered her a ride in his beach patrol vehicle, which she accepted happily. Next, lifeguard Shane Martin took the helm and helped Schneider all week long.

According to a post made on Facebook by Orange Beach Surf Rescue, sometimes Schneider took the vehicle herself, and other times the guards carried her to the beach.

“In the past, when they’d gone to the beach, she couldn’t get to the beachfront. They had to sit by the pool deck. Being able to put her feet in the sand and seeing the waves crash on the shore, I think that made all the difference,” said Brett Lesinger, Beach Safety Division Chief in the City of Orange Beach.

We are forever indebted to the guys with Orange Beach Surf Rescue. They made my mother feel special. She was not made to feel like she was a burden on anybody.

Treat everyone with respect

When the vacation was over, new friendships had been born and the guards even gathered to say goodbyes to Schneider and her family.

It’s safe to say that Schneider had a “magical” time on her vacation. “I had fun!” she said. She now eagerly waits to visit Alabama and see her new friends’ friendly faces once again.

In today’s world, it is easy for an elderly person to feel like they are a burden to their family and the people around them. It’s very important to let senior citizens know that they are respected and integral to our society.

Schneider and her daughter will never forget how selfless complete strangers can be. The lifeguards had nothing to gain from this situation, even refusing a handsome tip from Schneider’s daughter. It goes to show that a little bit of kindness, tenderness, and attention is remembered for a long time.