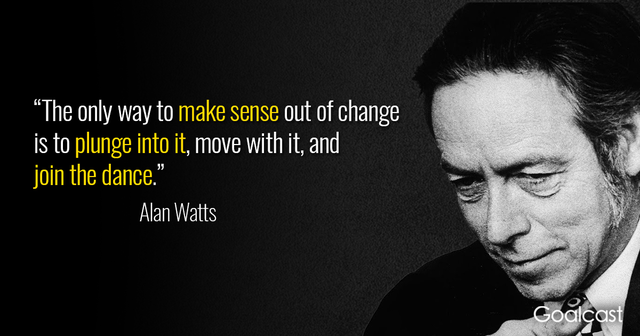 A prolific author and speaker, Alan Wilson Watts is credited with the interpretation and introduction of Eastern philosophy to the Western audience. As
By Flavia Medrut    January 17, 2018

A prolific author and speaker, Alan Wilson Watts is credited with the interpretation and introduction of Eastern philosophy to the Western audience.

As his mother’s students were children of missionaries to Asia, Watts began to be fascinated by Asian art, literature, and philosophy; so in time, he learned Chinese and started to explore the fundamental beliefs and practices of religions and philosophies of India and East Asia.

After a rigorous research in Zen Buddhism, Watts published one of the first books on the topic – The Way of Zen – introducing the burgeoning youth culture to it. Due to all the wisdom it embodies, Watts even suggested that Buddhism could be presented and taught as a form of psychotherapy, and not only as a religion.

Alan Watts is the author of more than 25 books on various topics such as philosophy, Eastern and Western religion, natural history, semantics, cybernetics and the anthropology of sexuality.

Watts was a man who tried and explored all that he could on mystical insight.

Here are 25 Alan Watts quotes to help you become more aware of yourself and your surroundings:

Trying to define yourself is like trying to bite your own teeth.

We seldom realize, for example that our most private thoughts and emotions are not actually our own. For we think in terms of languages and images which we did not invent, but which were given to us by our society.

Man suffers only because he takes seriously what the Gods made for fun.

This is the real secret of life — to be completely engaged with what you are doing in the here and now. And instead of calling it work, realize it is play.

Muddy water is best cleared by leaving it alone.

You are an aperture through which the universe is looking at and exploring itself.

Every intelligent individual wants to know what makes him tick, and yet is at once fascinated and frustrated by the fact that oneself is the most difficult of all things to know.

No one is more dangerously insane than one who is sane all the time: he is like a steel bridge without flexibility, and the order of his life is rigid and brittle.

Problems that remain persistently insoluble should always be suspected as questions asked in the wrong way.

One is a great deal less anxious if one feels perfectly free to be anxious, and the same may be said of guilt.

The world is filled with love-play, from animal lust to sublime compassion.

What we have to discover is that there is no safety, that seeking is painful, and that when we imagine that we have found it, we don’t like it.

Words can be communicative only between those who share similar experiences.

If you cannot trust yourself, you cannot even trust your mistrust of yourself – so that without this underlying trust in the whole system of nature you are simply paralyzed.

The only way to make sense out of change is to plunge into it, move with it, and join the dance.

Technology is destructive only in the hands of people who do not realize that they are one and the same process as the universe.

Hospitals should be arranged in such a way as to make being sick an interesting experience. One learns a great deal sometimes from being sick.

Normally, we do not so much look at things as overlook them.

Our pleasures are not material pleasures, but symbols of pleasure – attractively packaged but inferior in content.

It is hard indeed to notice anything for which the languages available to us have no description.

It’s better to have a short life that is full of what you like doing, than a long life spent in a miserable way.

Society is our extended mind and body.