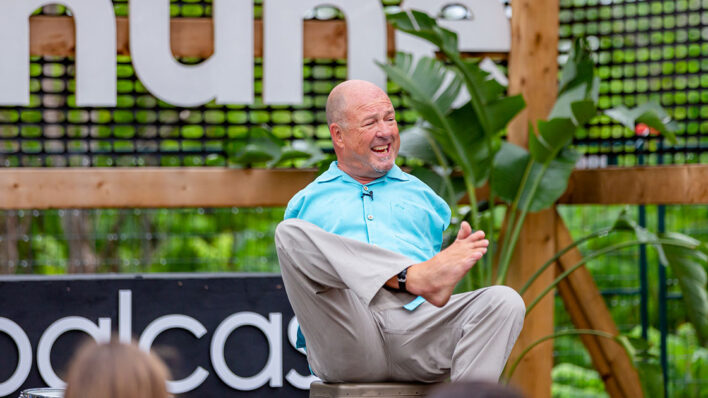 Alvin Law, who was born with no arms, credits his adoptive mother with giving him the determination to break past labels and become a rock star.
By Aly Walansky    October 8, 2019

Alvin Law, who was born with no arms, credits his adoptive mother with giving him the determination to break past labels and become a rock star.

In the 1960s, there were thousands of babies born deformed because their moms had used a morning sickness drug, Thalidomide. The moms had no idea that this drugs had dangerous side effects but by the time they discovered it, 13,000 babies had been born with deformities.

Alvin Law was one of those babies, born without arms. His birth parents were told to give him up to the system– they weren’t equipped to care for him.

It seems like a tragedy, but it was only the beginning of Alvin’s amazing story.

The family that chose him

Alvin’s birth family gave him up for adoption thinking they could not care for his “special needs.” He was adopted by Hilda Law, a fifty-five year old foster mother, who, along with her husband, Jack, took in neglected and abused children.

“My mom taught me to sew buttons on rags with my toes, including threading the needles, tying the knots when I was three years old. Who does that?” he said in a later interview.

His father taught him to skate, too, and gave him a lesson when he fell. “Instead of dad scooping me in his arms and taking me for an ice cream, it was like, ‘Get off your butt. You’re making a mess!'”

Ultimately, his family helped him learn to use his feet for hands. And those feet have become rather famous over the years!

Alvin even went on to star in the music video We are the Superhumans, which featured musicians and athletes from around the world, some of whom are in wheelchairs, some who wear prosthetics and some who don’t, all making great music together. Alvin played the drums with his feet.

“They are not embarrassed about their stumps,” Law told CBC’s The Homestretch later. “We’re very proud of what we can do.”

Thanks to his mother’s unstoppable determination, Alvin was able to attend public school, where he nurtured his musical ability and joined the band. It wasn’t easy, growing up with such an obvious difference from his classmates.

Though Alvin’s guidance counsellor underestimated him and tried to discourage from following his biggest dreams, Alvin’s dream was deterred but never killed.

His passion led him to become an award-winning musician and graduate from high school with honors. He went on to university, from which he graduated with honors, and then embarked on a career in radio broadcasting.

Today, the most common thing he hears when he’s out interacting with people is, “Wow, that’s cool man,” he said.

Early on, Law worked DJing in FM Radio, but in the mid-80s he took a break to start conducting awareness seminars in hundreds of schools across the province of Alberta, Canada. This is how he started to work in motivational speaking.

He also did a bunch of work in civil service and was often seen donating his time at telethons like Telemiracle. Over the years he raised hundreds of millions for charities, mostly those that support disabled kids.

In 1988, Alvin created AJL Communications Ltd, and dedicated his life to becoming a full-time professional speaker. He also founded the Thalidomide Victims Association in the late 1980s, but never forgets

“‘If you are trying to get sympathy from Canadians for the plight of Thalidomide survivors, why are you using my story? I don’t exactly have a sad story,’” says Law, in an interview.

They called us the victims, but that’s not how I see it in my own personal life.

Alvin’s message is one about perseverance and bringing good out of what could have been tragedy, and that the kindness and bravery of one person — like his mother Hilda — can give another the strength to break past the limits set by other.