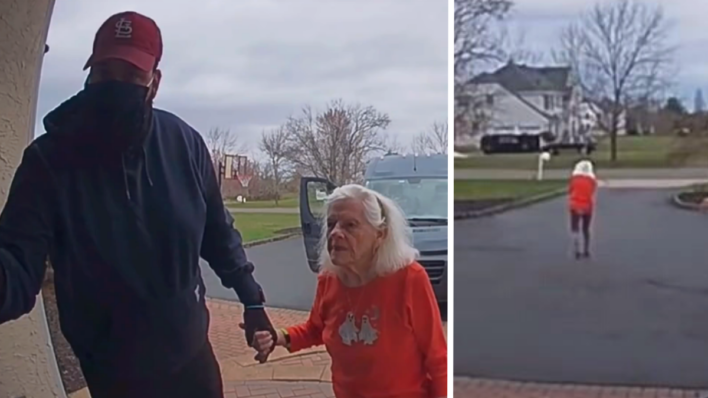 A grandmother with Alzheimer’s was found wandering in the street by a caring Amazon driver- who ended up delivering the sweetest gift.
By Sophie Babinski    December 10, 2021

A grandmother with Alzheimer’s was found wandering in the street by a caring Amazon driver- who ended up delivering the sweetest gift.

Community is an amazing thing to have and something that can change the course of a life. They say it takes a village to raise a child, but it also takes a community to keep everyone safe and happy. For one family in New Jersey, a commitment to the community helped avoid a serious tragedy.

Wilmar, an Amazon driver from New Jersey, is committed to looking out for his neighbours and helping whenever he can. Luckily, his values came in handy when he came across a frazzled elderly woman, waving her hands. At first, Wilmar thought maybe the woman was waving at him to be friendly, something that isn’t uncommon in the area. Upon further reflection, he realized that the woman was in distress, and waving at him to help her. He quickly made his way over to her and saw that she had a medical alert bracelet, that included her home address and contact information, on her arm. Wilmar called the contact number and got in touch with the woman’s granddaughter, Karen.

I was delivering and I saw this older lady was walking by. She waved at me, which isn’t an odd occurrence, people wave at you all the time as an Amazon driver. But she was waving at me like something happened.

While Karen was not at home to get her grandmother to safety, she was able to communicate with Wilmar via her home’s Ring camera. Once her grandmother, 92-year-old Gigi was safe, Karen explained to Wilmar that she had Alzheimer’s disease. It turns out that Karen cares for both her grandmother and her father, who is suffering from dementia. Working and being a caretaker is extremely taxing, and Karen felt very lucky to have someone like Wilmar looking out for the neighborhood.

I felt that Wilmar went above and beyond. We have that type of a great close-knit community here, that if there’s something that a driver’s going to spot, that’s out of line, he’s going to say, ‘I’m going to make sure that my customers are taken care of, because this doesn’t look right.’

The power of community

Building a close-knit community is one of the most important things a person can do. A community can help make hard times less painful, and make good times even better. Wilmar knew the power of his community and was able to use it to help avoid a terrible situation.

Look out for other people
“The greatness of a community is most accurately measured by compassionate actions of its members.” – Coretta Scott King
Tags
Share
← Prev Post Next Post →