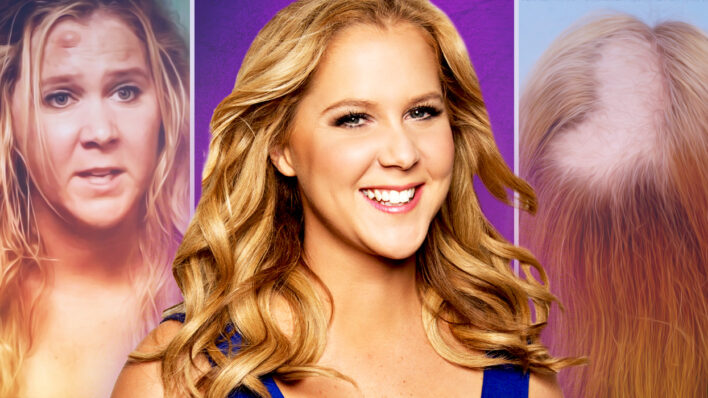 Actor, comedian and writer Amy Schumer recently revealed a disorder she’s been living with since childhood — here’s why her reveal is crucial, especially now.
By Barbara Pavone    May 1, 2022

Actor, comedian and writer Amy Schumer recently revealed a disorder she’s been living with since childhood — here’s why her reveal is crucial, especially now.

Comedian Amy Schumer is known for many things, but perhaps paramount among them is her (sometimes brutal) honesty.

Whether she’s cracking jokes, speaking candidly about her looks (she recently admitted to getting liposuction because she “just wanted to be real about it”), or sharing her childhood secrets (her 2016 memoir, The Girl With the Lower Back Tattoo, was unapologetically unfiltered), Schumer has never held back on the truth.

However, she recently revealed that there has been one thing she’s always feared opening up about — until now.

Why Amy Schumer‘s Trichotillomania Reveal Is So Important

In March 2022, fans of Amy Schumer’s Hulu dramedy, Life & Beth, learned something incredibly personal about the star. She has secretly battled trichotillomania for much of her life.

Viewers got a glimpse into her early struggle with the hair-pulling disorder as a young Schumer was portrayed being fitted for a wig. It’s a “big secret” she was reluctant to share because, as she told The Hollywood Reporter, “it’s been what I’ve carried so much shame about for so long.”

Schumer first experienced trichotillomania around the age of 13, during what was a particularly high-stress period in her childhood.

Her home life appeared to be crumbling as her father, who struggled with alcoholism, was diagnosed with multiple sclerosis and, at the same time, her mother announced she wanted a divorce. What’s more, Schumer’s mom revealed she’d fallen in love with a married man and that man was Schumer’s best friend’s father.

RELATED: How to Talk to Your Kids About Mental Health

As Mayo Clinic explains, trichotillomania is closely linked to stress and the young comedian soon started pulling her hair out as a coping mechanism. The condition got so bad that she actually needed to wear a wig to cover bald spots.

Admitting to The Hollywood Reporter that “everybody” at school knew she had a wig, she hid the condition nonetheless and kept it under wraps for decades… until she no longer wanted to.

Explaining why she felt it was now time to address her trichotillomania, the Oscars co-host said it was all about freeing herself and helping others do the same. “I thought putting it in there would be good for me to alleviate some of my shame and maybe, hopefully, help others alleviate some of theirs, too,” she noted.

Not much is known about trichotillomania and it’s often misdiagnosed as OCD (or not diagnosed at all), but the hair-pulling disorder is more common than you may think. In fact, a number of celebrities are believed to have trichotillomania, including Megan Fox, Charlize Theron, and Justin Timberlake.

While a lot more research needs to be done into its causes and potential treatments, Mayo Clinic explains that there are a few establishing factors to help diagnose the condition. For one, it’s not simply a bad habit, rather, it’s a mental disorder that manifests itself in a conscious or subconscious desire to pull one’s hair.

Oftentimes, those who suffer from trichotillomania will experience “recurrent, irresistible urges to pull out hair” from their scalp, eyebrows, etc. in an effort to relieve tension when they feel stress or anxiety.

RELATED: What is Social Anxiety Disorder? Signs and Solutions

Most commonly, trichotillomania first appears between the ages of 10 and 13 — and it never goes away. While therapy can help, stopping the urge can be difficult, even when a person tries their best to break the behavior. As Charles Mansueto, a clinical psychologist who focuses on trichotillomania, told BuzzFeed News, that’s actually one of the hardest things about having trichotillomania.

Because so many outsiders believe it’s a “self-inflicted disorder” that can easily be stopped anytime, it comes with “a level of shame that’s very different.” And because some doctors believe it may be genetic, it’s caused her a whole other type of anxiety. It’s this harsh reality that Schumer stressed during her interview with The Hollywood Reporter:

“It’s not that I used to have this problem and now I don’t. It’s still something that I struggle with. Every time [my son] touches his head, I’m having a heart attack.”

Amy Schumer wanted to help others with her brave confession and she certainly has. The TLC Foundation for Body-Focused Repetitive Behaviors was one of the first to praise the comedian for being open and honest about trichotillomania, noting how, “when a person of Amy Schumer’s stature has the courage to speak their truth, it helps start to destigmatize and normalize conversations.”

Speaking with BuzzFeed News, the foundation’s interim executive director, Jen Monteleone, also explained how that, in turn, helps “build awareness, acceptance, and inclusion, and helps others know that they can live full and productive lives.”

Indeed, by sharing her truth, Schumer was able to send a powerful message into the world. It’s OK to be different and it’s OK to have trichotillomania, and you’re certainly not alone. As 21-year-old Rhiannon Sowell told the outlet, she was thankful for the actor’s confession because “knowing that a celebrity who is loved and looked up to has it as well just makes me feel less alone.”

That’s the real power of truth: liberation. It can be difficult to overcome the negative feelings that are so often tied to being “different” and yet, we’re all different. Most of us have (or will) face struggles throughout our lifetimes and there is no shame in that.

Yes, fear of being judged is a powerful thing (especially in a world where the media continues to push “perfection”) and, as a result, hiding your truth can feel easier and safer. However, that comes with its own price. The more you try to hide something, the greater its power over you will become.

As Amy Schumer’s candid confession shows us, whether you’re an A-lister or not, being open and honest can set you free and that’s a truly empowering thing — not just for yourself but also for those around you.

Amy Schumer and Chris Fischer’s Marriage Blossomed From Their Idiosyncrasies