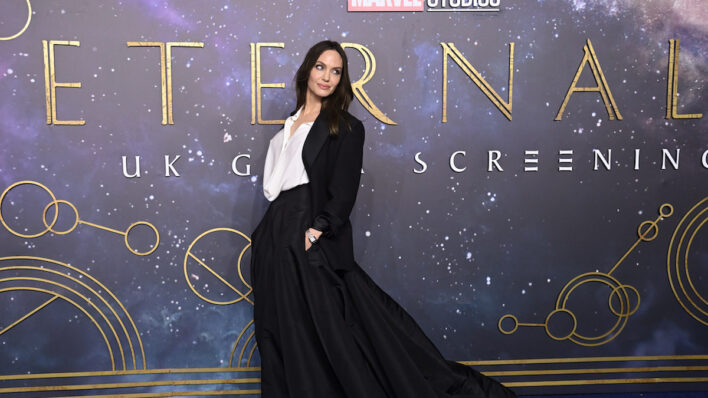 With three marriages and six children under her belt, how is Angelina Jolie navigating this confusing dating landscape?
By Shaoni Das    November 3, 2021

With three marriages and six children under her belt, how is Angelina Jolie navigating this confusing dating landscape?

How does one of the most gorgeous, alluring, and desired women on the planet manage to stay single?

Since her divorce from Brad Pitt nearly five years ago, Angelina Jolie has been lying low and keeping to herself. She’s been spotted on many a mysterious dinner with men —sometimes even with her exes— but by and large, the public isn’t aware of any serious romances in her life.  Of course, you can’t forget the woman is raising six children by herself, is embroiled in a lengthy and contentious custody battle with her ex-husband, and focuses much of her energy on her humanitarian endeavors. Understandably, it’s more than challenging to carve out time for yourself, much less a potential partner.

However, it’s not just a busy schedule that’s keeping Angie from dipping back into the pool. For a celebrity whose love life has and continues to be a matter of national importance, she’s not giving in to public pressure and is sticking to her guns. Here is the reason why Angelina Jolie continues to wait patiently for the right person:

When you’ve been through three marriages, one of which produced six children and its own enduring fandom, you might want to be a little careful about how you approach the modern dating landscape. The last time Angelina Jolie fell in love, it was with a married man; the love affair had been so potent and impulsive it catalyzed a dramatic series of events from which the masses are still reeling. The three parties involved in the situation have their own version of the truth, but when your personal life becomes a subject of international obsession, mockery, and debate, can you really be blamed if you want to take your time?

Not to mention, if Angelina and Brad’s connection is what triggered the end of the latter’s marriage with Jennifer Aniston, is there a sense of guilt on Angelina’s part? Furthermore, as if the circumstances couldn’t get more complex, Angelina is currently waging a bitter and controversial battle against Brad over their children’s custody, a litigation process that includes severe domestic abuse and alcoholism claims. In fact, Angelina’s dating history has been so chaotic and widely publicized her apprehension over jumping into something new is warranted.

When asked by E! News Daily Pop whether she has a list of “no-nos,” regarding her future significant other and their attributes, the Eternals star said she absolutely does. In her view, the list’s only so elaborate and “long” because she’s been “alone for a long time now,” so any possible relationship has to be well worth her time.

I probably have a very long list. I’ve been alone for a long time now.

There’s nothing wrong with being selective when it comes to your future. Decision-making is key, and the stakes couldn’t be higher. One bad call can totally shatter your emotional and psychological state of being, and it can take years and years to recover. Too often, women are told to settle for just about anyone and that being fastidious about their personal choices only makes them grouchy and unappealing. Being single is thought of as the worst possible scenario, so naturally, they’re told to lower their standards just for the sake of partnering with someone and maintaining their reputation. What about finding lifelong companionship, connection, and passion — shouldn’t this take precedence over perception or how society views you?

If you’re planning to be with someone for the long haul and shower them with your love and adoration, you better hope you feel 100% sure. Anything less than that, and you’re probably in the wrong lane.

Her first priority will always be her kids, “everything else comes second”

Angelina has remained tight-lipped when pressed about her private sphere. Most recently, she’s been linked with The Weekend and has also been photographed grabbing dinner with her first husband, Jonny Lee Miller. With how her last marriage exploded in the mainstream media, it’s only fair she’s afforded adequate space and time to figure out her romantic adventures.

It’s also worth noting how most of her time is spent taking care of her children and nurturing their hobbies. Her youngest children, twins Knox and Vivienne, have turned thirteen and are rocketing through their adolescence; as such, their 46-year-old mother is grappling with the changing dynamics in the family. Before, she’d been the one to wake up and worry restlessly about the wellbeing of her young ones, and but as they get older, the children are the ones ensuring their mother is doing okay. The tables are turning, and Angie is confronting these changes head-on.

At the end of the day, the Jolie-Pitt brood and Angelina are a “team” working together to keep the family functioning and safe. When you have so many teenagers to tend to on a daily basis, you might not think about dating at all. Perhaps that’s exactly what’s kept the Salt actress mysterious single for such a long time, and why she’s painstakingly precise about finding the right person. “As a mother, you also have a responsibility first and foremost towards the kids,” she told PEOPLE. Everything else comes second, she added. The ideal man doesn’t just have to make her happy; they have to mesh well with the entire family structure. That’s a tall order to fill, and Angie shouldn’t have to settle for anything less.

We all have our difficult times, but as a mother, you also have a responsibility first and foremost toward the kids. They are going through their formative years and everything else comes second to that.

As it appears, love is on the horizon for Angelina. Though she hasn’t confirmed any rumors herself, insider sources say she’s “having so much fun right now, and she’s making up for lost time.” Whether or not she is able to find love doesn’t matter; what matters is that she’s doing it on her own terms and doesn’t need to bow down to society’s expectations at any point.

Your standards tell you what you deserve

You only get one life to live, so why not pick and choose the type of experiences you want and the kind of people you want to share them with?

Your standards are a measure that tells you what you deserve from other people. You’re cognizant of your self-worth and the power you possess, so why adjust your expectations unless they’re genuinely getting in your way? Marriage and long-term commitment are draining undertakings; they require the utmost dedication, patience, and focus. You shouldn’t have to go through any of these challenges unless you’re fully prepared for the toll they take on you. Moreover, the companion you choose will make or break the whole journey. So keep those standards healthy, and have faith someone will meet them eventually.