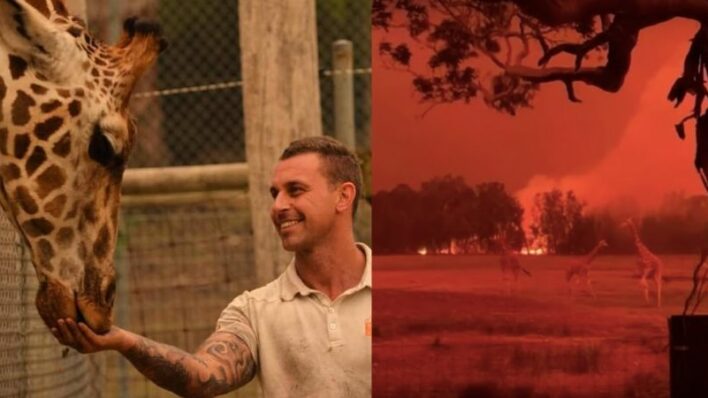 Australia has been ravaged by bushfires, killing half a billion animals but the Mogo Wildlife Park zookeeper did everything to protect his.
By Aly Walansky    January 7, 2020

Australia has been ravaged by bushfires, killing half a billion animals but the Mogo Wildlife Park zookeeper did everything to protect his.

Right now, horrific fires are ravaging Australia, having claimed 24 human lives so far, but also killed 500 million precious animals. That’s an incalculable and disastrous loss to the ecosystem, but brave souls are rising from the ashes to do anything and everything they can to help, and inject hope to what feels like a rather hopeless situation.

The Mogo Wildlife Park rose to the challenge

The Mogo Wildlife Park on the South Coast of New South Wales, Australia, which is 10 minutes from Bateman’s Bay (an area severely damaged by the bushfires), is home to nearly 200 endangered and exotic animals. Its fauna hosts Sumatran tigers and southern white rhinos, and also boasts the largest collection of primates in Australia.

The animals seemed to be in a state of peril as thousands of people in the surrounding area started to evacuate, but the zookeepers came up with a rather surprising, but genius plan to save every single animal in the zoo.

He could not leave them behind

Chad Staples, director of the zoo, told the Australian Broadcasting Company that the whole team was prepared, as they had a fire defense plan. Since everyone in the zoo loved the animals “like their family,” they all mobilized to put the plan in motion.

Any species of animal that was small enough, or was in an area we couldn’t protect, we caught up. Right now in my house there’s animals of all descriptions in all the different rooms with different pet packs so that they’re safe and protected.

That’s right, animals ranging from monkeys to red pandas, and even a tiger, were moved into Staples’ home to protect them from the fires. Their efforts were successful, as Chad recounted: “Due to the amazing staff here and a well-executed plan, no one is hurt, not a single animal.”

They made it work despite the danger

Staples also mentioned that zookeepers felt it was safer to keep larger and more dangerous animals like lions and gorillas in their night enclosures. This is where they felt more comfortable.

“We’ve been sitting in a plume of smoke for weeks now, so it wasn’t like today set that off worse. But yes, there were times that it got a bit tense,” he told the ABC.

The zoo confirmed that every animal was “safe and in wonderful care.”

The employees of the Mogo Wildlife Park have shown exceptional courage, determination and solidarity by joining together to save the animals from what could have been a terrible fate.

While tragedies can cause lasting damage to people and the environment, they also bring people together and prove that we can overcome almost anything when we stick together.

What can you do to help?