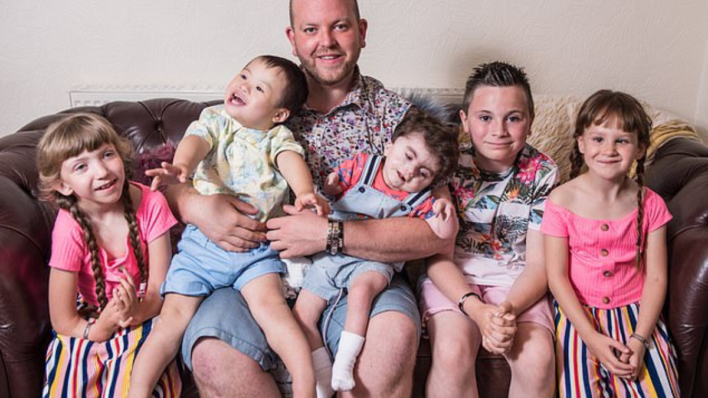 A single, gay man won’t take credit for his kind and caring work raising five children who each have specific
By Joel Balsam    February 26, 2021

A single, gay man won’t take credit for his kind and caring work raising five children who each have specific needs.

Adoption was difficult at first

At first, it was a long and difficult process for Ben Carpenter to adopt a child. He’s single, gay, and when he adopted his first kid he was just 21.

“When I started it was much longer and I had to prove myself,” he told This Morning, according to The Daily Mail.

Now at age 36, Carpenter says adopting is “fun and swift” after taking in five kids and he won’t rule out fostering or adopting more.

Each child has specific needs

Carpenter, from Huddersfield in England, used to work in special needs care and decided to take his work home with him by adopting five children between the ages of two and 13 — Louis, Jack, Ruby, Lily, and Joseph.

Each child has their own specific, complex needs.

Jack, the eldest, has autism and obsessive compulsive disorder (OCD). Ruby has Pierre Robin syndrome, which affects movement in her face and arms. Lily is Ruby’s biological half-sister and she’s deaf (Ben knows sign language). Joseph has Down Syndrome and needs a colostomy. Finally, Louis is blind and has cerebral palsy.

Ben also adopted a sixth child, Noah, but he died at the age of two after a stomach infection led to complications.

“They are the most wonderful children, you know people say ‘the children are lucky to have you,’ but I’m so lucky to have them. They enrich my life in every way.”

When asked on This Morning if he views himself as some sort of hero, he said no.

“I’m just me I’m not a superdad, I’m not this saint, I’m not this hero. I’m me, I’m Ben and anyone who knows me knows—” and then Ben was cutely interrupted by one of his kids who said “you’re dad.”

All caring parents are heroes

Ben might not be a superdad, but he sounds like a very kind person to take on the burden of caring not for just one special needs child, but five. Still, parenting isn’t a competition. Whether it’s one child or 10, any caring parent can be heroic if they care for and love their children.