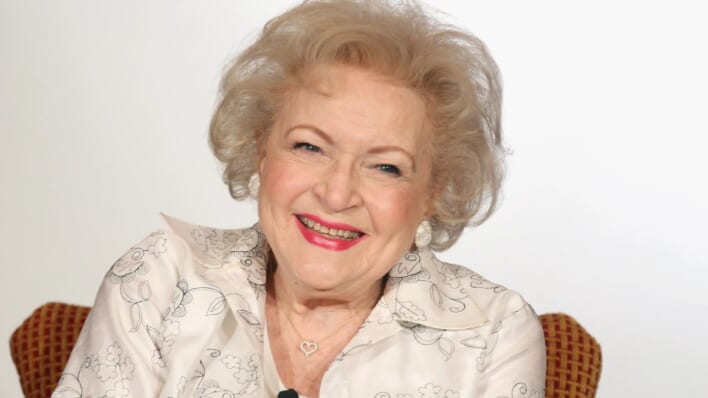 The comedian was a legend through and through: when faced with the overwhelming pressure to give in to hate, she resisted and won.
By Shaoni Das    January 17, 2022

The comedian was a legend through and through: when faced with the overwhelming pressure to give in to hate, she resisted and won.

The world is still mourning the immense loss of Betty White.

The comedian passed away on December 31, 2021, just weeks away from what would have been her 100th birthday. The almost-centenarian was an icon in every sense of the word: with a career spanning eighty years, she marked a turning point for women in entertainment. Not only had she been one of the first women to helm her own show on television, but she also laid the groundwork for how women could assert their agency in a landscape that was still dismissive of their talent and power.

Betty imbued charm, wit, and sincerity at each and every turn, always ready to poke fun at herself and those around her, eager to uncover both the humanity in comedy and the comedy in humanity. Today, many of us don’t even comprehend the power she wielded, the significance she carried as the foremost ‘Golden Girl’ of our zeitgeist, or how she unshakably fought to bring justice and diversity to our screens.

Let’s take a moment to honor the ‘First Lady of Television’ and what her progressiveness meant to those watching at home.

When asked to remove a Black dancer from her show, Betty said, “Live with it.”

What really defines Betty White’s legacy is her sheer willingness to go against the grain and subvert expectations.

When so many of her peers were justifying their ignorance by claiming to be a product of their times, Betty stood out. She knew exactly what was right and what was wrong, and didn’t let the status quo defer her from taking a stand. She was fond of leveraging her power to extend empathy towards those who were far less privileged than her. Sometimes this involved putting her own reputation on the line, and still, she didn’t back down. Case in point: when she rallied to have a Black tap dancer perform on her show despite the audience pushing for his expulsion.

This took place in 1954: when American society was still organized on the basis of hard racial lines, and segregation was considered the norm. Arthur Duncan, the dancer in question, was a young man in his twenties, striving to make a mark in the industry. Betty White gave Arthur his first job on her televised variety show, The Betty White Show. She didn’t have an idea of the extent to which it would enrage her market, yet the collective furor didn’t crush her spirit or change her mind. She treated Arthur like a friend and fought tooth and nail to have him on her show. When asked why she was risking her livelihood to defend a Black man, she said, “I’m sorry, but he stays…Live with it,” as per People.

In a 2018 documentary honoring Betty’s illustrious career, Arthur said, “I credit Betty White for really getting me started in show business, in television.” Betty herself wasn’t blind to the outrage, but she wouldn’t let the commotion, or as she said, “the ruckus” sway her in the least. At one point, the network threatened to take her off the air for having a Black man repeatedly appear on the show, but she wouldn’t budge. “There was never a question at all,” said Arthur regarding Betty’s insistence.

In fact, as per Arthur, Betty gave him more time on the air when they started receiving backlash. When letters started coming from “Mississippi and elsewhere” demanding Arthur’s removal, Betty simply wrote back saying, “Needless to say, we used Arthur Duncan every opportunity we could.” It wasn’t a matter of finding a compromise or trying to understand the other side’s perspective; she wanted to trust her gut and do the right thing, protest be damned. Unfortunately, the show was canceled the same year, though it’s hard to say whether it was a direct result of the outcry or if interest was waning in general.

What’s more intriguing is that this wasn’t Betty’s sole act of defiance within the show; she interviewed a Black child on the special when it was considered controversial to do so. She paid respect to everyone, regardless of their race, gender, religion, or what have you. There’s a reason why she’s widely celebrated as a trailblazer of her generation: she didn’t offer any excuses or apologies. She just cared about giving people the respect they deserve.

Racial justice wasn’t the only focus of her activism, either. Throughout her life, she lent her support to myriad animal rights organizations, including the Los Angeles Zoo Commission, The Morris Animal Foundation, African Wildlife Foundation, and Actors and Others for Animals. The comedian had a natural affinity towards animals, particularly elephants and gorillas. She was part of the board at the Greater Los Angeles Zoo Association and regularly campaigned to raise more funds for the association.

Most incredibly, she was also a champion of LGBT equality. She pledged her support for same-sex marriage, saying, “If a couple has been together all that time – and there are gay relationships that are more solid than some heterosexual ones – I think it’s fine if they want to get married.” Additionally, she didn’t understand how some people could be “anti-something.” She was a proponent of minding her business, standing up for the oppressed, and carving her unique place in the culture through entertainment.

Kindness and consideration of somebody besides yourself keeps you feeling young.

Betty knew she wasn’t some prominent politician or royalty — she was ‘merely’ a television actress — but she was still extremely self-aware of her influence on the country. She made sure to strengthen causes that needed backing, those that required people to break the mold and upset the masses. She’d been a progressive since day one, and it’s because of people like her that we were able to delegitimize hateful sentiments that had dominated the country in those years. It’s because of people like her we were able to push the needle forward in terms of racial and gender equality. She set the standard, and we will forever be grateful.

Never let age be an excuse

Betty’s ninety-nine years on this planet is a testament to the tenacity of human kindness. You don’t need to be young or rich or particularly well-educated to treat someone with respect or compassion. Betty didn’t let her age hamper her ability to empathize with others, even if they were of a completely different background than her. She just prioritized building earnest relationships with people, and if progress came as a result, no problem. Age isn’t an excuse to be horrible to other people. If Betty White was able to extend so much love and admiration to everyone she’d come across over the years, anyone can do the same. Simply put, if people like her hadn’t raised their voices and resisted hatred and ignorance, our world wouldn’t have been the same. We wouldn’t have been the same. So the next time you blame someone’s bigotry on their “times,” remember Betty White. Listen to Betty White. Be like Betty White.