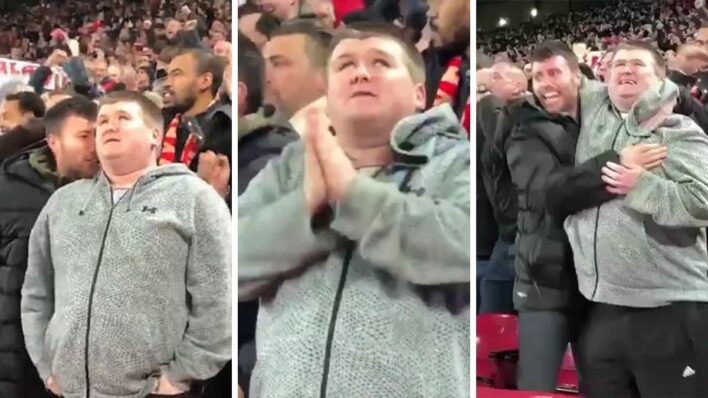 Mo Salah’s 2018 goal in UEFA Champion’s League was nothing short of spectacular. But it was a moment off the pitch that warmed the hearts of many when they saw the reaction of one fan.
By Joel Balsam    November 1, 2021

Mo Salah’s 2018 goal in UEFA Champion’s League was nothing short of spectacular. But it was a moment off the pitch that warmed the hearts of many when they saw the reaction of one fan.

Mike Kearney, who has had sight problems since the age of 7, has been a Liverpool fan for as long as he can remember. But even though his eyesight has gotten worse with age (he was 26 at the time of Salah’s goal), it doesn’t stop him from cheering on his beloved Reds.

“I’m like every other football fan — it doesn’t matter if I can’t see clearly, I still celebrate,” he told BBC Sport. “It was just relief that we scored.”

His cousin keeps him updated

During live matches, Kearney doesn’t listen to the announcer on the radio. Instead, he prefers listening to the crowd and his mates, who whisper all the details of the match in his ear.

“I like just being involved in the atmosphere and hearing what my cousin thinks – and anyone else, whether it’s five rows back and a pleasant comment or not,” he told BBC Sport.

Kearney says that while the games are blurry, it still feels normal for him.

I wish I could see more but that doesn’t mean I can’t form an opinion of my own.

“It’s difficult for people that can see to understand, but I think of it as normal to me and I have been like that all my life.”

It’s just the way I watch the game.

He met his hero

Salah, who now owns the Liverpool record for most Champion’s League goals, met with Kearney, according to BBC Sport.

Salah then awarded Kearney with a signed jersey that read: To Michael, your support is an inspiration.

What is it about Kearney’s reaction that’s so special? It’s how despite his disability, he’s still able to enjoy the best moments in life.

And for the rest of us, it’s a reminder to be grateful for what we have, and also to savor those sweet, precious moments.