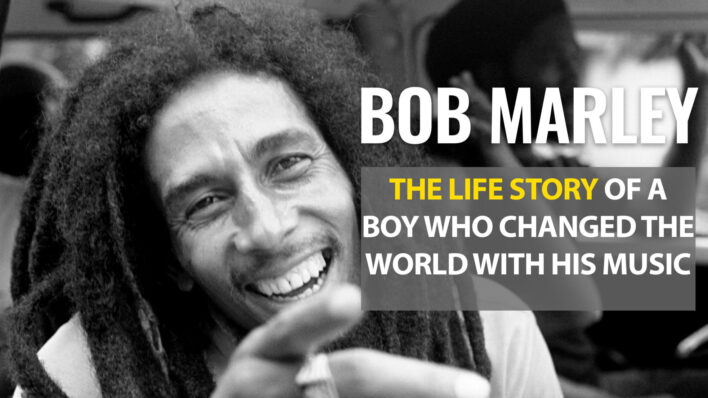 Bob Marley’s Life Story: How a Boy Rose from the Slums to Change the World with His Music

One of the best sources of inspiration are the life stories of successful entrepreneurs, leaders and famous people who achieved
By Lidiya K    December 25, 2017 One of the best sources of inspiration are the life stories of successful entrepreneurs, leaders and famous people who achieved a lot. We like reading about them, extracting the life lessons, seeing how they started and use it for inspiration to set some big goals.

But there are other people we should learn from and use as role models, who had nothing to do with business and materialism, but who lived a life worth talking about year after year. One such wise individual was Bob Marley, The King of Reggae, and you’ll now see stories from his life, how his mindset was formed over the years, what made him truly happy and how he changed the world with his music.

He celebrated life although he encountered plenty of difficulties. But he used them as stepping stones to find what he loves doing, be mindful and enjoy every day, and remind others that every moment counts and we should stop complaining and begin living fully.

Let’s see what Bob Marley’s life story looks like and what we can learn from it:

Early life and the birth of his unique philosophy

Born on February 6, 1945, in St. Ann Parish, Jamaica, Bob Marley was the son of a white 60-year-old plantation overseer and a black 19-year-old country village girl.

He lived in the slums of Jamaica in his early childhood, which usually leads to creating a mindset of blaming, negativism, revenge, hopelessness, and more. Instead, his heart was full of love, gratitude and joy. He first achieved that by using the hardships to come out stronger.

The first challenge life brought him that had to do with finding his identity, was his mixed race. That even led to being bullied.

His mother named him Nesta. However, the official institutions didn’t like it and changed it to Robert.

He spent his first years in a rural village, but later the family moved to Kingston, Jamaica, with hopes of making a better life for themselves. There, they continued living in poverty. Bob Marley was referred to as the ‘white boy’ by locals, as his face obviously had many features of the white race. That made him feel isolated from the people there, although he wanted to be part of the community.

Robert Nesta Marley decided that these events don’t necessarily need to shape who he is and what his future will look like. He accepted these roadblocks as parts of the journey, and didn’t let them cloud his vision or take control over his thoughts and peace of mind. He accepted that he’s part of 2 races, became confident about his origin, and considered himself on God’s side. He said that all this helped him develop his philosophy and that he was neither on the white man’s side, nor the black’s. Escaping poverty with the help of music

Bob Marley left school quite early and became an apprentice welder. He decided it’s best for everyone if he quits, after he had suffered an injury at work. But before that, one good friend from childhood not only shared his passion for music, but inspired him to learn to play the guitar.

Music was both his escape from reality — as he shares it’s what helped him deal with the poverty surrounding him — and his most favorite thing to do. As one of his most famous quotes goes:

One of Bob Marley’s main philosophies is that we should be living with free minds, and that we are the ones in charge. That if we decide to, we can free ourselves from the burden of all bad things existing in the world, and can find peace. He used music as a tool to spread his message and help people let go and feel good.

His neighborhood in Kingston was also the home of some good performers. He got to know a few good names in the industry, found inspiration in the face of successful artists, and also met a producer who wanted to give him a chance. Bob then recorded a few singles that did well and marked the beginning of his music career. After meeting someone else who shared his love for music, and getting the friend that inspired him to start playing the guitar when in school, the trio began writing songs.

A huge component of Bob Marley’s life story is starting his first band in 1962. It was named The Wailers as they considered themselves ghetto sufferers.

At that time Bob Marley was 17 years old, and he also meets his wife, and a person he considers his mentor – Joe Higgs –  who influenced his mindset and life. Soon after, Higgs begins coaching the new band and helps them with songwriting and singing. In 1970, Bob Marley founded a record label called Tuff Gong. Later on in England, The Wailers receive their first serious contract which brought them worldwide exposure.

Bob Marley’s first album is Natty Dread. At that period of his life he performs on stage with Stevie Wonder. The last show with The Wailers also happens at that time.

The band disbanded in 1974, with each of the three main members pursuing a solo career. In 1975, Bob had his first international hit – “No Woman, No Cry”, 13 years after recording his first song.

Most of Marley’s songs and live performances were an attempt to bring peace and help those in need. The profits from his collaboration with Stevie Wonder, for example, went for the Salvation Army School for the Blind.

What’s considered the cornerstone of his music, though, were his strong views on religion, politics and all social issues. He was against the materialism of the Western world and the control authorities were having over people. The king of reggae wanted to encourage everyone to fight for their rights, to believe they deserve more, to never give up or trust a politician, and to unite. Of course, that was highly influenced by the fact that he lived in poverty and experienced unfairness first hand, grew up when Jamaica gained independence and was thrown into a violent civil war.

Throughout his career, he wrote and sang about racism, unemployment, inequality and political violence in Jamaica and around the world. That turned him into an influential cultural icon and one of the most inspiring international artists.

There was an assassination attempt in 1976, and the person responsible for it was never found. Bob Marley was shot, but survived. The attack happened 2 days before he had a big concert, but that didn’t stop him from getting on stage in front of 80,000 people and doing what he does best – sharing his message with the world through his music.

He was asked why he decided to play even though he was injured. His answer was this:

“The people who are trying to make this world worse aren’t taking a day off. How can I?”

The reason for his actual death was cancer, and he refused to have treatment due to his religious principles. Things got worse during the next 4 years as the cancer spread to his brain. Bob Marley died at the age of 36 and was buried in Jamaica. His last words were: “money can’t buy life.” Bob Marley’s life is an example of following your passion, turning the negative into positive, inspiring generations, having a purpose and not giving up in the face of injustice.

That didn’t remain unrecognized. He was voted as one of the greatest lyricists of all time by the BBC. Rolling Stone ranked him as No.11 on their list of the 100 Greatest Artists of All Time. And Exodus was voted Album of the Century by Time Magazine in 1999.

When he died, he left a legacy like few artists ever could. His philosophy will live on as long as his music is with us, and every new generation will hear about the Jamaican musician who started from nothing and changed the world with his art.