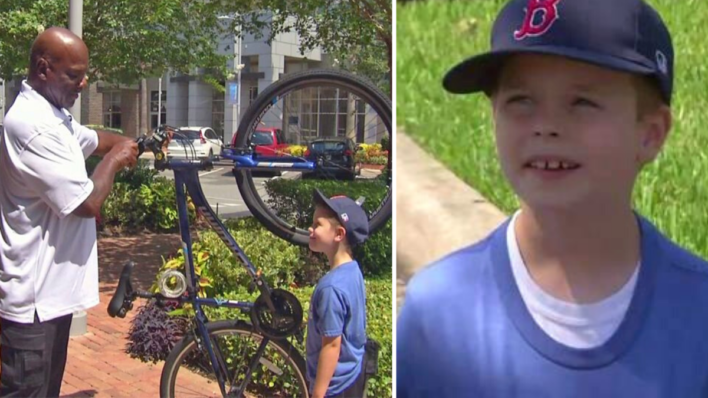 After witnessing an unfortunate incident where a stranger’s bicycle was stolen, a young boy decided to spring into action.
By Sophie Babinski    April 2, 2022

After witnessing an unfortunate incident where a stranger’s bicycle was stolen, a young boy decided to spring into action.

Showing generosity and kindness to strangers is not always a first instinct for most of us. Often, we would prefer to keep things to ourselves and live in our own comfortable bubbles. However, sometimes we are pulled to do the right thing– spread generosity and show selflessness when we encounter people in need. One young boy did exactly that when he witnessed an upsetting incident.

62-year-old John Taylor was dining at a local McDonald’s in Orlando, Florida, when he witnessed something horrible take place. Right in front of the window outside, John noticed a stranger grab his bicycle and take off with it. John scrambled to his feet and ran after the thief as fast as he could. Unfortunately, he lost his footing and took a tumble, giving the thief enough time to get away.

However, John didn’t give up. He waved down cars and tried to get help from passers-by. One such passer by, a local woman named Suzanne Nebe, stopped her car when she saw John calling for help. He asked her to chase the thief with her car, but she declined because she didn’t want to engage in any unsafe driving.

Nevertheless, she told John she would call the police and wait with him while he filed a report. During the incident, her young son Matthew was in the car, listening to everything. It was then that he had an idea.

Matthew had recently turned 7-years-old, and got a few Target gift cards for his birthday. He had the cards on him, and he decided that he wanted to use them to help John buy a new bike. While waiting for the police, John had explained to Suzanne and Matthew that his bicycle was his only means of transportation.

He relied on it to get to and from work, and rode hundreds of miles every week. Matthew was crushed when he considered the effect not having a bicycle would have on his new friend. So, he, his mother, and John went to Target, where Matthew used his own money to buy John a new bike.

I felt really really really bad, and I know he couldn’t get home. So, I thought to myself ‘What should I do?’ And, I decided to get all my gift cards that I had, and give them to him.

How a Little Boy’s Kindness Inspired a Cycle of Generosity

John was reluctant to accept Matthew’s gift, but he was touched and knew that he needed a bicycle. He couldn’t believe a young boy would be so selfless -– the incident had a great impact on him.

In fact, later that same day, John encountered his bike thief and got his bike back! Considering the kindness Matthew has shown to him, he decided not to be aggressive with the thief. He acted gracefully, and even decided to donate his old bike to someone in need!