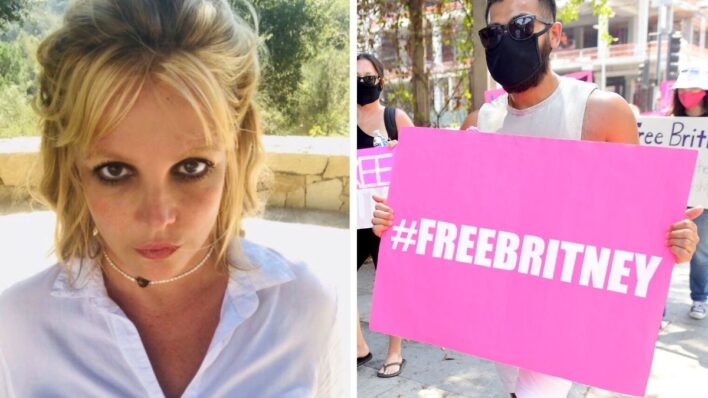 There are circumstances where celebrities find themselves in trouble and the public comes to their rescue. In the case of Britney Spears, the #FreeBritney movement is trying to do just that.
By Arielle London    March 16, 2021

There are circumstances where celebrities find themselves in trouble and the public comes to their rescue. In the case of Britney Spears, the #FreeBritney movement is trying to do just that.

When it comes to social activism, typically celebrities are the ones doing the advocating. Celebrities are powerful public figures that under normal circumstances the rest of us look to for guidance of some kind. Whether this dynamic is unfounded or not doesn’t make it any less true. Still, there are circumstances where celebrities find themselves in hot water and the public comes to their rescue. In the case of Britney Spears, the #FreeBritney movement is trying to do just that.

Britney Spears was the girl next door until she became the girl everyone loved to hate. The McComb, Mississippi born superstar burst onto the scene as America’s sweetheart with her single “Baby One More Time” in 1998. Britney was personable, likeable, friendly and overall a ray of sunshine wrapped in a talented package for the music industry to deliver.

Spears’ popularity exploded until her image took a major dive after her very public breakup with singer Justin Timberlake. The transition took place right around the time Timberlake released his infamous revenge track “Cry Me A River.” In the single’s music video, Justin paints an image of a Britney look-alike who has done him terribly wrong. From that point forward, Britney Spears was no longer viewed as innocent but almost tainted with a constant barrage of controversy by the public.

Britney became a tabloid fascination and paparazzi staple for years. Her every move was carefully scrutinized and documented to the point of abusive oversaturation by the media which almost dehumanized her entirely. But Britney’s down to earth personality was never forgotten by her fans. In The New York Times’ Framing Britney Spears documentary, multiple fans turned #FreeBritney activists spoke of the immense effect Britney, and her music, had on their lives. It would seem that not even the media could taint Britney’s image in the eyes of her true fandom.

Even though Britney Spears had been working and performing since she was a child, the tabloids’ fascination with photographing her (and tearing her apart) really began around the time of her engagement to Kevin Federline. Photos of Britney could be sold for up to $1 million dollars each at that time, making her the supply for the demand. The paparazzi problem truly turned into a circus however around the time of the announcement of her first pregnancy. Things only got worse once the baby was born and the media began to heavily spin the image of Britney as an unfit mother.

After Spears and Federline divorced, the unbearable media scrutiny continued and Britney’s mental health began to publicly decline. Britney shaved her head, then there was the infamous car-smashing umbrella incident, and finally Britney underwent involuntary psychiatric evaluations. This led to a temporary conservatorship with her father Jamie Spears as conservator of her person and estate.

A conservatorship is a legal agreement in the United States whereby a judge appointed guardian or protector is placed in control of an individual’s daily life and financial affairs. Conservatorships are typically reserved for the elderly however, they can also be implemented in cases where there are physical or mental limitations involved. What began as a temporary agreement was made permanent on October 28, 2008, over 12 years ago.

When the conservatorship was put in place, Britney was clear that she specifically did not want her father to be in charge of neither her person nor her finances. Despite Britney’s power and fame, her wishes were not granted, and Jamie Spears was instituted as the main conservator.

Britney worked nonstop for years under the conservatorship demonstrating a high level of functionality for a conservatee. Then October 18, 2018 Britney was slated to announce her Domination residency in Las Vegas but opted to say nothing instead, walking straight past an anxiously awaiting crowd. Spears later announced that she was not going to be performing for the residency after all. After this point, Britney disappeared.

Britney’s fans never forgot about her

With no signs of Britney on social media, her fans became frantic for answers and one day with an anonymous tip they got them. The hosts of a podcast centered on Britney Spears’ Instagram account, Britney’s Gram, were left an anonymous voicemail stating that Britney was in fact in a mental health facility and had been there for months. With the news of Britney’s confinement to the facility, the #FreeBritney movement was born.

#FreeBritney activists relentlessly advocate on Britney’s behalf to end the conservatorship and more specifically to remove her father Jamie Spears as conservator. Britney expressed that she wanted a bank to oversee her estate and that she would not work until Jamie was no longer in charge of her career. Finally, on February 11, 2021, Britney experienced a partial victory in her case when a judge declared a bank, Bessemer Trust, as co-conservator of Britney’s estate. Bessemer Trust and Jamie Spears now have equal powers where Britney Spears’ finances are concerned.

The door is still open to remove Jamie Spears from the conservatorship altogether down the line. However, right now #FreeBritney activists are still on their grind trying to help secure Britney’s freedom. The next court hearing is scheduled for March 17, 2021 and there is even another one scheduled in April after that. The case is ongoing and the #FreeBritney movement is watching closely. Republican representatives Jim Jordan and Matt Gaetz have written a letter to the House Judiciary Chairman Jerrold Nadler, calling for a congressional hearing on conservatorships. In the letter, Jordan and Gaetz cite Britney Spears and Jamie Spears by name.

Other celebrities have also taken a stand for Britney

After the Framing Britney Spears documentary aired on Hulu, Hollywood A-Listers such as Bette Midler, Sarah Jessica Parker, Andy Cohen and Courtney Love all publicly came to Britney’s defense. Spears’ boyfriend Sam Asghari also defended Britney online after the NYT documentary came out. Asghari specifically called out Jamie Spears’ attempts to control their relationship and throw “obstacles” their way. While Britney’s longtime love expresses a rare insider’s perspective, for many, the severity of what Britney has been going through behind closed doors has truly been completely out of sight until now.

The New York Times shined a light on Britney’s plight with their documentary giving others the opportunity to stand up for what is right. Many can relate to Britney Spears’ story as one of disproportionate control, either at the hands of a parent, guardian, or even a system. In the face of injustice we are taught “when you see something, do something.” Well, we couldn’t see Britney’s struggle before, but now that it is out in the open more and more individuals seem to be supporting #FreeBritney, giving greater credence to her fight.

There is hope for the famous pop star to finally gain back the freedom she lost over a decade ago with these new developments. Between the people power on the ground in the #FreeBritney movement to the ranks of government getting involved, this story appears as though it is not going to go anywhere anytime soon. At least not until justice is served, and according to millions of people around the world, that justice will only arrive when Britney Spears is finally free.

You have what it takes to inspire change

What was previously unseen has now come to light, giving both Britney and all of those in similar positions greater visibility in the eyes of the public. Fighting for #FreeBritney is about more than just freeing one beloved pop star, it is about all of those under unfair conservatorships regaining control over their own lives. If collectively we can #FreeBritney, then hypothetically we can free others in similar situations.

Suddenly the possibility for change is on the horizon for a demographic that is too often forgotten about or quietly hidden to the side. To empower even just one person who has been silenced or stripped of their autonomy can bring forth a chain reaction of voices standing up for themselves, others and for generations to come. #FreeBritney and you open the possibility to free so many more.

To quote the legendary Britney Spears in her now prophetic song Overprotected, “I don’t need nobody telling me just what I wanna, what I, what, what, what I’m gonna do about my destiny.” Everyone deserves to be in control of their own destiny. Reclaiming your power may sometimes be a fight, but in the end it’s always worth the battle. Reinstating Britney’s autonomy can inspire others around the world to seek the same and live their lives even more fully. No matter what your situation, there is always hope. Always keep the faith no matter how difficult things may get, you never know when things just might turn around for the better.