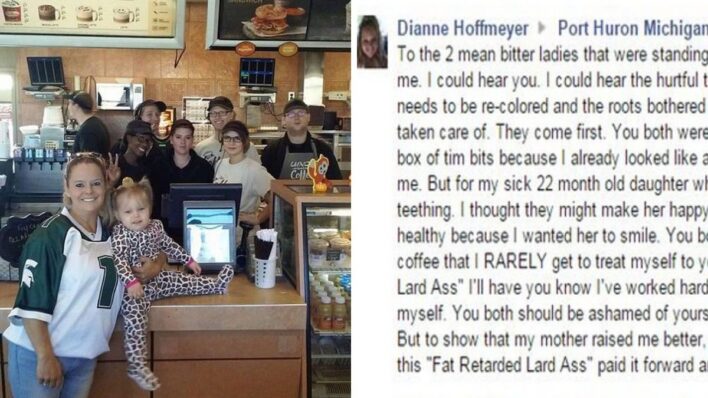 One woman decided to use a different approach when she was rudely mocked in a crowded restaurant.
By Aly Walansky    October 12, 2021

One woman decided to use a different approach when she was rudely mocked in a crowded restaurant.

Many of us may have experienced bullying firsthand but it’s how we handle and respond to it that speaks to . When Dianne Hoffmeyer was ridiculed by two women for her appearance, she decided to take the higher road and perform an act of kindness instead.

Dianne’s story went viral and everyone praised the amazing way she handled a situation that could have easily gotten out of hand. Her response sets a wonderful example for all of us.

Bullied for being “different”

It started off as a normal day for Dianne when she was waiting in line with her 22-month-old child at Tim Hortons in Fort Gratiot, Michigan. Suddenly, she heard two women making mean and hurtful comments behind her in the line.

“‘Oh look at her hair! It’s nasty looking, and the roots are coming through,'” she heard one woman saying. “‘Oh, she’s a whale, oh the whale needs to eat.'”

Hoffmeyer then ordered herself a cappuccino, prompting one of the woman behind her to comment, “Oh, even the whale needs to have liquids. Maybe she should go back into the water.”

“I just instantly started to cry because it hurts,” Hoffmeyer told WXYZ, an ABC-affiliate. “I don’t know the women. I’ve never seen them or met them and I don’t know why they would choose to say something like that.”

The beautiful reason behind her action

It would have been very easy for Hoffmeyer to return that hate with more hate, but instead she decided to be a positive role model for her child and be kind.

“I told my cashier ‘I’ll pay for their coffee’ and [the cashier] was like, ‘What!'” Hoffmeyer said.

The chain’s manager, Brittany Sanders, told ABC News they were floored at what Dianne had done.

“The next day, we gave her a gift card and a Tim Hortons travel mug, and she was very pleased,” Sanders said. “I felt she did the right thing by killing it with kindness and paying it forward. She handled it very well.”

Despite this incident, Dianne said that she would like to buy the women another cup of coffee if she met them again and would tell them how she felt when they had verbally attacked her.

Dianne’s story proves that no matter the circumstances, we can always choose to break the cycle of hate and instead put kindness back into the universe!

One act of kindness can drastically change someone’s day.