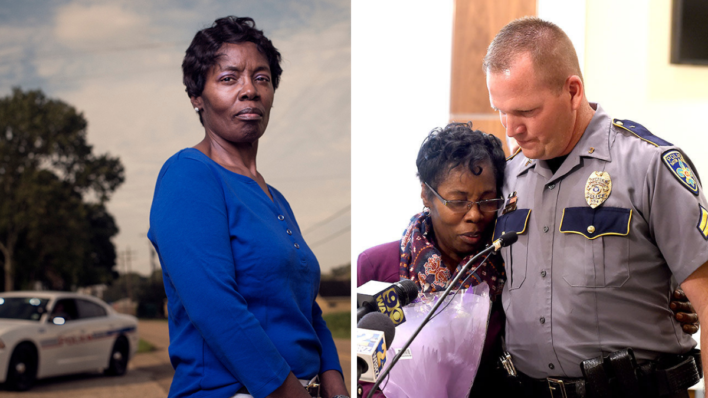 We never know when the moment will happen that instantly changes everything – for us, or someone else. In the
By Aly Walansky    September 3, 2021

We never know when the moment will happen that instantly changes everything – for us, or someone else. In the case of Vickie Williams-Tillman, both moments happened on a routine Sunday as she ran some local errands.

Williams-Tillman was out and about, on her way to do some shopping at Sam’s Club and Walmart. She was on her route, listening to some gospel music, when suddenly she was stopped in her tracks by what she saw – a police officer struggling with a man on the side of the road.

She immediately sprang into action, instinctively knowing something was amiss and rolled down her window, asking if the officer needed her help. She couldn’t hear his response, but she did meet his eyes.

“I could see in his eyes he needed help. You don’t have time to think about it … I did what God needed me to do.”

That was enough to know that the officer was in trouble, and Williams-Tillman was ready to assist. She jumped on the attacker’s back and did her best to subdue him until police backup arrived.

“Vickie Williams-Tillman epitomizes the true Good Samaritan,” Mayor-President Sharon Weston-Broome said in a statement. “She reached out and offered a courageous and unconditional response to the officer. Ms. Williams-Tillman is a hero and demonstrates the true meaning of loving God and loving your neighbor.”

Williams-Tillman is so special because she didn’t even stop to consider herself before she jumped in to help a stranger. “It was something that went through my soul,” she said. “You don’t think about the risk.”

The police officer had found the man asleep in his car, with drugs by his side. When the office asked the man to exist the car, the man became aggressive, and stole the officer’s baton, which he then used to beat him. The attacker also tried to steal the officer’s gun from his holster. Tragedy could have occurred if help hadn’t arrived.

The man was detained with the help of a stun gun fired by a second officer at the scene.

Williams-Tillman later spoke with the officer, and even gave him a hug.

“A lot of people passed him up,” Williams-Tillman said. But she could never do that to anyone, especially a police officer. “They’re human beings, just like us … We’re all one family.”

“Mrs. Vickie Tillman is a true hero,” wrote the officer’s brother on Facebook. “She stopped to help my brother … when he needed help with a suspect. My prayers are with her and her family. Thank you Mrs. Vickie, we love you.”