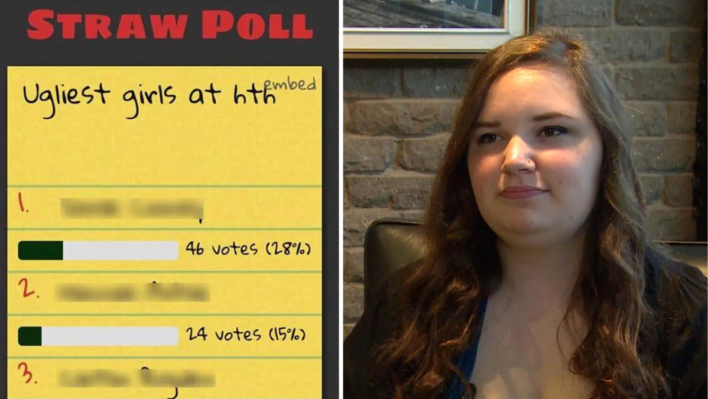 Despite the hurtful taunts from her classmates, the victim chose to help others see the beauty in themselves.
By Sophie Babinski    November 10, 2022

Despite the hurtful taunts from her classmates, the victim chose to help others see the beauty in themselves.

Being a teenager often means dealing with unwanted issues like bullying, insecurity, and puberty. There is no avoiding these things as they are a part of growing up and help shape us into the adults we become.

However, one young girl in Canada faced bullying that was especially cruel and hurtful. Instead of letting it defeat her, she used the incident as an opportunity to have her voice heard.

How One Teen’s Classmates Bullied Her at School

She was very upset by this, but decided to hold her head high and respond to the anonymous bullies.

RELATED: Bullies Call Mom A “Whale” In Front Of Everyone – Her Response Takes Them By Surprise

“I know that I’m not the prettiest thing to look at. But I’m funny, nice, down to earth, not judgmental, accepting, helpful, and I’m super easy to talk to. That’s the same for every other girl on that list that you all put down.”

Twelve people had voted for Lynelle in the poll, and her post went on to address them specifically, writing: “I’m sorry that you don’t get to know me as a person.”

Lynelle was satisfied with her response. She had defended herself and the other girls in the poll, and that was good enough for her. However, the post quickly went viral and the responses made her feel better than she could have imagined.

How Standing Up for Herself Inspired Her Peers

Lynelle’s post quickly went viral and was shared thousands of times in the hours after it was posted. She received hundreds of messages congratulating her on how she handled the abuse.

Even though Lynelle admits that the poll really hurt her feelings, she felt she should suck it up, set an example, and stand up for herself and the other girls who were also affected by the incident.

RELATED: Woman Cruelly Teased And Called ‘Piggy’ By Bullies Gets The Last Laugh

The messages of support she received after her response made her feel better than ever and sent her self esteem soaring.

Lynelle’s story proves that standing up to bullies can help more than just the victim. It can inspire others and give them the courage to see the good in themselves despite the mean things that are said.

Bullies Throw Boy’s Shoes In The Toilet At School – One Week Later, A Student Shows Up At His House