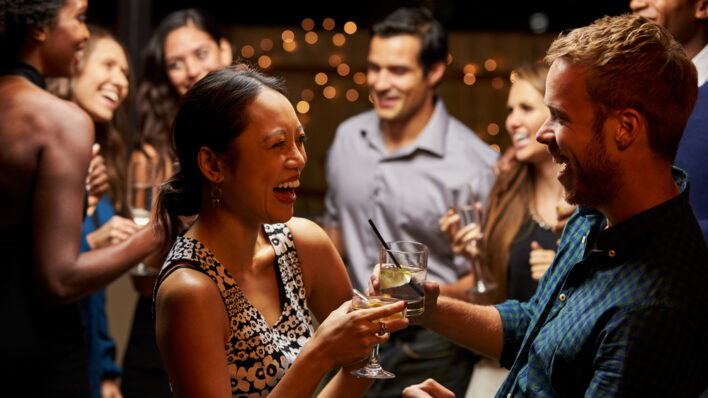 Can You Really Fake It Till You Make It? Science (and This Laughologist) Says Yes

“Fake it till you make it.” It’s a phrase you’ve undoubtedly heard at least once in your career, but is
By Barbara Pavone    December 12, 2018

“Fake it till you make it.” It’s a phrase you’ve undoubtedly heard at least once in your career, but is

“Fake it till you make it.” It’s a phrase you’ve undoubtedly heard at least once in your career, but is it true? Is there any weight behind the idea that acting a certain way can influence where life takes you? Can acting successful bring you actual success? Yes, says a new documentary titled You Are What You Act, which explores the budding field of embodied cognition.

“I was reading the newspaper when I saw a story about Tom Cruise rescuing someone from a violent mugging and I thought, ‘That’s weird. It sounds like a scene out of a Tom Cruise movie,’” stars award-winning director Albert Nerenberg, revealing the inspiration behind the doc, which premiered at the Illuminate Film Festival earlier this year and won Best Documentary.

Teaming up with Academy Award-winning producer Frederic Bohbot (The Lady in Number 6), Nerenberg, a laughologist who invented competitive laughing (really) and directed the feature documentary Laughology, set out to discover if smiling can make you happy, having better posture can make you confident, and acting like you’re in love can make you fall in love. “I did a bit of research and I realized it wasn’t just Tom Cruise, but dozens of actors, mostly of the action star variety, who had performed rescues in real life,” says Nerenberg. So he dug deeper and discovered the growing field of embodied cognition.

Describing it as “the science of the way the body thinks,” Nerenberg explains, “Some of the conclusions of the science are that the brain always thinks with the body, constantly. It uses body metaphors to understand everything and explain everything. Also, the movements of the body affect the brain.”

“The way you move your body shapes who you are,” he elaborates. “This has implications because our education system works on the assumption that we are just heads carried around by slave bodies, and most of us ignore or deny our bodies’ actual needs.”

Expert Tips for Faking It… the Right Way

So, can you really become the best version of yourself simply by acting the part? “I don’t want to be too ‘motivational speaker,’ but I believe that we’ve done a lot of research around positive thinking, but very little around positive acting,” says the director. “I think the way you act has deeper implications for who you are.”

“You can fake your way to greater confidence, greater extroversion, greater attractiveness. You can also fake your way to more happiness and to even deepen love. Fake is kind of the wrong word, as it implies some deceit, but it still has to be calibrated to the situation.”

Take your career, for example. “If you walk into a job interview and power pose like an idiot, you certainly won’t get the job. But if you come with a confident and energetic posture, you might,” he points out.

Same for your personal life. “If you walk up to your lover and act like the world’s greatest lover, good luck to you,” he laughs. “In the case of love it’s more about sharing behaviours that culture love.”

Nerenberg’s advice for successfully faking it till you make it? “Find confident postures that work for you. The rules are: Take up more space and stand straight. Engage in these postures when the situation demands it like public speaking or at a meeting. Otherwise, be humble.”

How Laughing Can Change Everything

Above all, don’t forget to laugh. “Laughter is an empowering, stress-reducing behaviour that can go much deeper than many people imagine,” says Nerenberg. “A lot of people’s lives are way too serious. And when they realize that, they get even more serious. Laughter is the antidote to over-seriousness. Laughter can really destress you and connect you to other people.”

If you’re having trouble doing just that, don’t be afraid to seek a little push from the outside. “There are now techniques — Laughercize, Laughter Yoga, Laughter Therapy — that help people laugh more.”

Which is important because, yes, smiling really can make you happier. “This is a good example of fake it till you make it,” he adds. “Let’s say you’re having a flat day. There’s research that says the act of smiling, even faked, actually biases your brain to find more things to smile about. If you’re open to it, you notice those things and your day likely improves and, before you know it, you’re smiling for real and people smile back because smiling is contagious.”

You Are What You Act airs on the Documentary Channel in Canada on January 6 at 9pm EST.