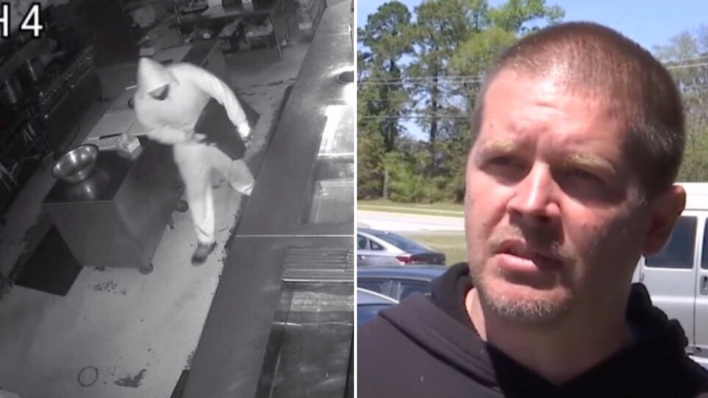 When a restaurant was broken into by a thief, one man decided to offer him a job instead of jail time.
By Lindsey Staub    March 3, 2022

When a restaurant was broken into by a thief, one man decided to offer him a job instead of jail time.

When Carl Wallace, the owner of Diablo’s Southwest Grill in Augusta, Georgia, saw that the glass on the front door of his restaurant was shattered, his initial reaction was anger.

Scene of the crime

“They’re risking so much every time they do this: To the business owner, to themselves, or what could happen if the police show up during the process of the break in,” Wallace said.

From anger to understanding

Soon, though, the feeling of frustration converted to forgiveness as Wallace turned to Facebook to explain to his patrons why the storefront looked different, even referring to the style as “hurricane fabulous.”

“Our burritos are such a smash hit we’ve got people breaking in at 4 a.m. for their fix,” Wallace joked in his post.

Instead of purely blaming the burglar, Wallace, who has been running the business for eight years now, tried to understand what motivated him. Wallace went as far as to offer the burglar a job, understanding that what he needs most is a way to make money.

“To the would-be robber who is clearly struggling with life decisions or having money issues… please swing by for a job application,” Wallace wrote. “There are better opportunities out there than this path you’ve chosen.”

He included his personal phone number, urging the thief to contact him.

“No police, no questions. Let’s sit down and talk about how we could help you and fix the road you’re on. Sincerely Carl,” he posted.

This robbery was not an isolated incident: Wallace is pretty sure the same person has targeted at least two other businesses nearby that have surveillance footage that matches his. By reaching out personally to the burglar, he wants to “break the cycle,” he told Yahoo News.

“We all as humans have to have a level of forgiveness to each other, and try to find a better way because there’s so much hate in this world… we don’t understand each other’s problems and challenges in life,” he said.

The Facebook post showing Wallace’s compassion has gone viral with many of the commenters promising to order from Diablo’s to ensure that Wallace can keep helping people in need.

Forgiveness is powerful, giving some the opportunity to learn and grow and others the opportunity to help and understand. By offering the burglar a job, Wallace has shown his compassion and given the thief another chance. As humans, we all make mistakes, and forgiving each other is our greatest power.