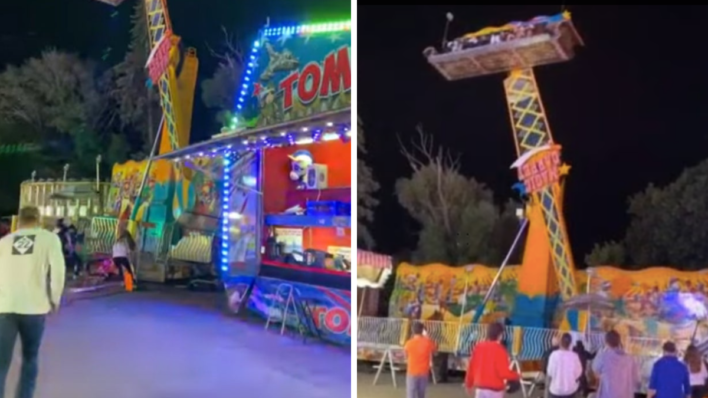 Despite looking rusty and rickety, carnival rides are usually safe — but apparently not always. One malfunctioning ride drove its riders
By Joel Balsam    July 19, 2021

Despite looking rusty and rickety, carnival rides are usually safe — but apparently not always. One malfunctioning ride drove its riders to tears, but thankfully, a group of festival-goers teamed up to stop the ride and save the day.

Shaking out of control

It was a sight that made someone taking a video of the incident shake in fear.

A ‘Magic Carpet’ carnival ride at the National Cherry Festival in Grand Traverse County, Michigan, started to shake out of control like it was going to tip over. The shaking was so bad that a fence surrounding it appeared to fall over.

According to local publication Up North Live, a member of their own staff, Trevor Drew, was on the ride and explained what it felt like.

“The ride goes, and I guess it’s kind of hard to tell once you’re in the air,” Drew said. “I could tell it was a lot more violent and seemed a little more shaky.”

A witness on the ground, Joy Ogemaw, saw it from the ground and told the publication what it looked like.

Heroes jump in to save the day

According to its website, the National Cherry Festival began in 1926 and attracts over 500,000 people over eight days. The festival is so popular that President Joe Biden was there earlier this month.

But this wasn’t the festival’s sweetest moment.

Before the ride swayed back and forth for long, a quick-thinking carnival-goer on the ground ran to its base to hold it in place. Then, others followed.

As seen in a video taken by a witness, the ride began to slow down, though it didn’t come to a full stop until the heroes on the ground jumped in and slowed it themselves.

The ride was taken away and investigated

“Just goes to show you what type of people live here in Traverse City, that they without even a second thought will go right over and do whatever they need to, you know for one of their own, and we think it’s remarkable that they were willing to help you know keeping themselves safe on the outside, but doing whatever they could do, to slow the right to stop the ride,” said Joe Evans of the company that owns the ride, Arnold Amusement, to Up North Live.

“Unfortunately that ride the way that is designed, it doesn’t stop on a dime, you can’t just hit a break in it instantly stop, it has to come down, you know, and unfortunately, swing back and forth you know until it comes to situations like this.”

Evans added that the ride was immediately removed and an investigation is underway.

“Obviously there was a malfunction. We don’t know as of yet what it was. The ride has been dismantled. It is gone and it is on its way back to the factory, the company that makes it is in Ohio, and it’s on its way down there for them to figure out what happened,” he explained. “Was it a malfunction? Was a computer glitch? We don’t know. We’re just not sure what it was.”

Don’t underestimate the power of humans working together

It’s uncomfortable to imagine what it must have been like for those on the ride while it was shaking out of control. Heck, it’s hard to imagine being on the ground watching it happen. But a potential disaster was transformed into a heartwarming story of the power of strangers working together instead. And that right there is worthy of renewing our faith in humanity.