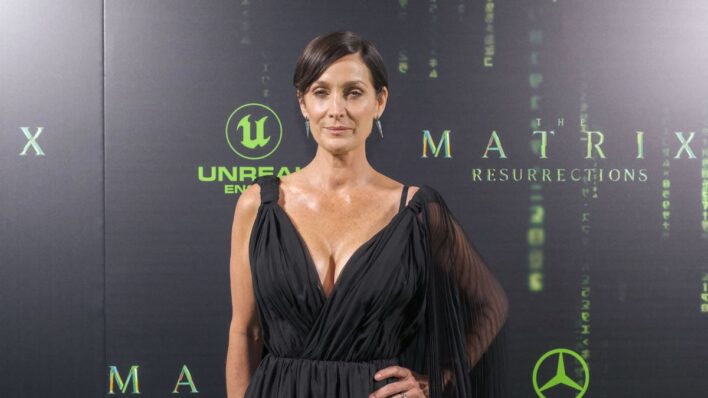 Canadian actress Carrie-Anne Moss arrives for the premiere of "The Matrix Resurrections" at the Castro Theatre in San Francisco, California, December 18, 2021. (Photo by David Odisho / AFP) (Photo by DAVID ODISHO/AFP via Getty Images)

What Happened to Carrie Anne Moss? The Matrix Actress Who Is Making a Comeback

The 54-year-old opens about a harrowing casting decision she faced upon turning 40 and how it changed her perspective on aging.
By Shaoni Das    December 21, 2021

The 54-year-old opens about a harrowing casting decision she faced upon turning 40 and how it changed her perspective on aging.

Hollywood is often characterized as a magical place where everyone’s dreams can come true; where any aspiring performer, irrespective of economic class, gender, race, ethnicity, sexual orientation, religion, or age, can shine and tell their story; where you can fulfill your passion, become internationally beloved, and amass enough wealth for generations upon generations.

Yet, there is a reason why it’s called La La Land – it’s a fantasy through and through. The rules don’t apply to everyone; in fact, there are no rules at all, one might say. Some people happen upon the right opportunity at the right time and can launch themselves into stardom overnight, whereas others are working themselves to the bone, settling for far less than what they deserve because they believe in themselves and the craft.

And there are some personalities who, despite gaining prominence early on, are unable to parlay their initial success into sustained acclaim. Sometimes this is of their own doing, but most of the time, it’s the consequence of a cold and highly transactional industry that values the status quo over anything else. Just look at The Matrix star Carrie-Anne Moss: she was slated to be the next sensation in the early 2000s.

The Canadian actress exploded onto the scene as Trinity in The Matrix franchise, followed by a slew of other notable projects in the early aughts, including Memento and Chocolat. The future was looking bright: if she continued on her current path, she would likely have been a household name, like many of her contemporaries. However, something changed by the mid-2000s, and Carrie-Anne found herself struggling to get the type of roles she desired. Her most recognizable performance post-Matrix was in the Marvel series Jessica Jones, where she played Jeri Hogarth, but this was released in 2015 – nearly sixteen years following the first Matrix film. Clearly, a decline had happened, but it’s always risky to put your finger on one driving factor, especially nothing is confirmed.

Carrie-Anne had opened up about the issue of ageism in the industry, particularly how it impacts women exclusively. It’s universally known at this point that there is a difference of night and day between how women and men are perceived in accordance with their age.  However, in her heyday, she had no idea she herself would succumb to the trend. “You don’t feel like you’ve aged much, and suddenly you’re seeing yourself on screen,” she told the Hollywood Reporter.

She also revealed how she was asked to play a grandmother a day after turning 40. “I was reading a script that had come to me, and I was talking to my manager about it. She was like, ‘Oh, no, no, no, it’s not that role [you’re reading for], it’s the grandmother,’” the 54-year-old shared. The Matrix may have earned her the distinction as one of the most promising, alluring actresses of her generation, but it only takes a couple of years for women to lose their crowd appeal — at least, in the eyes of the movie executives calling the shots.

You don’t feel like you’ve aged much and suddenly you’re seeing yourself onscreen […] I went from being a girl to the mother to beyond the mother.

Carrie-Anne Moss to the Hollywood Reporter

Furthermore, nothing exemplifies the double standard more powerfully than Keanu Reeves‘ subsequent rise to fame. Carrie-Anne’s fellow Matrix co-star continues to be one of the most renowned leading men of our times, with countless blockbusters under his belt. He’s three years her senior, but age has never gotten in the way of his professional trajectory. Instead, you could argue it’s actively fueled the audience’s demand for him. With Carrie-Anne, she went from a coveted to washed-out within a span of a few years.

Her journey underlines the double standards of age in Hollywood

However, with the release of The Matrix Resurrections, it’s time to revive the ageism discourse and envision a world where older women are just as appreciated as their male peers. Despite not being able to dig into her preferred opportunities, Carrie-Anne never gave up on the grind and put in a shift where she could. Her body is work is impressive and illustrious, and just because she hasn’t been able to secure top-billing in the last fifteen years doesn’t mean she’s any less talented. She never ‘went away’ as such; the media just stopped fixating on her when other women came along.

What’s more crucial is how Carrie-Anne feels about aging herself. “I would look at these French and European actresses, and they just had something about them that felt so confident in their own skin,” she said. She doesn’t know if she is at their level of self-love just yet, but she “strives” for it nonetheless. At the end of the day, she admits it’s not “easy being in this business,” adding that there continues to be external pressure on her.

Thankfully, Carrie-Anne knows her self-worth and told herself in the beginning that she would stop being an actor if she were asked to “change everything about herself.” Plastic surgery, for example, has become a standard recommendation imposed upon women as they get older, but Carrie-Anne knew it wasn’t the answer. She wanted to stay true to herself, and undergoing dramatic changes could never remove her insecurities. Therefore, she eschewed the harsh beauty standards to focus on her work.

I would look at these French and European actresses and they just had something about them that felt so confident in their own skin. I couldn’t wait to be that. I strive for that. I

Carrie-Anne Moss to the Hollywood Reporter

Besides, it’s not like her life isn’t extraordinary or fulfilling enough outside of her career: she’s been married to her husband, Steven Roy, since 1999, with whom she shares two sons and a daughter. She’s the founder of Annapurna Living, where she seeks to empower other women to “take charge of their own experience of reality.” There’s a lot of upward momentum around her, so instead of poring over the past, let’s celebrate her present and future.

Never lose sight of your worth

The world will do everything in its power to break you down, but only you have the final say. You’re the only person capable of understanding your true worth, so never stop keeping count of what you deserve and how people should treat you. Carrie-Anne Moss experienced quite the wake-up call at 40, but she never buckled under the strain. She kept working, with dignity and pride, because why should you ever sacrifice something just because someone else has a different expectation of you?

Aging is an irreversible, continuous process that will occur whether you like it or not. But it doesn’t give anybody the right to see you as disposable or weak, so make sure you’re conscious of your worth and the value you bring to the table. If you keep this in mind at all times, nobody will ever be able to touch you.