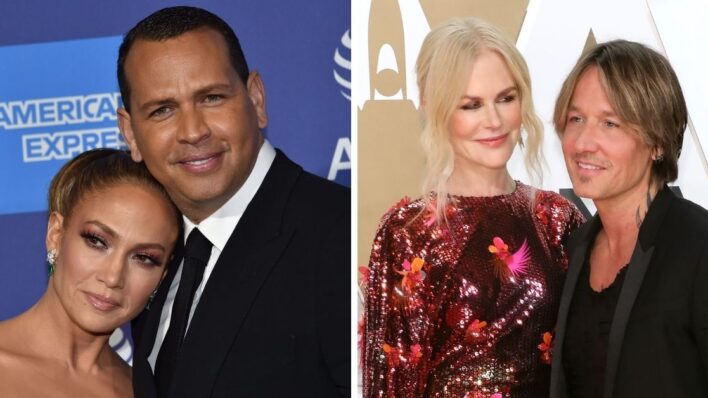 Love will find its way into your life in the strangest of times.  A lot of people in our society
By Shaoni Das    October 28, 2020

Love will find its way into your life in the strangest of times.

A lot of people in our society think that they have to settle down, get married, and start a family by a certain age. Women, in particular, have been conditioned to believe that their body is a timebomb and if they fail to find a partner at the right time, they might end up being single forever.

Thankfully, reality has shown us time and again that you can safely set aside those fears. A number of female celebrities have beaten the odds to find love later in life. A lot of these women had been through devastating heartbreaks and dramatic break-ups in the past so it wouldn’t have been a huge shock if they chose to remain single forever. But through a process of healing, trust, and taking chances, they’ve been able to find love regardless.

The way in which these women have been able to confront their fears over finding love is a testament to the human spirit. That’s why it’s worth taking a moment to appreciate these celebrities who managed to get into fulfilling, romantic relationships despite being in their forties and fifties.

These famous women share their lessons about finding love later in life:

Cameron Diaz and Benji Madden: timing is everything

Cameron Diaz has been in many high-profile relationships over the years, including the likes of Justin Timberlake, Jared Leto, and Alex Rodriguez, but none of those relationships made her seriously consider marriage. In fact, at some point in her early forties, she proclaimed that she would never get married.

Instead, Cameron chose to focus on her physical and mental health in her forties. She knew that she had to put herself first and figure out her own passions and ambitions before anything else. Cameron certainly wasn’t expecting a man to come into her life and change her world. But that’s exactly what happened when she came across Benji Madden of Good Charlotte in 2014.

Benji’s arrival made her change her mind about marriage and family, and she finally realized that it had been worth it to wait all these years for the right person. Cameron eventually retired from the entertainment industry, and she and Benji ended up welcoming their baby girl through surrogacy. She became a wife at 42 and a mother at 47. As a result, Cameron continues to caution women against jumping into new relationships when they don’t really know what they want from their own life. She said in 2016:

Jennifer Lopez and Alex Rodriguez: they make each other better in all the right ways

J-Lo is seen as one of the most powerful women in Hollywood but she’s actually been fairly unlucky in love for most of her career. The actress-singer had already been through three marriages and a couple of engagements when she met former baseball star Alex Rodriguez, also known as A-Rod, at a restaurant in February 2017.

The pains from divorce and infidelities were still fresh for J-Lo — she didn’t know whether she was ready to get back in the dating pool. But Jennifer never gave up on herself; she was determined to heal, learn, and welcome romance back into her life anyhow.

Since then, the two have gotten engaged, become business partners, and have even created their beautiful blended family, complete with J-Lo’s two kids and A-Rod’s two kids from previous relationships. On being with Alex, J-Lo said:


This is the first relationship I’ve been where I feel like we really make each other better. We complement each other, and there’s really pure, true love.

Though the two have been engaged for well over a year, fifty-one-year-old Jennifer has said that she and Alex are in no rush to get hitched. She said that she’s learned her lessons about jumping into these things way too quickly, so she wants to take her time with Alex and cherish every moment with him.

Salma Hayek and François-Henri Pinault: she’s proud to be a late bloomer

Salma Hayek was 42 when she married French billionaire François-Henri Pinault. They’re also parents to a thirteen-year-old daughter named Valentina. In the years since her wedding, Salma has spoken at length about how she, like many other celebrities, had been with men that only ended up hurting or disrespecting her.

When François came into her life, she realized what it felt like to be with a man that not only liked her independence but actively encouraged her to keep it going. Salma is a self-proclaimed “late bloomer” and she’s proud of it. She even said that she was glad to be a mother at 41 as that meant she had tons of experience required to properly parent her daughter. On her relationship with François, she said:


I wish I knew [when I was younger] that I was going to fall crazy in love with the perfect man. I was so worried, and I dated some people I shouldn’t have dated. […] I wish I could say to myself, ‘Hey, chill out. You’re going to get a great husband that’s going to adore you.’ I would have saved myself a lot of personal drama.

The pair have been together for nearly fourteen years and they’re still completely in love. François supports Salma in all her career aspirations, even when she herself is afraid to undertake film projects. In fact, when she is doubtful, he tells her that he doesn’t want the world to be “deprived of her work.” If that isn’t true love, we don’t know what is.

Power couple Nicole Kidman and Keith Urban were married in June 2006 following a brief courtship. The two had first met at an event honoring Australians in entertainment just a year prior and were just instantly enamored with each other. After a little bit of hesitation, Keith made the move and asked her out.

Reflecting on the time, Nicole has said that they were “two lonely people” who were able to open up to each other despite everything that had occurred in their lives up until that point. “We were a mixture of frightened and brave,” said Nicole. Nicole was nearing 40 when she tied the knot with Keith, and their daughters Sunday and Faith Margaret were born while the couple was in their forties.

At no point did Nicole ever let societal expectations ruin her romance. She had had a rough go of marriage with Tom Cruise and as a result, had thrown herself into work in order to avoid getting hurt yet again. Yet getting together with Keith at a later age was an “unexpected turn of events” for Nicole. She elaborated, saying:


I wanted it and I dreamed of it but I had no idea if it was actually going to happen. I feel beyond blessed to have this incredibly deep and powerful relationship I have with him, and that our children are the recipients of the love we have for each other too.

Gwen Stefan and Blake Shelton: they both healed each other after divorce

Perpetual cool girl Gwen Stefani had been badly burned by her relationship with ex-husband Gavin Rossdale, who is reported to have cheated on her multiple times over the course of their marriage. Yet she kept her mind and heart open — love was lurking in the corner.

Gwen announced her relationship with country star Blake Shelton in November 2015. They met on the show The Voice and it didn’t take too long for the two of them to warm up to each other. As a couple, the two have been blowing away everyone’s mids with joint performances, singles, music videos, judge face-offs on The Voice, and more.

The best part about their relationship is that they came into each other’s lives at just the right time. Blake had recently gotten divorced from Miranda Lambert and Gwen had split from Gavin. As a result, they were able to provide much-needed support to one another. 51-year-old Gwen said that Blake was able to help her heal in the wake of her divorce. She said:


I feel as if I spent the last four years healing—you know, trying to build my life again. Having a best friend like Blake to help me do that has been one of the greatest gifts.

Blake has also proved to be a remarkable helping hand in terms of raising Gwen’s three kids — he’s practically become a super step-dad. The two actually announced their engagement earlier this week, so wedding bells will be ringing sooner rather than later for the superstar couple.

Relationships may come and go, but true love will find its way no matter what. It may seem like a Disney concept to you but if there’s one thing you can take away from these celebrity stories, it’s that love doesn’t bother with abiding by traditional expectations. A lot of us will have faced personal tragedies, break-ups, infidelities, deaths, and heartbreaks in life but that doesn’t mean we are doomed to be miserable, lonely, and helpless.

As long as you reserve some space in your heart, there’s no way someone special doesn’t walk into your life and blow your mind away. Of course, the most essential thing is that you do prioritize your own wellbeing and that you tell yourself that you’re worthy of love. Age, after all, doesn’t have any control over the dynamics of romance — it’s just a number designed to categorize our life. So do not, under any circumstances, let your age get in the way of you finding happiness.