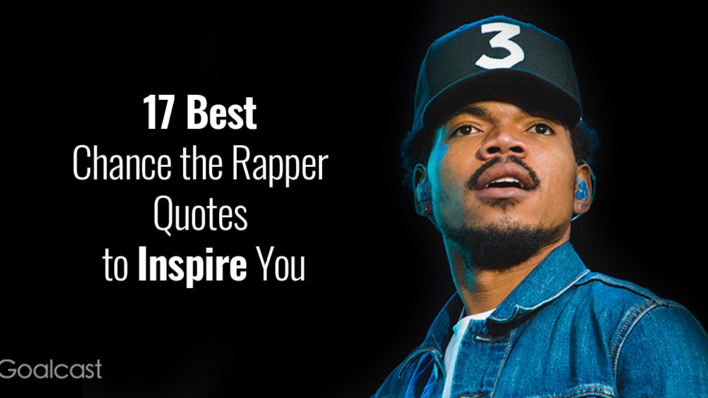 17 Best Chance the Rapper Quotes to Inspire You

Inspired by Kanye’s debut album, Chance began rapping in the sixth grade and slowly became one of the biggest breakout stars. And because he worked hard on his dream, Bennett not only had the chance to meet his idol, but also to collaborate with him.

While most artists want to link their stage name to a label, Chance decided that a wise choice would be to maintain his artistic independence. Things worked out for the best and he managed to achieve fame and success on his own terms.

As proof, his third mixtape dropped in 2016 – Coloring Book, earned him three Grammy Awards and became the first streaming-only album to win one.

The young rapper also has an interest in welfare and education and has actively fought to combat gun violence in his hometown.

Here are 17 best Chance the Rapper quotes and lyrics to inspire you: Something I try to instill in others is to just be a good person. It’s a decision you make a million times a day. But if you just keep trying, good stuff comes to you in an ordained way. I can’t gain anything off of anyone else not succeeding.

Everybody’s somebody’s everything. I know you right. Nobody’s nothing. That’s right.

Fame or perceived success – it all comes from group think.

The people’s champ must be everything the people can’t be.

Depending on the story that you’re telling, you can be relatable to everybody or nobody. I try and tell everybody’s story.

You gotta try and flip stuff. Everything you get, you can turn into something else.

Sometimes the truth don’t rhyme, sometime the lies get millions of views.

They don’t give nothing away. You gotta fight for your way.

When you make stuff from the ‘you’ point of view, you really can’t go wrong.

Clean up the streets so my daughter could have somewhere to play. We only know what we know until someone knows better.

What’s better than followers is actually falling in love.