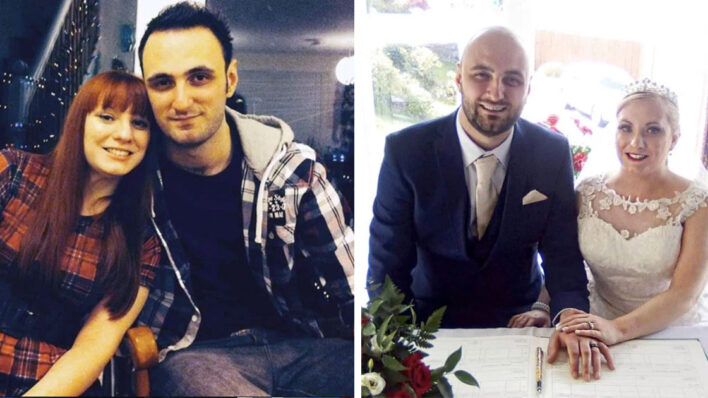 We never forget our first loves, even if decades go by before we see them again. The perfect example is
By Aly Walansky    June 28, 2019

We never forget our first loves, even if decades go by before we see them again.

The perfect example is Joanne and Adam Eden from Plymouth, in the UK met in primary school nearly twenty years ago and lost touch, only to find each other again at a school reunion!

Joanne “always had a crush” on Adam, but as happens, they went their separate ways and lost touch after going to different secondary schools.

At age 31, they both attended a reunion and met again!

“He was my favorite person to be around at school as he used to always make me laugh and help me with my work,” Joanne told UK’s The Sun. “Adam was the tallest in the class and I was the smallest, he is now 6ft 7in and I am 4 ft 11in.”

“We went our separate ways during our teenage years but there were a few occasions I had seen him in the park but hadn’t got the courage to approach him.

“I have always had a crush on him and I had him on social media, but it seemed when one of us was single, the other wasn’t which is annoying, but fate thankfully found its way.”

Joanne said when the two of them first saw each other after all those years, it was like no time had passed and they got along perfectly. It was “like they did all those years ago,” but at the time, Adam had a girlfriend, so Joanna couldn’t explore things further.

“There was a primary school reunion in 2013 which we both attended, and I remember we still got on like we did all those years ago,” she explained.

But Joanne thought that Adam had moved on: “He turned up with a girl who also went to our school and I must admit, I was pretty sad.”

She was unwilling to forget her love.

“Two months later, I saw on Facebook he had become single and I plucked up the courage to send him my number.

“It was the best decision I had ever made as he is my soul mate who has pushed me to achieve things, I never thought I could, like my degree in psychology.”

Adam and Joanne went from being innocent kids to maturing adults while they were apart, but still found that they fit together. “It is crazy to think that we were once learning our timetables together and now we have been together for six years.

“After a few months, I knew that we were destined to be together, he never fails to make me smile.

“When his mum, Val Faldo, 57, found out we were dating, she went digging for photos from year six leaving day and found quite a few of me.

“Adam couldn’t believe he had pictures of his now wife from as a kid – it is just evidence that we are meant to be.”

The couple is married and happier than ever. “Everything is just so easy with Adam, we never have any drama and if I am ever annoyed he makes me laugh and I forget what I was angry about,” Joanne shared.

Joanne and Adam are a great example to us all. If you have a great lost love (or even a friend) and you miss them, reach out and try to make a connection. There’s no telling what will happen!