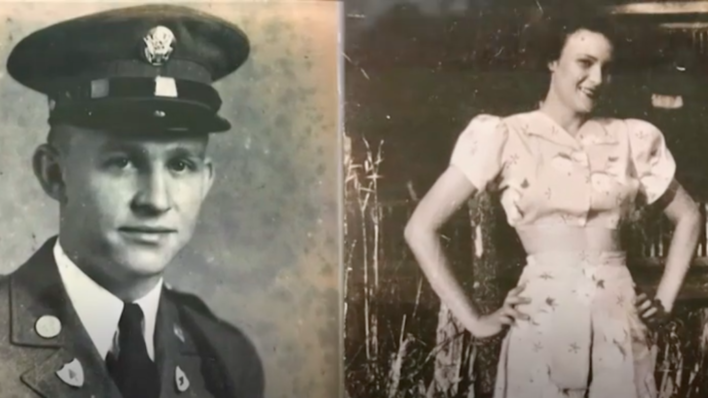 Separated During WWII, Their Love Lasted Until They Reunited 75 Years Later

The year was 1944 and 24-year-old American soldier KT Robbins was stationed in Briey, in eastern France, waiting to be
By Aly Walansky    June 12, 2019

The year was 1944 and 24-year-old American soldier KT Robbins was stationed in Briey, in eastern France, waiting to be shipped to the Eastern Front. That’s where he met and fell in love with an 18-year-old French girl named Jeannine Ganaye.

Their romance was immediate but short-lived. Within a few months, Robbins and his regiment had to leave Jeannine’s village and head to the Eastern Front, and the two were separated. They wondered when, and if they’d ever see each other again.

“When he left in the truck, I cried, of course,” Jeannine recalled. She even practiced English in the hope of better communicating with Robbins if he returned from the Front.

Instead, Robbins was shipped back to America after the war. In the next 75 years, both Robbins and Jeannine did get married to other people, but neither ever forgot their first love. Robbins even carried a precious photo of Jeanine in his pocket to remember her by.

Eventually, Robbins came to France for the commemorative ceremonies marking the 75th anniversary of the D-Day landings. He showed it to French journalists working on a story on veterans in the United States, saying that he would like to meet her family — assuming that she had passed.

Instead, he was greeted by a surprise. Seventy-five years later, the journalists had found his first love — and Jeannine was alive!

Robbins traveled to visit Jeannine, whose last name is now Pierson, in her retirement home.

“I always loved you. You never got out of my heart,” Robbins said to Pierson as he saw her again.

“He said he loves me. I understood that much,” Pierson said in French, laughing.

But married men can’t go looking for old flames! “You know, when you get married, after that, you can’t do it anymore,” said Robbins.

The pair are both now widowed and spent a few, precious hours together before Robbins left for Normandy.

They promised to meet again. “Jeannine, I love you, girl,” Robbins said with tears in his eyes. They held each other and exchanged sweet kisses as they said goodbye.

Their bond, which survived across an ocean, two families, and 75 years, proves the last power of love and memory. It’s never too late for first love.