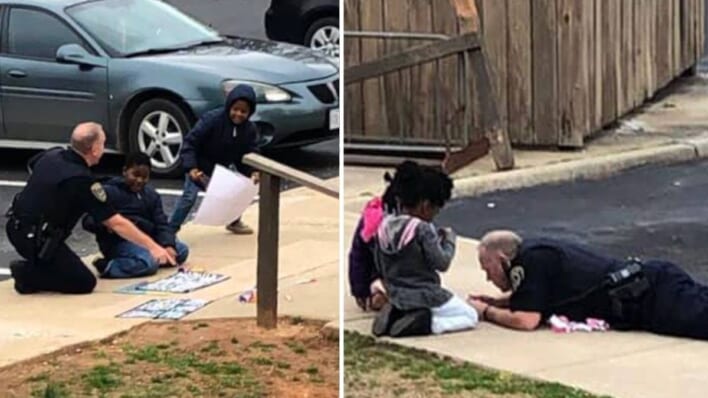 For Virginia-based Officer C. B. Fleming, his job is about community engagement and building bridges with the neighborhood he serves.
By Sophie Tolias    September 15, 2022

For Virginia-based Officer C. B. Fleming, his job is about community engagement and building bridges with the neighborhood he serves.

When we think of cops, we think of them making arrests, writing tickets and patrolling. In recent years, reputations have gotten worse. But one Virginia police officer working for South Hill Police is doing his part to mend wounds and build bridges. A touching moment of Officer C. B. Fleming went viral, highlighting his belief in the power of community engagement.

From False Alarm to a Cop-Kids Playdate

In South Hill, the local police received a call about a reported gas leak.

Officer C. B. Fleming arrived on the scene. Once the leak was deemed not a threat, Fleming wanted to make sure the children felt safe.

In a video posted on social media by one of the residents, Officer Fleming got down on the ground to play with the children.

In the video, he’s seen playing with two groups that were on the street – the girls playing with dolls and a group of kids coloring.

The residents said that it was more than just playing.

One of the residents, Iesha Roper, explained that kids in their neighborhood are afraid of cops. So having a cop approach them and interact with them in a friendly way helps them feel protected and seen. Roper added: “It’s just amazing the bond he has with the children.”

It’s no surprise that the officer is so good with children, he has four of his own and him and his wife have also fostered two children.

“My job is here to protect and serve,” Officer Fleming explained. “For me to be a catalyst to young people regardless of race, color, creed, religion, I feel like I can be a positive change… Remember I’m always here. Not just for the bad stuff, but for the good stuff, right?””

Now the Virginia Officer Is Known as a Superhero

Because of his dedication to their community, the residents call Officer Fleming “The South Hill Batman.”

And the South Hill Batman is dedicated to helping his community, even if that looks like playing with dolls on the street. If more and more people lived like Officer Fleming, we’re certain the world would be a much better place. Maybe we can push it in that direction. Keep going!