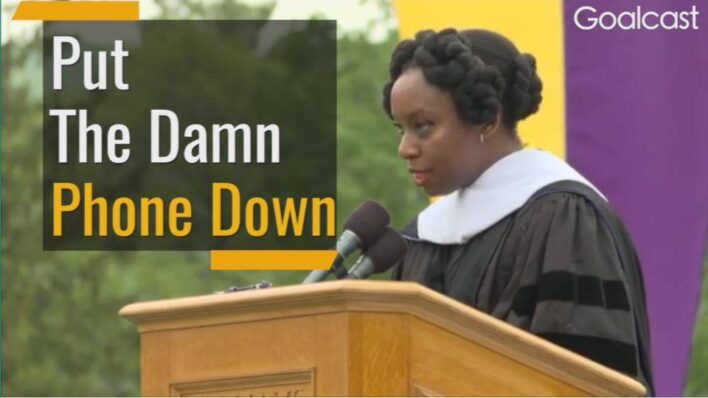 Chimamanda Ngozi Adichie points out the fact that too much social media is not healthy and that it has made us anti-social.

Put the damned phone down, well at least for a few hours a day. Read a book, talk to other human beings, and when you do pick up the phone again, before you Tweet, or Snapchat, or Instagram, call your parents, or call an aunt, or go outside and do something that you will not be photographing or video taping for social media. In the grand scheme of things, views and likes on social media really mean nothing. Okay that’s not true. They do mean something in the way that they represent a fleeting, but still enjoyable validation. Of course now in the age of something called social media influencers, they can be monetized.

It is not that being on social media doesn’t matter. It does matter. It does have its good uses, but the question is how much social media should matter. How much space social media should occupy in your life. Less than it did in college I would suggest. I would suggest too that you be very clear about the artifice that social media is, and that you try and have real connections with actual people that you actually know. Too much social media is like eating too much a moist, too sweet, too rich, too everything cake. You like it while you’re stuffing yourself, but afterwards you feel less than good, and you realize you would have been better off with a little less cake. I speak from experience by the way. Not with social media, but with cake.

What America will become is now in the hands of your generation. You cannot be complacent. You cannot afford to be complacent because democracy is always fragile. To keep a just society just has nothing to do with being on the political left or on the political right. It requires people who know that incompetence dressed up as strategy is still incompetence, and still unacceptable. It requires resilient and resistant people who believe in the true idea of America, and in the idea of truth, and in the idea of just laws, and who will constantly and consistently take a stand.