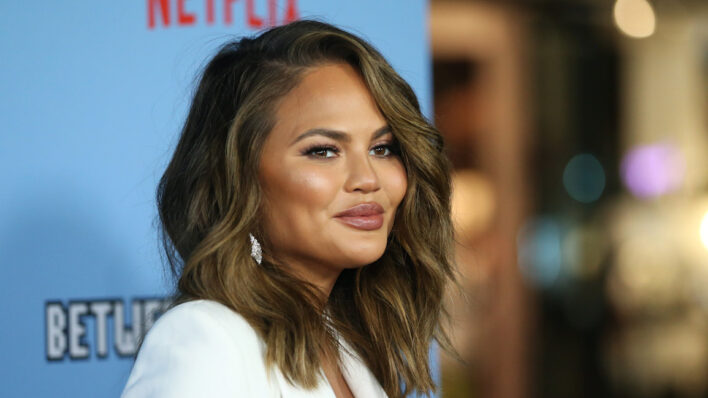 Chrissy Teigen may have had a tough year, but her outlook on motherhood remains as strong as ever. The mother-of-two recently took to Twitter to share her opinion on breastfeeding and clear out the misconceptions associated with it.
By Shaoni Das    December 3, 2020

Chrissy Teigen may have had a tough year, but her outlook on motherhood remains as strong as ever. The mother-of-two recently took to Twitter to share her opinion on breastfeeding and clear out the misconceptions associated with it.

Chrissy Teigen may have had a tough year, but her outlook on motherhood remains as strong as ever. The mother-of-two recently took to Twitter to share her opinion on breastfeeding and clear out the misconceptions associated with it.

Society places an enormous amount of pressure on mothers. Therefore, most mothers feel like they cannot live up to those ridiculous standards and can crumble under pressure, often to their child’s detriment.

One such expectation is that of breastfeeding. Breastfeeding is perceived as the most “natural” way to feed your children, but somehow it’s also considered “superior” to any other feeding method. Of course, breastfeeding had its unique benefits, but new mothers are made to feel like their body has failed them if they can’t breastfeed. It once again reinforces the false narrative that biology outweighs everything when it comes to conceiving, bearing, birthing, and raising children.

By being forthcoming with her experiences with breastfeeding, Chrissy Teigen offered a semblance of hope to all mothers who feel like they’re not good enough. Who feel like they’ve let their children down. Here’s what we can take away from Chrissy’s message:

Chrissy says she felt “shame” at not being able to breastfeed

On November 29, Chrissy wrote a thread of tweets describing her feelings on breastfeeding and how she struggled to provide milk for her young ones. She said that while it’s “wonderful” that breastfeeding is being celebrated and becoming increasingly normalized over society, the stigma around formula should also be removed. She explained that due to her depression, she had a hard time producing milk, making breastfeeding utterly challenging.

She also reminded her followers that many women were able to become mothers by surrogacy, or they might just have some other health issue that prevents smooth breastfeeding. In fact, Chrissy recalled how one time she was pumping hard on the highest mode of the machine, thinking her baby was not getting enough milk, that the stress actually took a toll on her. She ended up producing an ounce of milk and nothing else.

normalize breastfeeding is such a huge, wonderful thing. but I absolutely felt way more shame having to use formula because of lack of milk from depression and whatnot.

Up to 15% of women experience “disrupted lactation”

It’s estimated that 12 to 15 percent of women face “disrupted lactation.”  Meaning they are not able to provide an ideal amount of milk for their babies and might have to supplement their efforts with formula. And even that number doesn’t paint a full picture because it doesn’t account for various other factors outside of medical conditions. Perhaps the baby can’t latch or perhaps the mother has post-partum depression or a mental health issue. Perhaps the pump has its own set of problems.

At the end of the day, all that matters is that the kid is receiving nourishment. Whether it’s through the mother’s milk or formula, it doesn’t matter. As Chrissy said:

Normalize formula! your baby is gonna be BEAUTIFUL, PERFECT, AND OKAY […] I just remember the sadness I felt and want you to know you are doing it right if your baby is fed, mama.

Chrissy’s thread has a resounding message for all mamas, and her willingness to be vulnerable on the internet has far-reaching implications. There’s a reason why so many people, women and men alike, have been drawn to her Twitter persona — she’s able to deliver the truth with both frankness and compassion.

It’s unfortunate that so many mothers are known to shame others for not being able to breastfeed. It’s a process that’s largely out of one’s control, and no amount of medicine or praying can make that happen if it’s just not meant to be. Instead of carrying that guilt around and letting it drive up the anxiety and the stress, mothers should just make their lives easier and make use of products that have been precisely designed for this purpose.

Nobody has the right to dictate your approach to motherhood

Modern society, especially with the proliferation of social media “Momstagrams” and Mommy Blogs, has become a fighting pit for mothers. But what you have to remember is that the rules to motherhood have more or less been the same: as long as your baby is healthy and happy, you’re doing a good job. Nobody has the authority to change your stance on motherhood or tell you what’s right or wrong for your baby. You can take advice as needed but something as personal as breastfeeding shouldn’t be someone else’s talking point.

Chrissy Teigen’s message spells out why she’s become a relatable figure for everyone. She, as someone who’s always been forthcoming about her mothering moments, knows what it’s like to be judged for her actions. But instead of hiding and keeping her thoughts to herself, she decided to speak up and touch the heart of every struggling mother out there. The biggest gift that mothers can give to each other and themselves is to lead with compassion and kindness and make it a safe space for all types of mothers. And Chrissy has done just that through her message.