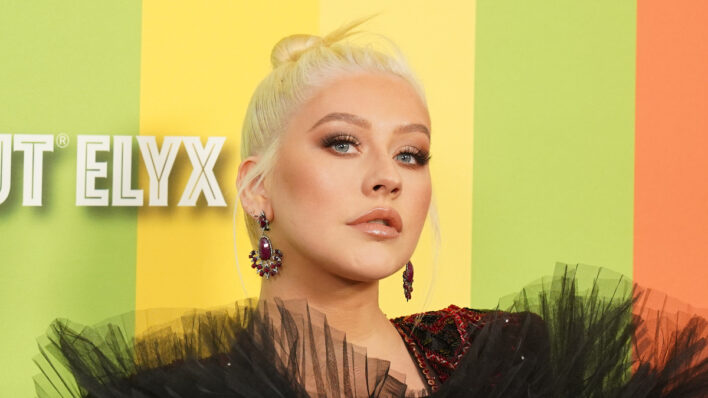 The 40-year-old opens up about her body changes over the years and why she never stopped “protecting herself” from her haters.
By Shaoni Das    December 17, 2021

The 40-year-old opens up about her body changes over the years and why she never stopped “protecting herself” from her haters.

Christina Aguilera is a legend in every sense of the word.

She was among a wave of extraordinary female artists in the 2000s who dominated the zeitgeist with their striking vocals, theatrical performances, and their exploration of bold, unconventional themes, such as sexuality, body image, and misogyny. Their impact on our culture is irrevocable, with so many contemporary singers citing them as major influences in terms of visual artistry, songwriting, activism, and vocal mastery. Simply put, Christina Aguilera deserves all the acclaim in the world for the work she did in her field, laying the groundwork for discernible progress in how women can assert agency in their respective arenas and reclaim the narrative.

However, the media always has a way of badgering the most powerful of women, no matter their social status or legacy. In Christina’s case, they attacked her relentlessly for gaining weight a few years ago. Body shaming, or fatphobia, in particular, is a rampant issue in every community, but only when a female celebrity is bombarded with criticism do people actually remember how horrific and consequential it actually is.

Christina hated being “super skinny” in her twenties, and felt “insecure” every day

As a young artist navigating through what can be a vile, treacherous space, Christina Aguilera had initially struggled to hold her ground against her nay-sayers.

This didn’t just include the voracious press, who’ve always ragged on her for something or other, but also internal members on her team, record executives, and label representatives. They sought to control her image to the tee, orchestrating her each and every appearance based on what they thought would maximize sales. The industry encouraged her to maintain a specific figure, one with broad appeal and an aspirational quality — something everyone could envy but never achieve themselves— but Christina always “hated being super skinny.”

Over time, she started “filling out” a bit more and started appreciating her curves for what they were. “I have a hard time looking at the early pictures of myself because I remember feeling so insecure,” she told Health magazine. She had put herself through hell to attain the “skinny” shape, yet it took nothing but a few unflattering photos to turn the masses against her. Around 2011, when Christina was busy promoting the first season of The Voice, everyone ripped into her for her weight gain. How can someone who established her identity as a “skinny white girl” dare to swindle the audience by becoming fat?

I would never want to relive my 20s — you’re so in your own head and finding your confidence. As you age, you stop comparing yourself to other people and start appreciating your own body and owning it,

Thankfully, at the peak of the vitriol, Xtina seemed largely unperturbed by the conversation and made it a point to focus only on her loved ones and her career — not what strangers were saying about her. In a Television Critics Association interview, she asserted that she “loved” her body and that her boyfriend loved her body. “As long as I am happy in my own skin, that is all that is all the confirmation I need,” she said. She noted how women are always under a microscope anyway, so if you were to obsess over every negative comment, there wouldn’t be an end to the madness.

Age does heal many anxieties. As Christina accrued more meaningful life experiences, such as motherhood and marriage, she was able to gain a fresh perspective on what it really means to accept yourself, regardless of the slander that’s being hurled your way. What’s upsetting is that people don’t bother to consider other factors when investigating someone’s body. Christina went through a pregnancy in the early 2010s and likely faced health struggles as a result; weight gain was probably the least of her concern.

Let us allow ourselves to be what we are. I have often clashed with my anxieties and with being hypercritical towards myself, but I have never stopped looking for new ways to push myself further, without neglecting to protect myself.

And, of course, as you’re getting older, you have no choice but to embrace your body. You realize your youth won’t last forever and that you are far more vulnerable to biological changes. It’s just fundamentally more challenging to keep your skin taut, physique slender, and complexion ever-glowing as you go through the years. Nature forces your hand and enables you to appreciate, or at the very least, adjust to your body as it evolves. It doesn’t mean you’re always to be brimming with confidence. Christina said, “I think we all have our good days and our bad days in how we feel about ourselves,” but in general, she stopped comparing herself to other women and just started owning her external metamorphosis.

She also told  L’Officiel Italia she won’t be going on a diet or intense workout regimen anytime soon; instead, from her perspective, beauty is the “ability to know yourself” and “project what you are in an unmistakable light.” She said she might not be pretty, “far from perfect,” but at least she is “pure.” That’s the only thing that matters when people are imposing their unsolicited judgment on you: you have to look within and figure out how you can be authentic to yourself amidst the “noise.”

The mother-of-two admitted she has often “clashed with [her] anxieties,” but at the end of the day, she has to set an example for her young son and daughter. Being “hypercritical” does no favors for your mental or physical health, so it’s essential to exercise self-love every step of the way, whether you’re eating ice cream or running on the treadmill.

Be kind to yourself

The trajectory to reach Christina’s level of self-acceptance isn’t always seamless, but once you do, your life will be the better for it. It doesn’t mean you should torment yourself for every insecurity or doubt – everyone will have their moments, after all — but that it’s entirely natural for your body to transform. The world won’t end if you gain a few pounds, and if this still continues to plague you, you have the power within you to lose the same pounds, too. Weight loss isn’t a straight line; there are ups, downs, and endless stretches where nothing shifts in the least. The key is to maintain confidence in yourself and just be kind to yourself and your journey. The rest will work itself out.

Self-love Starts With Acceptance
“Love yourself first and everything else falls into line. You really have to love yourself to get anything done in this world.” —Lucille Ball
Tags
Share
← Prev Post Next Post →