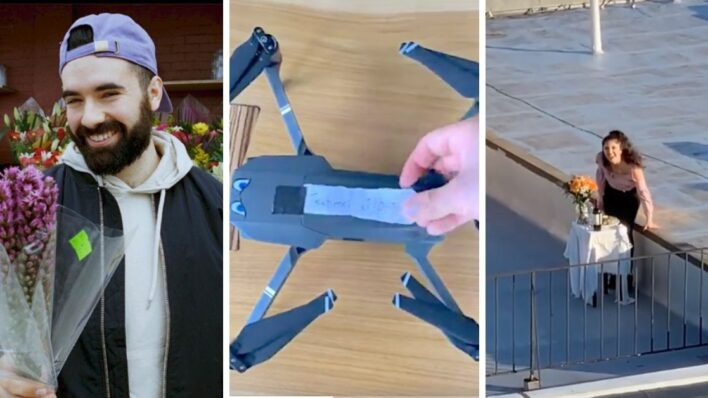 In coronavirus time, where social distancing is now the norm, Jeremy Cohen found a way to ask a girl out. How did he do it? By sending her his phone number with the help of his drone camera.
By Aly Walansky    March 24, 2020

In coronavirus time, where social distancing is now the norm, Jeremy Cohen found a way to ask a girl out. How did he do it? By sending her his phone number with the help of his drone camera.

Most of us, and those who can, are self-isolating right now. If you are with your significant other, you’re one of the lucky ones. Others who are single may have to remain so for a while, until it is safer to go out again.

As businesses are closing, people are losing their jobs and people are confined to the indoors, dating just got a lot harder.

Unless you are creative, of course.

They noticed each other from a distance

But one forward-thinking Brooklyn-based photographer had an idea. In social distancing mode, Jeremy Cohen, 28, was in his apartment when he noticed a girl dancing on her rooftop.

I thought she was really cute from far away. During this quarantine, I think everyone is fending for social interaction. I was like, ‘Oh my god, a girl. I haven’t seen one for so long.’

In true Romeo fashion, he used his own balcony and modern technology to get her attention. This is how he did it.

He decided to get her attention…

The two weren’t standing close enough together to talk (social distancing, you guys!). So he took his number and put it on a piece of paper, taped it to his drone and flew it toward the brunette.

And, he captured the whole moment on a TikTok video that now has 4.4 million views on Twitter.

I can’t believe this actually worked, and yes this is a true story.

Despite being shy, he is a hopeless romantic

Cohen shared he’s normally not that outgoing, or a great flirter. But he considers himself to be a hopeless romantic.

“2020 has been off to a terrible start, but I still needed to shoot my shot. She picked up my drone and I guess it worked,” he says in the video.

The girl in the video, 28-year-old Tori Cignarella, texted him that night. According to Cohen, they have been texting regularly since.

I have asked her out on a date, but we have to figure out what it will be. I have an idea but I can’t say it yet. It’s not going to be in-person.

Jeremy ended up finding not one, but two creative ways to have a date in the middle of a quarantine. The two had a nice dinner over videochat, while seeing each other from a distance. In the second date, Jeremy went all out and walked in a protective bubble so they could take a stroll through the city.

Jeremy also wants people to contribute to initiatives like Help Main Street, which is a way to buy gift cards for small businesses, and Feeding America, a food bank organization. In this time of need, more people than ever will need our help, so Jeremy made sure to highlight that.