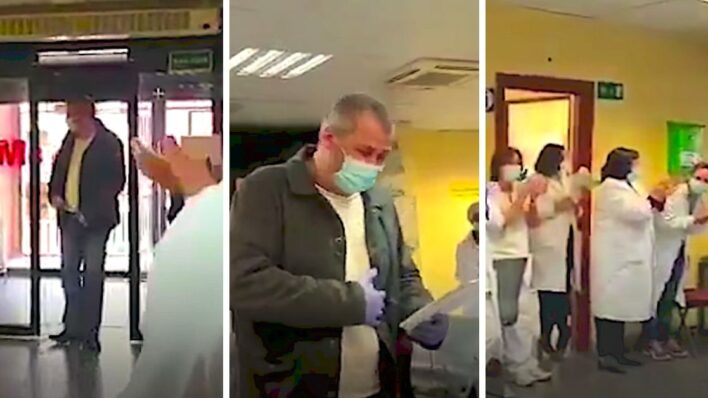 A Spanish taxi driver who has been giving people free rides during the coronavirus pandemic has been brought to tears with this surprise.
By Aly Walansky    April 24, 2020

A Spanish taxi driver who has been giving people free rides during the coronavirus pandemic has been brought to tears with this surprise.

As a life-threatening virus is passing around, it’s become the norm for people to distance themselves from others out of fear of catching what others may have.

But this was also an opportunity for humanity to rise to the occasion. While the undoubtable heroes of this coronavirus pandemic are our healthcare workers, doctors and nurses, there are other who have rose to the occasion with their selflessness.

This is the case of one Spanish taxi driver, who has been giving coronavirus patients free rides to a local hospital, despite the risks of exposure.

The Spanish taxi union shared a video to Twitter over the weekend with the tag #ElTaxiUnido, showing the man at the hospital after just being tested for COVID-19.

As Spain suffers, he stood up in a major way

As Spain battles with the virus, much like Italy, this taxi driver decided to do what he could in the fight. He and other drivers have been giving free rides to at least 75,000 people going to 300 medical centers during Spain’s first month under lockdown, Yahoo News reported.

During the pandemic, all taxis are being thoroughly sanitized after every passenger ride, the Spanish Taxi Union wrote on Twitter.

He got tested but never expected the results…

The driver had been tested for the virus prior to arriving to the hospital. And he had no idea he would get a surprise, which shows the extent of his selflessness–he has been offering his services without expecting any reward or recognition.

The doctors and staff at the hospital didn’t want his efforts to go unnoticed. So they planned a surprise for him. They called him, asking to pick up a patient.

When he got there, he received a check and the result of his COVID-19 test, which came back negative, and a standing ovation.

The union wrote that the emotional driver couldn’t stop crying because of the surprise, as the staff surrounded him with applause.

Everyday heroes rise during the pandemic

Whether it is the healthcare workers or factory employees, it is undeniable that this current global situation, as frightening as it is, has brought out the best in humanity. This taxi driver and the million others who have been helping in the best way they can are the unsung heroes the world needs right now.

Let’s make sure we don’t forget them and follow their lead.