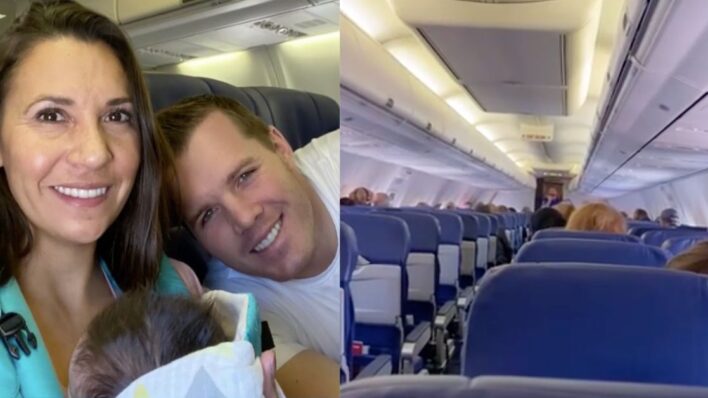 Dustin and Caren Moore were flying back home with their new adopted daughter when the passengers on the plane threw them a surprise baby shower.
By Aly Walansky    February 18, 2020

Dustin and Caren Moore were flying back home with their new adopted daughter when the passengers on the plane threw them a surprise baby shower.

New parents Dustin and Caren Moore were flying home to California with their newly adopted newborn daughter and they had tons to be grateful. But they were about to find even more cause to celebrate, in the form of an impromptu baby shower thrown for them by no other than their fellow passengers on the plane!

Dustin and Caren Moore were on a Southwest Airlines flight when they were floored by the kindness and generosity of fellow passengers, as they shared on Twitter.

They had been struggling to have a child

“It’s been a difficult week. But, rather than publicly air my grievances, I’d like to share w/ you the kindness strangers offered us the day we brought our daughter home,” Dustin wrote.

I hope our story uplifts you, and reminds you there is goodness to be had in this world.

On Nov. 8, 2019, the Moores were en route from Colorado to California. They were “parents who after 9 years of trying had been blessed with their first child. Parents who felt scared, but determined in their new role.”

It only took one passenger to start it all

During the flight, their new baby daughter needed a diaper change, and Dustin said a flight attendant cleared a space for them and gave them some privacy.

“After a change, Jenny (the flight attendant) and another passenger complimented my beautiful daughter and politely asked what had prompted a flight with such a young infant. I gave them the shortened adoption story, to which they hastily offered congratulations, and shared a few more kind remarks,” he wrote.

“Then, we heard the intercom,” he wrote.

The attendant Bobby came on and announced a special guest on the flight. Our daughter. ‘She’s just been adopted by her parents Caren and Dustin, and is making her way home.’

They celebrated in the best way they could

At that point, the whole cabin broke into applause. Then something beautiful happened; the flight attendants passed out napkins and fellow passengers shared their words of wisdom for the nervous new parents.

“I really like the one that says get sleep when the baby sleeps. Whenever my daughter goes down for a nap, we try to catch up on any sleep we missed,” Dustin shared.

However, even more special piece of advice came from someone who had been adopted too!

On one of the last ones, a person had written down they were adopted 64 years ago and ‘Us adopted kids need extra love.’

They will never forget this surprise

Dustin and Caren will most likely never forget this impromptu baby shower. Indeed, they gathered all the notes and created a scrapbook that will be an incredible gift to their new daughter.

Furthermore, this touching is a reminder that good always comes back to you. Dustin and Caren’s struggles to have a baby not only ended up on a positive note, but also in a memorable commemoration of the event. By adopting, they have offered a new life to an unfortunate child.