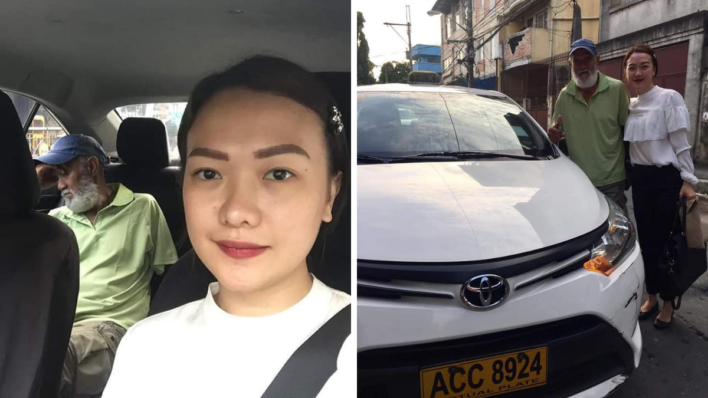 An exhausted driver got the surprise of his life when he refused to take a client.
By Sophie Babinski    December 27, 2021

An exhausted driver got the surprise of his life when he refused to take a client.

Sometimes making a living is hard and can be extremely tiring. Throughout the pandemic, everyone has gotten a little taste of exhaustion, whether emotional or physical. One Filipino woman saw firsthand the toll being overworked takes on someone, and she decided to do something about it.

Cristina Tan, a young professional, was on her way home and looking for a lift, trying to hail a cab. When she finally hailed the cab and tracked it down, she saw that the driver was very elderly and looked quite tired. When she asked the cabbie if he could give her a lift home, he answered that he wasn’t able to, as he was too tired and was not able to drive properly. Cristina was concerned and desperate for a way to get home – so she made him an offer.

Cristina offered to drive herself home in the man’s taxi while the man took a nap in the car. At first, the elderly man was concerned about Cristina, mistakenly assuming that she was not able to drive a car with a manual transmission. Cristina ended up behind the wheel, and the taxi driver immediately fell asleep. A few potential passengers tried to flag down the cab, and they were tickled when they realized the driver was a woman taking herself home!

Cristina was not frustrated when the driver couldn’t take her home- she showed empathy instead. She talked with the driver, who she found out was 70 years old and had been driving taxis since the 1960s. He was working into old age to take care of his family. Many people would benefit from showing the same type of empathy Cristina did and finding solutions that work for everybody instead of simply getting frustrated.

Lead with empathy
“It’s the hardest thing in the world to go on being aware of someone else’s pain.”- Pat Barker
Tags
Share
← Prev Post Next Post →