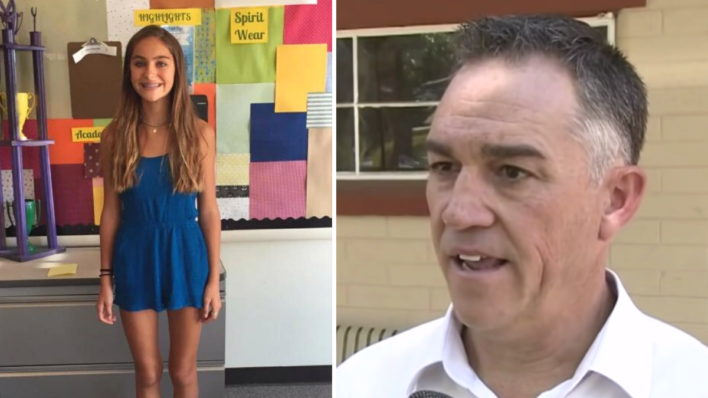 When Fischer Middle School in California asked a 13-year-old girl to go and change her “inappropriate” outfit, one angry dad stepped in.
By Bryan Liquor    June 22, 2022

When Fischer Middle School in California asked a 13-year-old girl to go and change her “inappropriate” outfit, one angry dad stepped in.

Every parent’s heart stops and mind races when they get a call from their children’s school. Were they bullied? Got into a fight? Or, something worse?

When Tony Alarcon got a call from Fischer Middle School in California, it thankfully was none of the above. Yet, it was still a shocker.

His 13-year-old daughter Demetra was in trouble, just not in the way a parent would expect. It turns out that she wore a blue romper to school when a teacher took her aside and told her it was too short.

“I was told the shorts weren’t appropriate,” Mr. Alarcon told KTVU. “I had to go back into the car, where I luckily had a pair of leggings as a backup.”

However, it wouldn’t be long before this papa bear got fired up, and it would spark national attention.

How a Father’s Outrage Inspired a Personal Mission

The patriarch told CBS San Francisco that he was mad, not at his daughter, but at her school.

“I mean, today it’s 90 degrees outside and she’s wearing leggings because she doesn’t want to be dress-coded for wearing shorts,” he vented. “And it’s not OK. It needs to change.”

And so, he used this as motivation to protest the school’s dress code, which he says unfairly targets girls.

He said that his daughter isn’t alone either, adding, “I’ve heard from multiple girls that they just want to be comfortable, but they feel like they’re being pushed into wearing leggings in 100-degree heat.”

He added that teenage girls like his already have enough on their plates.

We have to have dress codes that are fair and reasonable and don’t cause them emotional issues, cause them to question their bodies, or feel like they’re sex symbols at 13-years-old. Because they’re not. They’re just kids.

How One Father’s Actions Received an Outpour of Support

In a prepared statement, school superintendent Diana G. Abbati stated that “Students are expected to wear clothes that are suitable for the school activities in which they participate.”

Meanwhile, while some commenters sided with the school, many rallied behind Alarcon.

One called out a double standard, posting, “Yet they’re allowed to wear a cheerleader outfit such as that to school! Give me a break!”

Your post has reminded me of some fairly serious body image issues of my own that have stemmed from our cultural shaming and sexualizing of girls bodies.

“They singled her out because she was accused of distracting the boys in class. She can not be responsible nor control the thoughts of others let alone her own. I agree with him. This was ridiculous,” wrote another.

How One Father Proved the Importance of Speaking Up

Alarcon added that he and his wife actually have a system in place to check whether their children’s clothes are appropriate, ‘and that’s that they cover their ‘front and rear’ in ‘any position — sitting or touching toes.’

He added that his mission is bigger than just his young daughter.

You have to stand up for what’s right and that’s what I’m doing.

Wherever you fall in this debate, you have to give it up for a father whose unconditional love and support for his daughter — and those like her — has him taking a stand and risking the smoke that comes with it.

Raising a teenage girl isn’t easy, but a supportive dad can improve the chances of success.