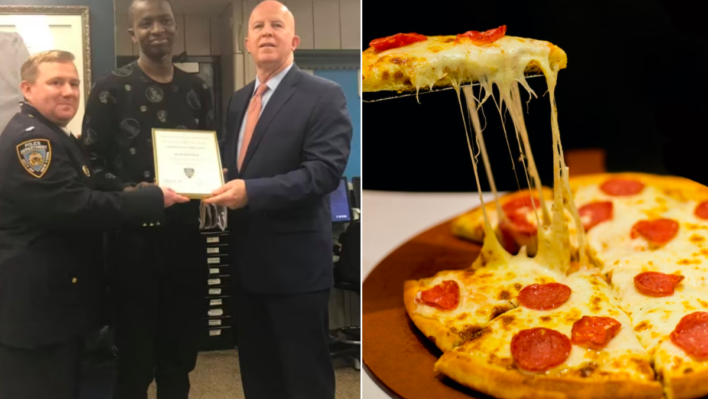 The pizza-wielding vigilante not only delivered the robber but he also managed to honor Domino’s 30-minute delivery guarantee while doing it.
By Heidi Hamm    January 18, 2023

The pizza-wielding vigilante not only delivered the robber but he also managed to honor Domino’s 30-minute delivery guarantee while doing it.

21-year-old Domino’s employee Alou Bathily was on a routine pizza delivery in Manhattan when he found himself in the middle of a police chase.

A team of NYPD officers was in hot pursuit of a suspect when Alou kicked his bike into high gear to give them a helping hand.

According to an NYPD 20th Precinct Facebook post, the police officers had been on an hour-long hunt for six perpetrators who had attacked a woman and stolen her AirPods.

They had almost given up when they spotted one of the suspects, 17-year-old Lovell Ambrister. Ignoring the officers’ shouts to stop, Lovell ran across West 72nd Street, dropping $50 counterfeit bills like hotcakes. Alou, realizing what was going down, didn’t hesitate.

Yelling, “I’ll stop him, officers!” Alou peddled ahead of the fleeing fugitive, blocking his path. But he didn’t stop there.

Like the superhero that he is, Alou then leaped off of his bike, tackled Lovell to the ground, and sat on him until the police officers had a chance to catch up. Sgt. Rivera and Officers Jack Etter, Delilah Solis, Darnell Jones, and Bridget Fanning took over from there, “apprehending the suspect in a safe manner.”

It turns out that not only did Lovell steal the woman’s Apple AirPods, but he was also guilty of using counterfeit cash at two stores, where he made small purchases to get real cash as change.

Lovell, who has had seven prior arrests for various crimes, was charged with robbery, forgery, petit larceny, and trademark counterfeiting. And while his arrest is good news, the best part of the story is that Alou’s crime-stopping escapade didn’t stop him from honoring his employer’s 30-minute delivery guarantee. Somehow he still managed to make his delivery on time.

Alou, originally from Mali in West Africa, had only been in the United States for two months when the incident occurred. He came to the U.S. to learn English so he could pursue his dream of becoming a businessman in Mali.

NYPD Recognizes Driver For His Bravery

New York mayor Bill de Blasio praised Alou for his actions, giving him a shout-out on Twitter where he cheekily wrote:

“At last! A reason for New Yorkers to consider Domino’s. Kudos to the pizza delivery hero who helped New York’s Finest stop this robbery (in 30 minutes or less).”

Alou also received an award for his bravery from the NYPD and was given the title “honorary local neighborhood superhero.”

As for Alou, he told ABC7 News that he would do it again. “It’s good for the community because if I’m going to help the policemen in their work, it’s good because the police are here for the security.”

While no one should go out looking to serve up their own slice of justice, this incident does highlight the importance of being aware of one’s surroundings and the role that everyday citizens can play in preventing crime. Alou’s actions serve as a reminder that anyone can make a difference and help keep their community safe.

Heidi Hamm is an experienced freelance lifestyle writer based in Canada. She has been featured in various publications including the Huffington Post, Love What Matters, Today, and others. When she is not writing, she’s drinking way too much coffee.