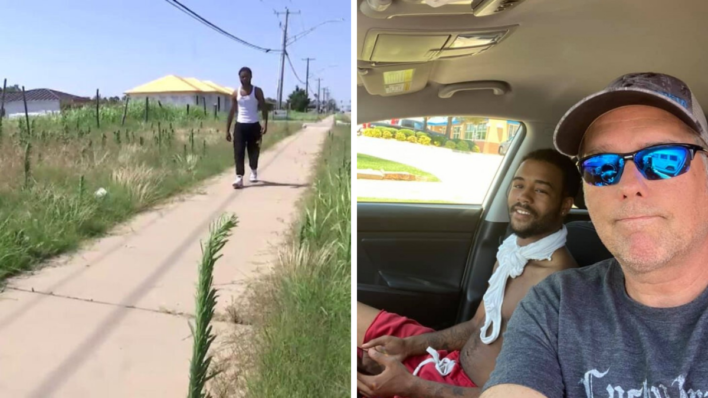 Man Walks 17 Miles A Day To Provide For His Family, Stranger Surprises Him With $52K

While driving one day, a man saw someone walking along the highway in scorching heat so he stopped to ask
By Joel Balsam    June 30, 2021

While driving one day, a man saw someone walking along the highway in scorching heat so he stopped to ask why. It turned out the man was walking over 8 miles to and from work to earn money for his family, so the stranger picked him up and helped fundraise more than $52,000.

He walks 17 miles to work to feed his family

Every day, Donte Franklin sets off to work at a Buffalo Wild Wings to earn money for his family. On the way there, he walks 8.6 miles over more than 2 and a half hours. Then, he starts his shift and when he’s finished he has to walk all the way back home.

“I really don’t care if it gets tiring. I just have to keep pushing,” he told the Fox News affiliate in Oklahoma. “I walk just to make my family proud.”

“I haven’t missed a shift at all,” he added.

An encounter with a stranger was a blessing

But one day on Franklin’s way to work, a man stopped to see if he needed a lift. The driver, Michael Lynn, had seen Franklin twice while out running an errand and the hard-working walker agreed to the ride.

“I wasn’t expecting it, but really it was a true blessing he gave me a ride,” Franklin told Fox.

In the car, the two got to chatting. Franklin revealed that his mother died of Hepatitis C when he was just 16 and things have been rough ever since.

“After she passed away it’s just been hard for me,” he said.

Lynn asked if Franklin had money for food. He didn’t, so Lynn gave him $20 and dropped the Franklin off at work.

A community came out to support him

“Friends I gotta share this with you!!! … I just want to wish him well!! May God bless him and I hope his days get better for him!”

Lynn followed up his post by making a GoFundMe campaign to help Franklin get back on his feet.

“I can really help my family with this,” Franklin told Fox. “It’s just a really good blessing.”

Lynn said he hopes his good deed influences others to help if they can.

“If it can make just one person go help someone else that’s all that matters,” said Lynn.

Don’t wait to help others

In America, the answer to not having money is often ‘get a job.’ But that’s exactly what Franklin did and yet he’s still not able to feed his family.

Clearly, wages need to go up so someone like Franklin isn’t in that position, but until that happens it’s wonderful to see individuals stepping in to help their neighbors. We could certainly use more of that in this country and in this world.