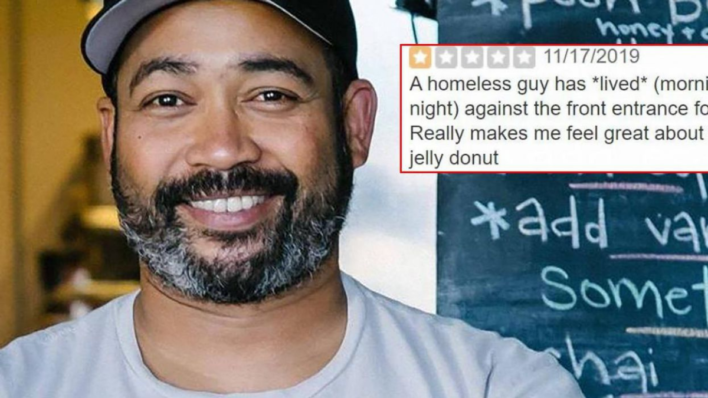 Small businesses can live and die by online reviews. So when Nomad Donuts in San Diego was on the receiving
By Joel Balsam    August 13, 2021

Small businesses can live and die by online reviews. So when Nomad Donuts in San Diego was on the receiving end of a one-star Google review due to the houseless man living out front of the shop, its owner could have forced its neighbor out. Instead, the owner responded with compassion, and his response probably earned him a lot more business.

In the subreddit r/MurderedByWords, user beerbellybegone shared a powerful and thought-provoking exchange from the review section of a San Diego business called Nomad Donuts.

In the one-star review, the customer wrote: “A homeless guy has *lived* (morning noon and night) against the front entrance for about a year. Really makes me feel great about spending $5 on a jelly donut.”

Man who lives outside shop an asset

Owner Brad Keiller had a couple of options here. He could ignore the negative comment, listen to it and kick the homeless man out, or respond. He chose the latter, and had a lot to say about the homeless man that lives outside his shop.

“Thanks for coming into the shop,” Keiller wrote, as reported by Upworthy. “We’ve appreciated your support over the years, even at the original one on 30th St! I’m sorry that Ray ruined your experience on your last visit. Know that he would like you to continue buying $4 donuts from Nomad every day and doesn’t want you to feel guilty about it.”

Keiller continued to explain that Ray isn’t just an unwelcome guest, but an asset to the store.

“Our ‘new’ location on University has a lot more homeless people than the original on 30th St and it had really been an issue until Ray started hanging out outside the shop,” Keiller wrote. “He keeps the problematic ones away. Yes we’ve had many of those on meth, heroin, and such that I’ve had to almost forcibly remove from the shop but Ray keeps them away.”

The owner said he likes him

Keiller also revealed that not only does he tolerate Ray, he likes him.

“Ray is a former computer programmer with some physical and psychological challenges but he is very intelligent and respectful. I speak with him almost every day. I like him. He is part of our community. The outside of the building provides him shelter from the sun, rain, and the building slabs give warmth at night.”

Keiller concludes by saying that he has no plans to remove Ray, and if he loses business because of him then so be it.

“I understand how you feel, it’s not easy to look at. I know I probably lose some business, probably yours too, because of my choice not to chase him away but I won’t. He’s not looking for handouts and he tried not to other anyone.

“If you stop and talk with him maybe you’ll come to like him too.”

In the comments, Keiller was praised for his response.

“The business owner is clearly socially conscious. That’s great and I’d support that. But it seems to me that the hero of the piece is actually Ray. He needs more love than the business,” one user wrote.

“Every inch of respect for this post is deserved. Ray’s a human, with a story, same as everyone,” said another.

Show compassion for all our neighbors

While some customers might feel uncomfortable seeing homeless people outside a shop, you know what, the houseless person is probably uncomfortable, too. They are humans with feelings, a past and a future, who have likely been through more than we could possibly imagine.

Most of us could never stomach what a houseless person has to go through on a daily basis. The least we can do is show them respect and compassion within a system that ultimately leaves people with physical and psychological problems like Ray at the fringes.

Keiller certainly deserves praise, but more than that, his response is a reminder that more needs to be done as a society to help our houseless neighbors.