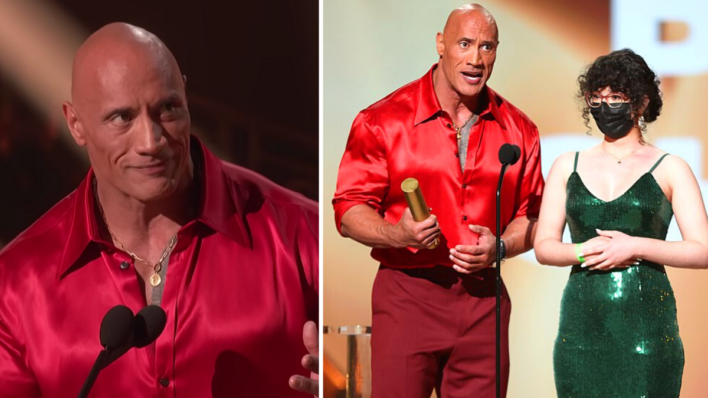 With the entire world watching, the Rock showed everyone who the true People’s Champion is.
By Bryan Liquor    July 26, 2022

With the entire world watching, the Rock showed everyone who the true People’s Champion is.

From legendary wrestler to larger-than-life actor, Dwayne ‘The Rock’ Johnson is no stranger to success while performing on a large stage.

So when he was recently honored at the People’s Choice Awards, the ‘People’s Champ’ was in his element.

Surprise presenter Jeff Bezos heaped Johnson with praise. “The thing that really stands out the most? He’s kind… You see, kindness is a choice. And what I admire most in Dwayne is his choice to show unwavering kindness to everyone around him,” he said.

Yet, moments later, Bezos and the world would find out just how deep Johnson’s kindness went.

Johnson also spoke about how important his work for the Make-A-Wish Foundation is to him, calling it a ‘privilege and an honor.’

With its mission statement to “Create life-changing wishes for children with critical illnesses,” the foundation states that more than moments, they wish to give kids courage and their parents hope.

It turns out that one of those kids, a survivor, was in the crowd, and she was about to get the shock of a lifetime.

“There’s somebody here tonight from Make-A-Wish,” said Johnson. “Being here tonight with you guys, that was her wish.”

Her name is Shushanna and, to a standing ovation, the Rock invited her on stage.

“I met her earlier. I told her how inspired I was by her story. She is a survivor,” he said.

She has fought literally for her life. She has inspired her family, her friends, now you guys here, now the world that is watching.

“I want to tell you how much you’ve inspired me and everyone around you, and I want to give you this,” said Johnson, as he handed his award to Shushanna.

A shocked Shushanna must have thought she was in a dream. “This is crazy. Thank you so much to you and to Make-a-Wish in general, I never expected something this crazy could happen,” she said. You can bet that this was one moment that neither her nor her parents will soon forget.

To close out that magical moment, Johnson left the crowd with one of his favorite quotes. “It’s nice to be important, but it’s more important to be nice,” he said.

RELATED: Dwayne ‘The Rock’ Johnson Helps Morbidly Obese Woman Lose 115 Pounds Without Ever Having Met Her

It’s easy to assume by his wealth and fame that the Rock is all about image and status. Yet, by saluting a brave girl who beat the odds, he showed that real success lies in creating happiness.

Lucky for us all, you don’t need millions to lavish others with kindness, just a little motivation.

make people happy
“Service to others is the rent you pay for the room you have here on Earth.” – Mohammed Ali
Tags
Share
← Prev Post Next Post →