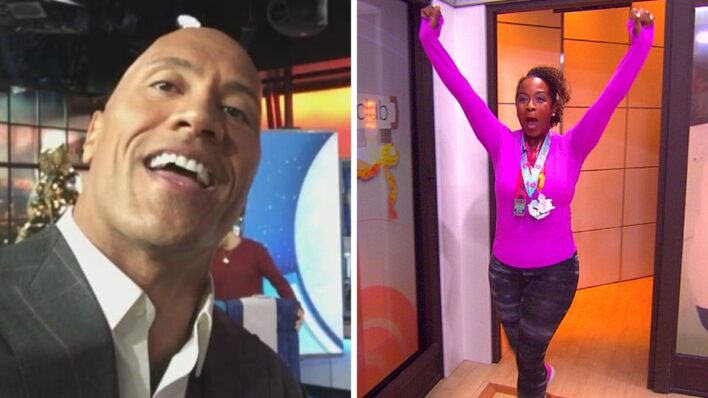 One of the Rock’s biggest fans found the strength and motivation to achieve her goals with the help of the star himself.
By Bryan Liquor    November 4, 2021

One of the Rock’s biggest fans found the strength and motivation to achieve her goals with the help of the star himself.

It was a sobering trip to the doctor for Nina Gibson. Tipping the scale at 280 pounds, the 48-year old resident of Hawthorne, California, was morbidly obese and was told she would have to take immediate action or face the worst.

Gibson didn’t need a scale to remind her of the danger: Her mother, who passed away at 49, was a fried food fiend with a sweet tooth for doughnuts. Knowing that it was literally do-or-die, Gibson made a mad dash to the gym.

However, she told TODAY that the going was tough. “When I was in the gym it was really hard for me to do the strength training,” she said. Gibson was also insecure, convinced that everyone was staring at her because of her weight.

However, despite the slow start, Gibson shook it off, got out of her head, put her blinders on and got to work.

As it turns out, she wouldn’t be going at it alone.

While we know the Rock as a star now, his career didn’t start that way. He’s famously shared his ‘7 bucks moment,’ talking about returning to Florida with a shattered football career and only $7 to his name.

In one video, he described his turning point in his life being like a switch was flipped on. “The world was going to hear from me,” he decided. “I didn’t know how and when, but I started training again.”

Gibson said that watching his motivational videos gave her the fuel to push forward.

“The Rock would definitely motivate me,” she said.

Just like everything the Rock’s touched, success followed – big time.

Gibson shed 115 pounds, trimming down from size 26 to size 8, now sitting at a slender 165lbs. She’s also proudly hooked on to running and participates in 1 to 2 races a month.

However, the best was yet to come for Gibson.

When the Rock heard about her incredible weight loss story – and his role in motivating her – he sent her a special message.

I just heard the great news that you lost over 100 lbs. Congratulations! I’m so happy for you, I’m proud of you. That’s so awesome. […] I heard in some way I helped motivate that. I appreciate that, thank you, and keep up the great work.

With a new body, Gibson has a new lease on life and new possibilities. However when it comes to food, she has cut out a few.

“I went from too much fast food and ice cream all the time to eating stuff like salmon and spinach,” Gibson said. “And I love spinach!”

Taking massive action change like weight loss can be inspired by many things: Becoming a better mom, a revenge bod, or in Gibson’s case, having a longer life.

While it does take digging deep inside for that extra dose of motivation, it’s also about looking to others – like the Rock – to show you what’s possible.

So use all your resources to achieve your dreams – you never know who might be watching.

You can achieve anything you set your mind to
“If something stands between you and your success – move it. Never be denied.” – Dwayne Johnson
Tags
Share
← Prev Post Next Post →