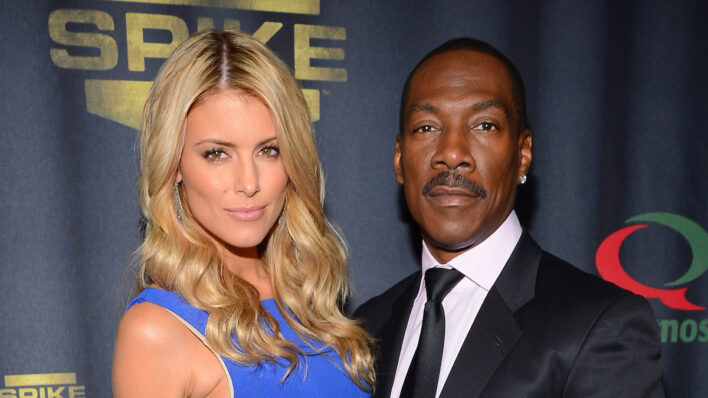 arrives at Spike TV's "Eddie Murphy: One Night Only" at the Saban Theatre on November 3, 2012 in Beverly Hills, California.

Despite past drama, Eddie Murphy didn’t close himself off to relationships and, at age 51, he found his match in Paige Butcher.
By Barbara Pavone    October 5, 2022

Despite past drama, Eddie Murphy didn’t close himself off to relationships and, at age 51, he found his match in Paige Butcher.

Eddie Murphy has had an incredible career, from Saturday Night Live to Beverly Hills Cop to Shrek. His Hollywood legacy is undeniable. However, the actor-comedian hasn’t been as lucky in love. Since welcoming his first child, son Eric Murphy, in 1989 with then-girlfriend Paulette McNeely, the Coming to America star has become a father of 10. He’s also had share of headline-making relationships. But then Paige Butcher entered Eddie Murphy’s life.

RELATED: What Eddie Murphy Has to Say About Fathering 10 Children With 5 Different Women

Despite the occasional drama, Murphy didn’t close himself off to relationships. At age 51, he found his match when he began dating Paige Butcher in 2012. And while they’ve enjoyed an extended engagement (Murphy popped the question in 2018), they’ve mastered the art of the blended family.

Who Is Paige Butcher?

Born in Perth, in Western Australia, Paige Butcher began modelling at a young age because, as she told Vanity Fair in 2013, it ran in her family. Her father, Robert Butcher, was a model, and her mother, a fashion designer. “So I was modelling for my mum’s stuff,” Butcher recalled, “and everybody said, ‘You should be a model’.”

First posing for shoots “when I was seven or eight,” Butcher “started really taking it more seriously” at 13. Her career eventually took off, landing numerous high-profile gigs, including the 2004 cover of Maxim’s Swimsuit Issue.

Butcher had her first movie cameo in 2003’s Something’s Gotta Give, followed by a minor role as Background Model #1 in 2006’s Big Momma’s House 2. While that marked the extent of Butcher’s acting career, it was on the set of the latter where she met Eddie Murphy. Although nothing happened initially, the encounter would forever change her future.

Following those two cameos, Paige Butcher ended her acting aspirations. As she told Vanity Fair, acting was “not really” something she cared to pursue seriously. “I moved to L.A. mainly for the lifestyle,” she explained. “Living in New York after 14 years, I’m such an outdoors kind of person.” In addition to embracing nature, she also focused on modelling and giving back to those in need (more on that later).

According to a source who spoke with Us Weekly, it was Murphy who “pursued her” in 2012 because he was not only attracted to her beauty, but to her down-to-earth personality. As the insider noted, the Australian native “loves sports, too, and likes to go to basketball games.”

As you say, people will use anything against you. The more you put out, the more you get back. I just wasn’t using it. And I was really boring. I would just post my volunteer work.

In 2013, Butcher proved just how disinterested she was in fame and the Hollywood lifestyle when she deleted her social media accounts. She pulled the plug on her online presence after becoming Eddie Murphy’s girlfriend in order to keep their lives private. “I’m in a relationship with a celebrity,” she told Vanity Fair, “so I felt like there’s already enough of me out there. I felt like I was giving out too much information. I was giving people too much access.”

Eddie Murphy and Paige Butcher Both Love Giving Back

Volunteer work is a major part of Paige Butcher’s life, and it’s something she has in common with her partner. Eddie Murphy has supported diverse charities and causes, from The HollyRod Foundation to the AIDS Healthcare Foundation. He even returned to stand-up comedy in 2020 to help raise money for Feeding America. However, Butcher is passionate about building homes with Habitat for Humanity and much, much more.

“Living in New York, I found New York Cares, so that connected me,” Butcher revealed, “and I originally would run sessions with KEEN, Kids Enjoy Exercise Now, for children with physical and mental disabilities — a sports program. I started with that and then nursing homes.”

Once she moved to Los Angeles, she didn’t stop. Rather, she found new initiatives she could support. “Here [in L.A.] I volunteer at homeless shelters,” she told the mag. “I look after the children while the parents go through counseling. The recent one I’m on every week is called Baby to Baby, which is a nonprofit for women that have children and are living below the poverty line, so the charity sends care packages with toys, things for the kids, diapers, strollers, and stuff. So I go there and help them out.”

I also refurbish wheelchairs, for Wheels for Humanity. They get donations of old wheelchairs that are broken, and we change the tires out, clean them, and put new seats in, and then they send them to third-world countries.

Despite Eddie Murphy’s imperfect relationship track record, he’s always placed his children first. As he told Entertainment Tonight in 2016, “The brightest part of my life is my kids […] My world revolves around them.” He shared a similar sentiment with HipHollywood, proclaiming, “I do love my family and kids and I love being around them. And I’m always there with them.”

When he and Paige Butcher became engaged in September 2018, Murphy was already a devoted dad of eight. However, the Australian model had no qualms about accepting his large family. And they accepted right back. “There is no people not getting along with each other, trippin’. There’s none of that,” Murphy told HipHollywood.

Case in point: In December 2016, daughter Bria Murphy shared a photo on her Instagram showing the blended “#MurphyFamily” celebrating Christmas together. The snap included most of her siblings, as well as Murphy and Butcher, who can be seen holding her first child with the actor, daughter Izzy Oona Murphy.

In August 2018, Murphy and Butcher took fans by surprise when the model showed off a baby bump and. Son Max Charles Murphy was born in December 2018. That same month, Bria shared another sweet Christmas snap on Instagram, this one showing Murphy with all 10 of his kids, posing alongside Butcher, her mom, and his mom, Lillian.

Murphy had son Eric with Paulette McNeely, son Miles and daughters Bria, Shayne, Zola and Bella with Nicole Mitchell Murphy, son Christian with Tamara Hood, and daughter Angel with Mel B. “I really got lucky with my kids,” Murphy told People in 2016.

And it’s not only his kids who get along with his fiancee. Murphy’s ex-wife, Nicole Mitchell (to whom he was married from 1993 to 2006), also has a good relationship with her. That was proved on the red carpet in December 2020, when all three came out to celebrate Bria’s film, Amateur Night, and happily posed for photos together.

Eddie Murphy’s personal life hasn’t been perfect, but the funnyman never gave up on the potential for love, even after his 13-year marriage to Nicole Mitchell ended. Murphy embraced the good that came out of his relationships — he’s called his kids the “brightest part” of his life, after all — and has been unapologetic in his devotion to his family.

When the right partner came along, she embraced that part of his life from the get-go, and although the Dolemite Is My Name star was 51 when he and Paige Butcher first started dating, it was undoubtedly worth the wait.