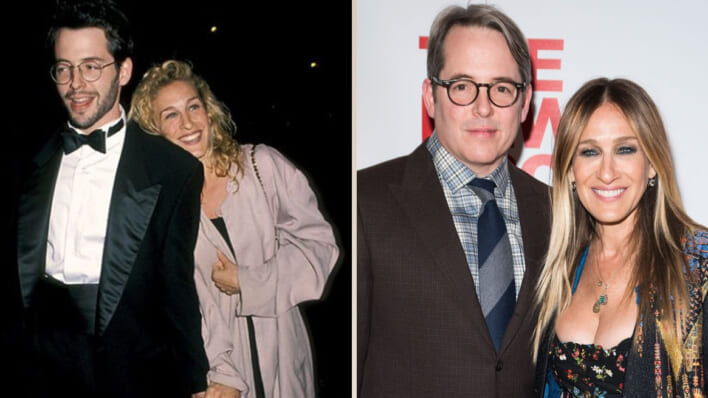 Together for 30 years, married for the past quarter of a century and parents of an adult son and two daughters, the couple is “in it for the long haul.”
By Laurence Lerman    October 12, 2022

Together for 30 years, married for the past quarter of a century and parents of an adult son and two daughters, the couple is “in it for the long haul.”

Sarah Jessica Parker and Matthew Broderick remain one of the most enduring couples in show business. And in this case, show business refers to film, theater and television, all arenas in which the two well-regarded actors have enjoyed much success: she with the movies L.A. Story and the Hocus Pocus franchise, the Broadway musicals Annie and Once Upon a Mattress, and TV’s Emmy Award-winning Sex and The City and Divorce; he in the films Ferris Bueller’s Day Off and Election, the Tony Award-winning productions Brighton Beach Memoirs and The Producers, and the TV shows The Connors and Daybreak.

Longtime New York City residents, Sarah Jessica Parker and Matthew Broderick have for years kept the ins and outs of what appears to be a very happy and successful marriage and family life on the down-low, prompting many questions about their relationship. Said questions usually surface when one or both of them are on the publicity trail to promote a project—including a Broadway shows that was forced to be postponed!

Parker and Broderick Have Been Together for 30 Years

Such was the case with the recent Broadway revival of Neil Simon’s 1968 marriage comedy Plaza Suite in which both Parker and Broderick starred. It marks the first time the two have performed together on the Broadway stage since the 1995 revival of the musical How to Succeed in Business Without Really Trying.

Originally slated to open in April, 2020 but delayed after the closure of Broadway theaters due to the Covid-19 pandemic, the curtain on Plaza Suite finally went up at Manhattan’s Hudson Theatre in the spring of 2022. Well-received by critics and audiences, the comedy concluded a successful four-month run on the Great White Way in July.

Turning back the clock to the spring of 2020, a couple of months into the pandemic, Broderick spoke about Plaza Suite and working alongside his wife on the SiriusXM show Quarantined with Bruce, at one point fielding a question about “the secret” to his long-lasting relationship with Parker.

“I keep reading ‘communication,’ and ‘she’s my best friend.’ Uh, any cliché you want?,” Broderick joked.

He continued with a more thought-out response that found him admitting he doesn’t have the answer.

Broderick’s comment actually says quite a lot—about the unqualifiable power of love, how it grows given the time and desire to make it work, and how longevity is always adding fresh dimensions to a marriage—along with children!—as the years pass by.

In the case of Parker and Broderick, the years date back to 1991, when they met through their mutual connection to New York City’s Naked Angels Theater Company, which was founded by Parker’s brothers and where Parker had directed a play. The two started dating not long after their initial meeting.

RELATED: Are You in Love? These 5 Proven Signs Will Help You Know for Sure

For her part, Parker can identify the time when she realized her future husband was “the one.” And though she can clearly remember their first kiss “outside an apartment building,” it was their second smooch that told her all she needed to know.

“I had a Ricola in my mouth. It was the dead of winter and I thought — well, it just seemed like a third party. So I spit it out into my gloved hand because I was getting on the subway … It was stuck on my glove,” she recalled.

The tousled-hair star noted that it was “a huge investment glove,” but said there was no going back at that point.

“It made a sort of mark forever,” she declared.

Parker and Broderick Fell for Each Other Quickly

Broderick seems to have arrived to his feelings about Parker even quicker:

While Broderick has stated that there is no “secret” to their relationship, or at least one that he can identify, Parker can more deftly apply a little love and logic to the question of how it all works.

“You have good days, you have decent days, and you have bad days. That’s a marriage. That’s a relationship. That’s a friendship, even — relationships outside the marriage run the same course,” Parker says.

Parker added, “If you’re in it for the long haul and you want meaningful relationships, you are going to go through lots of different periods.”

That’s it, isn’t it? Relationships aren’t designed to be easy and they all require work to succeed. Are there any true accomplishments in this world, personally or professionally, that don’t require some focus and work?

Parker and Broderick’s ‘Secret’ is No Secret At All!

Meanwhile, Parker and Broderick’s recently wrapped run in Plaza Suite was kicked off by the usual promotional blitz (similar to the one that accompanied the ill-fated 2020 production). And again, not surprisingly, the main thrust of the questions they fielded regarding the show, wherein they portray three different married couples, revolved around their marriage.

RELATED: Sigourney Weaver Found the Secret to Her Successful 37-Year Marriage in a Surprising Place

“That was a scary thing,” said a reflective Broderick on the flood of marital inquiries.

“It seems fair and right,” proposed Parker. “If I was a person interviewing us, and were doing a play about marriages and relationships, it would be awfully difficult to not ask where it overlaps with our lives.”

“I’ve always said one of the reasons we had success is because we don’t talk about our marriage,” she added.