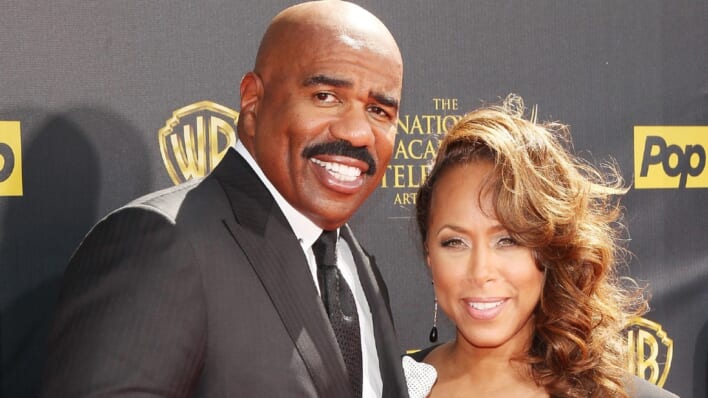 It took a long time for Steve Harvey, but he managed to have a marriage that is ideal to him, and yet, its existence is in itself a miracle.
By Jeff Liddell    October 11, 2022

It took a long time for Steve Harvey, but he managed to have a marriage that is ideal to him, and yet, its existence is in itself a miracle.

The expected celebrity lifestyle is not all fun and games, as the relationship troubles of several famous people, such as Steve Harvey, indicate. The pressure of fame, in addition to the accumulated wealth it usually carries, usually means successful people attract a lot of peers, both on a platonic and romantic level.

RELATED: Steve Harvey Was So Moved by an Unemployed Audience Member’s Struggle – So He Decides to Change His Life

As a result, it creates the infamous relationship problems found in Hollywood and other spheres of entertainment and celebrity culture. Even with the reputation they acquired overtime, plenty of celebrities to maintain a stable relationship even decades after getting married. Steve Harvey is one of those famed ‘exceptions’ regarding the reputation of the Hollywoodian dating scene.

Steve Harvey is known for many things. His claim to fame is his role as the host of the game show Family Feud and its spinoff Celebrity Family Feud. He also hosts his own radio show, The Steve Harvey Morning Show and the similarly named sitcom The Steve Harvey Show. He is the current host of the Miss Universe competition. Even with all of the aforementioned professional success, the part of Harvey’s life that he is most fond of is probably his miraculous marriage with Marjorie Bridges. The story of how they met and reunited decades later can be described as one of a kind.

Steve Harvey’s marriage to Marjorie Bridges is the longest marriage he has ever had, currently outpacing his first marriage by a couple of years. Indeed, Bridges is not Harvey’s first spouse. He has a lengthy marital history that began over four decades ago. In 1981, Harvey married Marcia Harvey, with whom he had three children. The oldest Harvey kids are twin sisters Brandi and Karli, as well as a son, Broderick Junior (“Broderick” is Steve Harvey’s actual given name, with “Steve” being short for his middle name, “Stephen”). The couple divorced in 1994, after thirteen years of marriage.

Two years after the end of his marriage with Marcia, Steve Harvey married Mary Shackelford. From this marriage, Harvey has another son named Wynton. In November 2005, after nearly a decade of marriage, Harvey and Shackelford divorced, albeit not without a few hassles along the way. Shackelford accused Harvey of leaving her homeless, but in 2011, her claims were dismissed. Judge Robert Day of Collin County, Texas, suggested that Shackelford was not materially destitute. He was also worried about false information about Harvey and Shackelford’s divorce that the latter was apparently spreading.

Less than two years later, Harvey would marry Marjorie after a surprise reunion with her. Compared to the apparently rough divorce that terminated his marriage with Shackelford, this seems to be had been a breath of fresh air for Harvey, indeed. He credits Bridges for changing his life, all for the better since he also claims she made him a “better man.” The couple do not have biological children together, but Steve adopted Marjorie’s own children from a previous marriage, Morgan, Jason, and Lori, after they were married. As of now, they also happen to have grandchildren.

The same year Steve Harvey and Mary Shackelford divorced, the famous game show host reunited with Marjorie Bridges by complete chance. The two reconnected through mutual friends, and after almost 20 years apart, they began dating soon after meeting each other again. The whole situation is poetic. According to his own account, Harvey even told her “I don’t know who you are, but I’m going to marry you one day.” It took over 15 years and he had to go through two more marriages before he could stay true to his words, but in the long run, Harvey proved himself right.

RELATED: Steve Harvey Protests Against Airing a Mystery Segment – What Happens Next Causes a Public Break Down

When they finally started dating and moved in together, Harvey and Marjorie brought all their kids with them. This decision led to their family becoming a blended one, much to the dismay of their offspring. Thankfully, with Marjorie’s ability to adapt to different scenarios and dedication to making everyone feel included, the blended family was a successful endeavor.

The bond between Harvey and Marjorie, in addition to their relationship with their children, only strengthened. It remained that way throughout their marriage, with the connection between the two spouses being strong enough that the Family Feud host wrote Marjorie a letter detailing his feelings for her and why she changed his life for the best.

What Steve and Marjorie’s Marriage Tells Us

In general, Steve Harvey’s romantic history shows that patience is key when it comes to relationships. He is at his third marriage right now, but it is without a doubt his most loving and successful one. Indeed, his letter claims that Marjorie “gave [him] peace” and that “receiving this gift freed [him] up to think and really do this job.” From his comments about her predicting his career to him saying that she taught him “how to keep moving”, it is clear that Harvey has been at his happiest for the past 15 years.

RELATED: How Kelly Ripa and Mark Consuelos Prove Working Together Can Make a Successful Marriage – Even After 26-Years

No one knows the details of Steve Harvey’s past relationships like he does for obvious reasons. However, it is easy to see that his past marriages came to an end due to personal failings on both his and his ex-wives’ parts. It is possible that he was simply unprepared for such a commitment, or that his personality was incompatible with his former spouses’ character in the long run. Regardless of what the reason was, Harvey married at a time that was expected for someone his age, but still had to grow before settling for one final time.

Sometimes, what someone needs to make a family life work is not necessarily a “perfect” partner, although that helps in more ways than one. What they need is to learn what they want and how they could achieve said desires in a way that is compatible with their personality. Between his first meeting with Marjorie and the big day that had them tie the knots, Steve Harvey had a lot of time to grow, develop his career, mature, and learn more about himself. By the time he married for the third time, he was more attentive, confident, and optimistic than ever before.