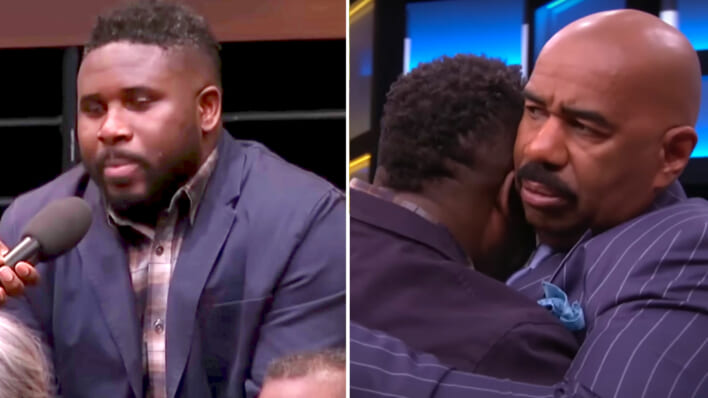 Back in 2019, things weren’t exactly going swell for Steve Harvey. His daytime talk show had just been canceled, and a couple of days later, NBC replaced him as the host of the primetime series Little Big Shots, with Melissa McCarthy.

Through it all, Harvey remained a beacon of positivity and optimism — especially for the final few guests he hosted in the audience of Steve.

During a commercial break, Harvey had a heart-to-heart with Everton Tulloch, one of the audience members. Tulloch was feeling de-motivated after being laid off from his job. He had been there for 15 years, but the company restructured, leaving the then-40-year-old unemployed and lost.

He asked Harvey how he stayed motivated. He explained people kept telling him he was overqualified for half the jobs he pursued but underqualified for the rest. That’s when the host stepped in with some game-changing advice.

RELATED: Steve Harvey Protests Against Airing a Mystery Segment – What Happens Next Causes a Public Break Down

“Let’s look at the layoff for what it was. It was time to go for you. Sometimes, man, we don’t jump. Sometimes we get pushed,” he said.

Everton Tulloch Proves Finding Your Passion Comes From Within

“You see, God is really fair, and when he wants you to do something else, and you won’t do it, he’ll bring about a set of circumstances that will cause you,” Harvey continued. “So now, there’s obviously something that you should be doing instead of what you was doing.”

As Tulloch nodded along, Harvey asked him what his real gift was. “Cooking,” Tulloch said. He explained that even as a little boy when all the other kids were out playing, he was inside learning to whip up Jamaican food with his grandmother.

RELATED: Beyoncé and Steven Spielberg Are ‘Failures’ – And That’s Good News for You

Tulloch revealed his absolute dream has always been to open up a Jamaican food truck. When Harvey asked him why he kept trying to find another job at the computer store or selling beverages for a company rather than pursuing what he was meant to do, Tulloch admitted he was afraid.

“Fear is the number one cause of failure in this country,” Harvey responded. “The fear of not succeeding.” He then pointed out how Tulloch had already been laid off, so what was the worst that could happen?

A Touching Surprise From Steve Harvey

Tulloch and his story touched Harvey. So during the next commercial break, he whipped out his phone and called the director of the foundation he has with his wife, Marjorie Harvey.

Tulloch could hardly believe it and rose to his feet, clapping. Then, with the help of an usher, he came to the stage, shook Harvey’s hand, and hugged him hard, fighting back tears.

“I appreciate it,” he said, over and over again.

In an update before Steve went off the air, Harvey shared a clip of Tulloch at the Institute of Culinary Education (ICE), making those dreams come true.

Fast forward to today, and Tulloch is still in the kitchen. Upon graduation from ICE, he did an externship at Hollywood’s Beauty & Essex, where he’s now the trainer for all new hires. According to ICE, Tulloch has worked on every station in the kitchen, eager to prove himself and learn everything he can.

RELATED: Steve Jobs’ Daughter Is Nothing Like Him – And He’d Be So Proud Of Her

“I’m not scared of anything in the kitchen,” he said. “Before, I would shy away or try to avoid doing things. ICE is so extensive — from learning how to correctly hold a knife to all the cuisines. The program hits on so many different angles and scenarios. When you leave, you will be well-rounded because you have knowledge of everything food-related, period.”

Tulloch will forever be grateful to Harvey and the foundation, not just for providing him with the funding to pursue his dream but for giving him the motivation and showing him a clear path.

“Without passion, sometimes you feel like you have no purpose,” he added. “[By] following your passion, your life will have purpose, and you will do exactly what you have been called to do.”

It’s Never Too Late to Take Control of Your Life

Harvey’s words are ones to live by. Life can knock you down, but by examining setbacks and looking at them for what they are — opportunities for change — great things can happen. Sure, Tulloch was fortunate that Harvey wanted to help him with his tuition and gave him the leg up he needed. But the point is that it’s never too late to start over and follow what you believe you were put on this earth to do.

Whether you go back to school, take evening or weekend courses on the side, or pursue an internship or entry-level job, there are steps you can take to help make your dreams come true. Or, if you’re already working your dream job and pursuing your passions, take a page from Harvey and help give others a leg up too.

If you can set up a scholarship or charity, great. Otherwise, donating your time, becoming a mentor, hiring interns, or speaking at events to students are great ways to help and motivate others. If Harvey — a guy who had two shows fall through on him in two days — can do it, anyone can.