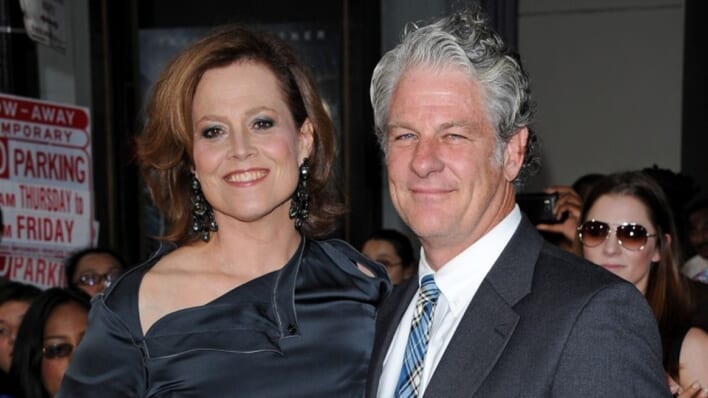 The Alien actor shows us why giving up on a relationship should never be your first go-to.
By Barbara Pavone    September 5, 2022

The Alien actor shows us why giving up on a relationship should never be your first go-to.

Sigourney Weaver and husband Jim Simpson are nearly coming on four decades of marriage. In a world where less and less couples are tying the knot — unmarried folks will soon be the majority of U.S. adults, per The New York Times — committing to a single partner can feel daunting. The fact that dating is increasingly being derailed by terrible trends, like roaching, doesn’t help. Not to mention that long-lasting, healthy relationships require work. Lots of work.

Indeed, meeting a couple who has been together for a decade (let alone three!) is increasingly rare, especially in Hollywood. However, if you look hard enough you’ll find a handful of inspirational pairs, including Tom Hanks and Rita Wilson, Jamie Lee Curtis and Christopher Guest, and Sigourney Weaver and Jim Simpson. What do they all have in common? They refuse to give up on each other.

Three-time Oscar nominee Sigourney Weaver has been married to stage director Jim Simpson since 1984 and the couple is the definition of relationship goals. Not only have they been happily married for nearly 40 years, but their meet cute could be the basis of a rom-com.

Weaver shared the story of their first encounter with Interview magazine in 2015 and recalled meeting her future hubby during the Williamstown Theatre Festival in Williamstown, Massachusetts in 1983. She was there as an actor while he was busy working as a director and part-time bartender. In fact, it was the bar — not the stage — where he made quite the impression on Weaver with an unassuming gesture.

“I remember going there with Christopher Walken — we were not dating — and I took my shoes off to dance on the dirt floor, and it was so dark,” Weaver told the mag. “This man who’s my husband now rescued my shoes and put them up on a pipe somewhere, so that I had to go to him and say, ‘Please, sir, where are my shoes?’”

It was love at first sight for Weaver, but their first date didn’t happen right away. “He was so cute,” she recalled. “I remember thinking, ‘Well, he’s going to be a bachelor for many years. I can see that.’ So I didn’t really think about him. And I had a boyfriend at the time.”

However, just a few months later, she invited him to a party and again, he impressed her with a small gesture. “He stayed late to help me put away the decorations, and then I asked him out to dinner,” she shared. After that, it took no time at all for her and Simpson to realize they were meant to be. “Three months later, we decided to get married,” she said.

Sigourney Weaver and Jim Simpson tied the knot on October 1, 1984 and had daughter Charlotte Simpson in April 1990. They’ve been happily married since and, as she told InStyle in 2021, they have a few simple principles to thank for their successful union.

For one, she and Simpson are similar but different. While they both work in entertainment, their jobs don’t often overlap and they’ve made it a point not to work together. In fact, the only time they collaborated was on 2002’s “The Guys,” which he co-wrote and directed and she starred in. It was a success, but they both agreed that it was a good thing the shoot only lasted 10 days.

As Simpson told IndieWire, “We don’t usually work together, so we can take turns with our daughter.” What’s more, “we also like to complain about whom we’re working with when we get home, and you can’t do that when you’re working together because you’re looking at ’em.”

Another major key to marital bliss has been that they support one another and they never compete. As Weaver told Express, her husband deserves plenty of credit for making their marriage work because “he is a strong man to be married to someone famous.” She explained, “He handles the fuss with grace. I get far more attention than him, but it’s clear for both of us that his work is as important as mine.”

That unwavering support proved crucial when the pair was trying to start a family. Daughter Charlotte was conceived by IVF and, as Weaver told InStyle, it wasn’t easy. “It takes a toll on your body and on the marriage too, because you start looking at clocks and all that stuff,” she confessed, but added, “I’m so glad we persevered.”

However, of all of the advice Weaver has for couples, her top tip is the simplest but also the hardest. “I’ve always believed what they say in the psychology magazines — that whatever is wrong with your current relationship, you’ll re-experience it in the next one,” she mused. “So why not stick with this great guy who you found and work things out with him?”

Giving Up Is Easy — Don’t Do It

In an age when most folks want maximum reward for minimum effort, Sigourney Weaver’s advice for marital bliss may seem unconventional, but it works. In fact, she’s not the only one who believes that giving up on a relationship is the easy way out and should only be your very last resort.

Indeed, Jamie Lee Curtis (who married Christopher Guest in 1984 just four months after first seeing him) has the same sage advice. As she told Good Housekeeping in 2018, the secret to a decades-long marriage is simple. So simple, in fact, it’s just two words: “Don’t leave.”

As the actor explained, “There’s a recovery phrase that says, ‘Stay on the bus, the scenery will change.’ You think you’re having a bad week, but stay on the bus, because one of these days you’ll look out the window and it’ll be beautiful.” She added, “I’m not a wild romantic. I’m a realist. I respect him. And I just don’t leave.”

As these two leading ladies show us, all relationships will have their rough patches and, like in life, there will be difficult moments, however, throwing in the towel when times get tough should not be your go-to. Why? Because there’s no guarantee you’ll ever find another bond as strong as the one you let go of. On the other hand, if you nurture what you already have, you’ll likely find that hard work, perseverance, and communication take your beautiful union and make it even stronger.

How Andy Samberg and His Wife, Joanna Newsom, Went From Fans To Lovers