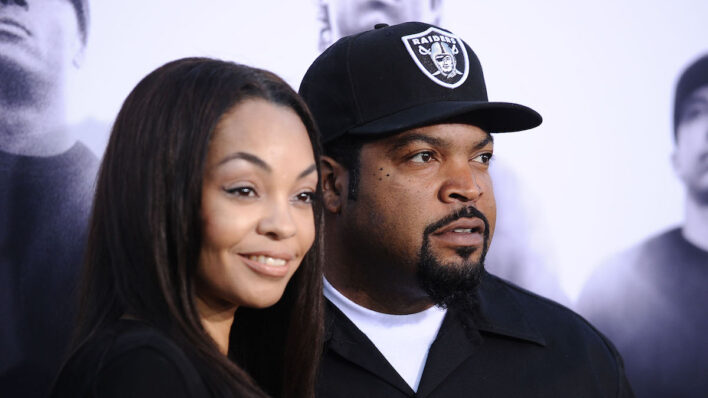 attends the premiere of "Straight Outta Compton" at Microsoft Theater on August 10, 2015 in Los Angeles, California.

Ice Cube shares the secret to his thirty-year marriage with his wife Kimberly and what they do to keep the love going.
By Shaoni Das    December 21, 2021

Ice Cube shares the secret to his thirty-year marriage with his wife Kimberly and what they do to keep the love going.

Ice Cube may be known as one of the hardest men in the business, but once you begin peeling through the layers, he’s a softie at heart.

A self-proclaimed gangster, he’s built his reputation as the type of person who fears nothing and no one, someone who is willing to court danger and jeopardize his livelihood in the name of standing up for himself. His public persona, as such, exudes ruthlessness and a tough-as-nails resolve, which does tend to drive people away. If everyone is terrified of you, how will you ever find love?

At the same time, his unyielding personality does allow him to get through most of life’s biggest hurdles with ease and determination. Take, for example, his thirty-year marriage with Kimberly Woodruff. They weren’t meant to get together, but Ice Cube waited patiently and respectfully till his turn came. Once it did, he seized the opportunity by its horns and ensured he would never let his lady go. Their story exemplifies what it means to share a long-term commitment, a commitment that tests you to the limit every day but also inspires you to be your best self.

Let’s chronicle Ice Cube’s relationship with Kimberly and how they’ve been subverting expectations for thirty years and counting.

It wasn’t a straightforward beginning for Ice Cube and Kimberly. Like any other couple, they had to go through their share of ups and downs, but unlike most couples, they managed to overcome those obstacles with aplomb.

The rapper, born O’Shea Jackson, met Kimberly when she was in college. At first, it was a one-sided attraction. “The first time we met, she wasn’t feeling me, she was NOT having it,” he shared. She’d also been in a relationship at the time, so the prospect of dumping her boyfriend for an up-and-coming rapper didn’t seem appealing at all, to say the least. It wasn’t until six months later that Ice Cube was able to reconnect with her and take another stab at pursuing a romance. This time around, he was successful, and Kimberly accepted his advances, opening herself to him bit by bit. “She could feel my vibe and fell in love with your boy,” the former N.W.A member said.

The two started dating shortly and became engaged three years later. Their first son, O’Shea Jackson, was born on February 24, 1991. They married a year later, on April 26, 1992, and went on to have three more children over the next four years. Speaking about the secret to their long-lasting marriage, Ice Cube said it’s nothing but a genuine “partnership” among the two and that he still gets “butterflies” when he sees her. You’d think a couple in their fifties would have difficulties keeping the spark alive, but as per Ice Cube, nothing has changed at all. The passion is still intact, the infatuation is as boundless as ever, and the connection they feel toward each other is becoming more and more potent with time.

Romance and sex doesn’t have to fade. I still want her to look at me and say ‘this is the man I still want to be with.’ So have to keep yourself up, your P’s and Q’s and go for what you know.

It’s as though they’re a pair of lovebirds laying their eyes on each other for the first time, brimming with endless affection and emotion. It’s a beautiful thing to be able to view your partner with the same rose-colored glasses as when you first met them — to keep this going for three years running is nothing short of extraordinary. Best of all, they’re able to take the wisdom gathered over the last thirty years and actually apply it to their marriage. “I respect my wife and she respects me,” stated Ice Cube, indicating the extent to which he and his wife understand each other.

What’s sweet is how Ice Cube actively endeavors to preserve the excitement. He could easily rest on his laurels, and their rapport would still survive. But that’s not enough: he aspires to sustain the attraction for as long as possible. That means “keeping yourself up” and rising to the occasion whenever necessary. “I still want her to look at me and say, ‘this is the man I still want to be with,’” the Ride Along actor revealed. If she stops desiring him at any point, something went awry, and he will undoubtedly take it personally. That’s why he celebrated their 25th wedding anniversary with a “re-proposal” of sorts. “I don’t know if it was considered romantic. I had bought her a new car, a BMW 5-series, and when she went to sit in the car, there was a ring sitting on the seat,” he stated.

Ice Cube will be the first to tell you that it’s not mandatory to surprise your partner with a 24-carat gold ring or a BMW car. The gesture could be as small as you’d like, but as long as you’re making an effort and showing up, you’re doing something right. For example, he stresses the importance of simply “hanging out” with his wife. “I like to hang out with my wife, talk about things, get some coffee, you know,” said the 52-year-old. In his view, you don’t have to move heaven and earth to make a statement. “Sometimes just understanding where the other person is coming from is helpful to getting along and being happy,” he said, emphasizing how communicating is key to their relationship.

Sometimes just understanding where the other person is coming from is helpful to getting along and being happy.

Ice Cube’s gentle side might be a surprise to many, but it proves once again how nobody is two-dimensional. You could present yourself as the most rugged, bullheaded man in the world, but you still need to turn on the charm periodically: it’s the least anyone can do to strengthen their marriage.

Always go the extra mile when it comes to love

Effort is everything. Love doesn’t last on its own; the people involved in the relationship have to go the extra mile to keep the connection powerful. Ice Cube understands the value of a partner by your side in sickness and in health: that’s why he always makes sure to impress his wife, see where she is coming from, and show her a good time. Age doesn’t have to be a barrier in what you can do to convey your admiration, respect, or lust for someone. Different couples have different traditions and preferences, so take the time to know your partner and get familiar with their needs. The relationship matures, so must your way of expressing love.