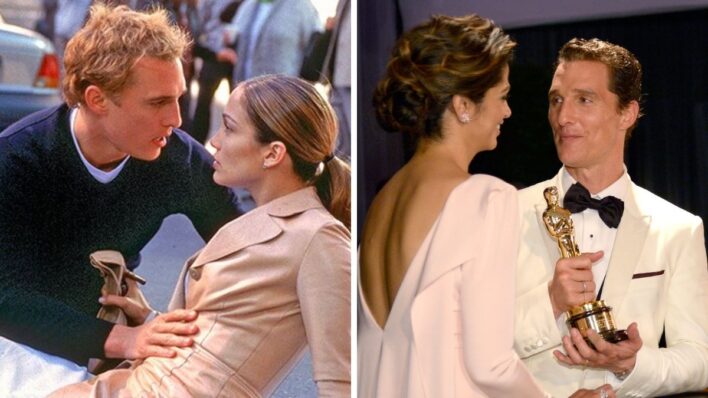 Matthew McConaughey found the “love of his life” in Camila Alves but it did not come without major sacrifices.
By Shaoni Das    June 29, 2021

Matthew McConaughey found the “love of his life” in Camila Alves but it did not come without major sacrifices.

How did Matthew McConaughey make the transition from rom-com heartthrob to leading dramatic actor?

It’s a question that has stumped, and surprised, many cinephiles across the country. Unfortunately, there is a tendency to enclose celebrities into specific, pre-ordained boxes, so when someone dares to break loose, the press usually constructs false narratives about the performer’s choices and sometimes actively roots for their failure.

In the late aughts, Matthew, who principally built his entire career off of bright, crowd-pleasing romantic comedies, decided to cut loose from his sweetheart persona, and establish a substantial career in drama. He’s definitely not the first to make the jump, but the intensity and earnestness with which he embraced his newfound ‘gravitas’ astonished everyone across the board. In fact, his evolution had been so prompt and drastic that it spawned the term ‘McConaissance.’

While Matthew McConaughey does deserve kudos for his jaw-dropping transformation, he wouldn’t have been able to make the call without his wife’s insistence.

Matthew found the “love of his life” in Camila, and wanted a new challenge

It’s never easy to see your partner as an object of desire for anyone but yourself; it’s even more excruciating to have a slew of women across the world dying to kiss and make love to him. Yet Camila Alves, Matthew’s wife, never conceded to the jealousy. She never faltered in her encouragement of his craft, whether it’s in comedy or drama. Instead, she has and continues to celebrate his body of work with pride and dignity.

It’s only the vicious press that insinuated that her supposed jealousy might have played a part in forcing Matthew out of the rom-com arena. In reality, they don’t realize that Camila herself is an internationally acclaimed model, who likely has to endure her own share of unsolicited passes. It would only be hypocritical for someone of her position to let the envy get the better of her.

Matthew recently revealed in an interview that while Camila supported him through the change, it had been his initiative from day one. In early 2008, while awaiting the birth of his first child, the Texan actor essentially went through a profound epiphany about his career trajectory, particularly in the context of his personal ups and downs.

He’d found the ‘love of [my] life’ and was slowly discovering the full extent of the unfettered passions, sensations, and thrills life had to offer. He didn’t think the romantic comedies he had spent the majority of his career staring in reflected his psychological and spiritual development. He’d started becoming more cognizant of his most acute emotions, had “things to get angry about, laugh about, have more joy about, and be sad about.” When you’re going through such a pivotal metamorphosis off-screen, it’s only fitting that you’re allowed to undertake such a change on-screen.

I found the love of my life in Camila [Alves]. We had a newborn coming. I had more things to get angry about, laugh about, have more joy about, and be sad about. The ceilings and basements had more depth and height to them, and I wanted to do work that reflected my personal vitality.

Romantic comedies are “thin, by design,” he assessed, whereas dramatic cinema was more about portraying the unflinching truth about humanity. “You’re looking for reality all the time. You don’t go pining for reality in a romcom,” he told The Guardian.

Playing the sophisticated, charming leading man on romantic comedies had been Matthew’s claim to fame. It’s what audiences had come to expect from him; it’s what catapulted him to the height of Tinsel Town fame and popularity. He excelled in embodying these affable characters and would have had no problem carrying this routine through the rest of his career.

Yet, he knew in his heart that a shift was imminent. There was a limit to how much Matthew was willing to put up with the same-old romantic hero act. With the arrival of his baby boy Levi, Matthew decided to put his foot down for once and for all, determined to venture into unfamiliar territory.

He sought advice from his wife Camila, who not only backed him wholeheartedly but instructed him not to “half-ass it.” And so, the Dallas Buyers’ Club actor convened a meeting with his manager, agent, and team and drew up a strategy for pursuing this new category of cinema.

As it turns out, it had been a seismic risk on his part and required immense conviction and patience. Rom-coms had been his bread and butter for the better part of his career, so naturally, he wasn’t receiving proposals for dramatic roles quite immediately. “I said no to every rom-com script that came my way. I turned down one for $14.5 million,” he stated.

Matthew had practically taken a sabbatical from the entertainment industry. When not a single dramatic proposition came through his mailbox the whole year, he had to reckon with the possibility that he may never have a career in Hollywood again. Yet, thanks to Camila’s undying love and invigoration, he decided to stick to his guns and see through his call.

It was scary. But Camila said, “If we’re going to do this, we’re not going to half-ass it […] I was now shaking hands with the fact that I may never work in Hollywood again. It pinched me a little, but I was OK with it. It was time for a new chapter in my life.

Of course, it paid off. Matthew McConaughey was able to rebuild his entire career as a thoughtful, dramatic performer, someone with credible acting chops and boundless gravitas to boot. His adroitness at dramatic performances managed to surprise many skeptics across the industry, and it just goes to show that you can’t constrain anyone in a box. Everyone has the right and capacity to change, evolve, and unearth different qualities about themselves.

As they say, change is the only constant in life. Yet, instead of fighting and repressing as if it’s some sin you’re committing, it’s best to approach these changes with a fresh perspective and a willingness to make the most of it. Matthew McConaughey realized that the vital developments in his personal life were starting to impact his professional journey and that he needed to challenge himself in a different area. While most of us don’t have to contemplate the transition from ‘romantic comedy’ to ‘drama,’ we can relate to the phenomenon of desperately seeking change in our lives.

Perhaps there will be a tendency to resist this change, and you might ask yourself whether your loved ones will support it. Well, if they genuinely love you and prioritize your wellbeing, they’ll be accepting of it as long as it makes you happy. So if you ever start feeling like you could use a dramatic change in your professional or personal life, understand that you’re not the only one, and that it is an essential element to being human.