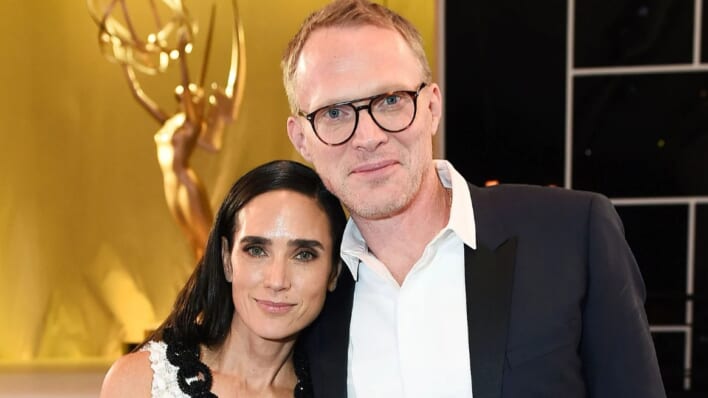 With a single post on his Instagram page, Paul Bettany reminds us how he and his wife Jennifer Connelly remain one of Hollywood’s most enduring couples.
By Laurence Lerman    August 26, 2022

With a single post on his Instagram page, Paul Bettany reminds us how he and his wife Jennifer Connelly remain one of Hollywood’s most enduring couples.

Paul Bettany and Jennifer Connelly have been together for more than 20 years. They’ve been married for nearly that long, and they share two children together. A post that Bettany made on his Instagram page is a perfect example for why their relationship is working so well for them.

RELATED:  Who Is Salma Hayek’s Husband? A Look Into Their Secretive Marriage

Bettany shared a shot of a Variety article from August 20 on Instagram that was topped with the headline “’Top Gun: Maverick’ Takes Down ‘Avengers: Infinity War’ as Sixth-Highest Grossing Movie in Domestic Box Office History.”

In the caption beneath the shot, Bettany jokingly wrote, “I’m just never gonna live this down in my house.”

Connelly & Bettany Have Both Appeared in Recent Blockbusters

The London-born Bettany, of course, co-stars as the android “Vision” in both the blockbuster Avengers movie series and the hit Disney+ spinoff series WandaVision, the former being a staple in the Marvel Cinematic Universe (MCU). Connelly is featured as superstar Tom Cruise’s love interest in Top Gun: Maverick, the high-flying sequel to 1986’s Top Gun that continues to make noise at the box office as it enters its fourth month in the theaters.

For those keeping track, after 13 weeks, Top Gun: Maverick has rung up $683 million at the North American box office, overtaking Avengers: Infinity War, which had a final domestic gross of $678 million.

Equal parts adorable, self-effacing and loving, Bettany’s post and comment underline the respect, pride, strength, humor, and love that is at the heart of his and Connelly’s marriage.

Paul Bettany and Jennifer Connelly met while filming the 2001 drama A Beautiful Mind, which went on to win the Academy Award for Best Picture and Connelly the Oscar for Best Supporting Actress. From one of the very first table reads at the outset of production, the two were intrigued with each other.

“I’ve never been this close to someone that beautiful before,” Bettany recalled. “I remember thinking, ‘I bet every man you ever met has tried to flirt with you.'”

For her part, upon meeting Bettany at the read-through, Connelly remembers thinking, “Hmm, he’s really good, that guy.”

Both actors were in other relationships when they met, but their friendly on-set relationship became a romantic one following the shoot and shortly after the terrorist attacks on New York City on September 11, 2001. Bettany has said that he worried so much about Connelly, who lived in downtown Manhattan at the time, that he realized he was truly in love with her.

He also claimed that he proposed to his future wife before they even dated and that he moved in with her in New York City, while Connelly has admitted that it was Bettany’s musical talent that won over her heart.

“He started playing guitar and it was all over,” she said.

The couple quietly wed in during the 2002 holiday season and together raised Kai, Connelly’s son from a previous marriage. They later welcomed two more children to their family: a son, Stellan, in 2003, and daughter Agnes in 2011.

RELATED: The ‘Only Reason’ Pink and Husband Carey Hart Are Still Together After 15 Years of Marriage

In the decades since the two got together, both have steadily continued their careers as A-list actors in a number of successful projects —she in The House of Sand and Fog, Hulk, Little Children, Dark Water and Noah; he in The Da Vinci Code, Master and Commander: The Far Side of the World, The Tourist, Solo: A Star Wars Story and a handful of other MCU projects.

But it doesn’t appear that Bettany and Connelly’s careers have ever gotten in the way of their personal commitment, of their love and respect for each other. Perhaps the fact that they don’t live in Los Angeles plays a role—they’ve lived in both downtown Manhattan and currently in the very posh and scenic Brooklyn Heights for nearly two decades, far from the roar of the Hollywood scene (not to mention that of the freeways and accompanying smog).

But even as their professional lives run parallel to their personal ones, Connelly and Bettany have also intersected the two via their collaborations on a handful of films that are notably smaller and more particular than the Hollywood fare with which they’re most associated.

The Couple Has Collaborated on Smaller, More Personal Films

In 2009, they costarred in the British production Creation, an historical drama-romance about English naturalist Charles Darwin’s struggles to complete his landmark treatise On the Origin of Species while trying to maintain his strained marital relationship. Bettany and Connelly’s portrayal of Mr. and Mrs. Darwin seemed to come naturally to the pair and was lauded by the press.

They worked together again five years later when Bettany cast his wife in 2014’s Shelter, his feature film directorial debut (which he wrote, as well). A small, emotional drama starring Connelly and Anthony Mackie as a troubled pair of city dwellers, Shelter is loosely based on a couple that lived nearby Connelly and Bettany’s home in Brooklyn. An independent film that didn’t make much noise at the box office — clearly, it wasn’t box office bait—Shelter did receive a lot of critical love.

RELATED: 30 Marriage Quotes to Celebrate the Power of Your Bond

Again, a smaller film by a pair of professionals in love who clearly choose to collaborate on projects that resonate with them on a personal level. It appears they  would rather leave the big stuff to Hollywood when it comes to crossing paths professionally. Perhaps that’s what leaves room for them to smile at each other’s successes, support each other when their movies don’t click, and make jokes on Instagram for everyone to see and enjoy.

Incidentally, Bettany’s Instagram post garnered 172K likes and more than 1,000 comments in only a few days, which is many times more than his posts have generally received over the years. Clearly, the public liked what the post revealed about the dynamic between the actor-spouses.

Connelly, who made her @jennifer.connelly Instagram debut just this past April (Bettany has been on board since 2014), has largely avoided pictures of her family, as has Bettany — presumably to keep their family life private — in favor of fashion-flavored posts and others promoting Top Gun: Maverick. One notable exception is a snapshot of Jen and her husband exchanging a loving kiss that she posted to acknowledge Bettany’s 51st birthday.

Upon Connelly’s signing up for Instagram, Bettany put up a screenshot of his wife’s first post on his account, writing “Soooooo my Mrs @jennifer.connelly has finally joined Instagram. Follow her at your peril and believe only half the things she says about me.”

You know Bettany was smiling when he wrote that, and Connelly when she read it.