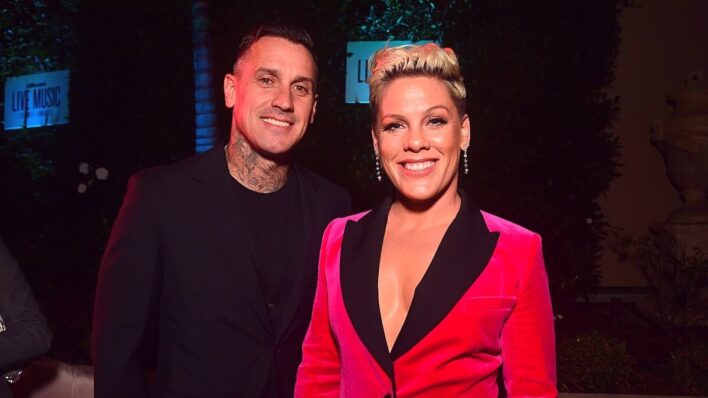 What happens when the most unconventional couple in Hollywood runs into a typical marital problem they can’t resolve?
By Shaoni Das    October 27, 2021

What happens when the most unconventional couple in Hollywood runs into a typical marital problem they can’t resolve?

How far would you go to save your marriage?

Anyone who’s married can attest to the challenges of the institution and how it can transform someone from the inside out – in ways both good and bad. When we agree to tie the knot with the love of our life, we’re also “tying” ourselves down to a life of stability, consistency, and long-term commitment. If you’re the kind of person who values these ideas, marriage is always going to seem like a dream come true; however, if you’re the kind of person who’s always gone against the grain and doesn’t prefer the conventional life, marriage is going to seem like an uphill battle.

Pink and her husband, Carey Hart, have always been on the latter team. The two have built a reputation as one of the boldest, edgiest, and nonchalant couples in the industry. They’re not concerned with following the rules, they couldn’t care less about keeping up appearances, and they will never bend to the social convention for the sake of conforming.

Yet, despite their devil-may-care attitude, they had to succumb and address the gaping adversities in their partnership. Here’s how they saved their marriage at the eleventh hour:

Pink and Carey Hart have never been afraid of breaking boundaries as far as couples in entertainment, which already skews unconventional in the first place. She was the one who publicly proposed to him during one of his motocross races, which he ecstatically accepted. Later, when they separated in 2008, and she released her breakup track, ‘So What,’ Carey opted to appear in the music video, even though the song vilified him and harked back to his problematic behavior. They’ve broken up and reconciled twice in the past twenty years, so they’re clearly not the type to stay in a broken relationship in the hopes it would magically improve one day.

However, their odd choices are also underpinned by a desire to make their marriage work no matter what. In an Instagram Live session last year with her therapist Vanessa Lin, the 42-year-old revealed the real reason why she and her husband are still together: couples counseling. “It’s the only reason that we’re still together,” said the singer. She added that she received plenty of flak for disclosing she was in therapy with Carey, but at the end of the day, it was a necessary intervention to help them see each other and get on the same wavelength.

You need someone to hear both of you and then translate it for you, and without Vanessa translating for me for the last 18 years, I mean we would not be together.

If people can attend therapy for their individual mental health, why not seek the same treatment for your ailing marriage?  The mother-of-two said that this is a predicament that many couples can and will encounter, especially if they’ve been with each other for a long time. You’d think the time and the shared history bring them closer together, but it also makes them complacent and stagnant, so much so that they require a third party to help them speak the same language. “I can’t say it’s a man and woman thing,” said Pink, reasoning that it’s a general relationship phenomenon that can strike anyone. It’s all too commonplace to realize one day that you both “speak two different languages” and still don’t understand each other anymore.

She said relationships aren’t about “fixing” your partner; it’s about fixing yourself

The ‘Cover Me In The Sunshine’ singer also spoke out about how people are not really trained on personal relationship management; it’s a guessing game as far as anyone is concerned. You can learn from others’ mistakes, and you can model your decision-making on others, too, but none of their situations really apply to you in the grand scheme of things. So, yes, everyone is flying blind, and it’s not our fault. “We are not taught as kids how to have relationships, how to get along with people,” she said. In fact, this constitutes one of the root causes of political and cultural conflict in our country: the startling lack of communication and mutual understanding.

While we can’t subject an entire nation to group therapy, it is possible to get two people in a room and get them to unload their frustration in a healthy, productive way. If they’re fighting the same problem, the chances are that they’ll be more likely to work collaboratively to get to the bottom of their resentment. “We don’t know how to love each other, we don’t know how to get along, we don’t know how to communicate,” said Pink. Naturally, a therapist can come in and help the couple work through their issues systematically without worrying about the pain inflicted.

Pink also let the followers in on a particularly vulnerable moment during therapy, where she was yelling at her husband for not being present for her. She’d been fuming incessantly — about how “how he’s just not present, he’s not here, he doesn’t get it, he’s not hearing me emotionally” —without giving him any space to counter. That’s when Vanessa, their therapist, told them to “shut up, stand up, put [their] hands on each other’s hearts and just look into each other’s eyes.” When Carey did this, with his hand on his heart and his eyes peering into Pink’s soul, she realized she’d been colossally unfair on him, too. She’d been unleashing on him without any break, and that she needed to slow down to empower him to speak up as well. That’s a development that was only made possible through therapy – where you had a professional set the boundaries of what was acceptable and necessary, and a little direction goes a long way.

Therapy didn’t necessarily fix Pink and Carey’s marriage; it may have saved it, but it definitely did not wipe out all their obstacles overnight. “It takes work to redefine what’s important,” she told People earlier this year. Her main focus has been to keep the family together since she was raised in a broken family, and she doesn’t want the same predicament to befall her unit. So, instead of haranguing her husband over every single matter, she has learned to lower her expectations and let certain things go.

Long-term relationships are not easy […] It is much easier to stay in the solid days and jump from relationship to relationship, because then you don’t have to fix the problems that keep recurring. You have to end up fixing yourself; you can’t fix the other person.

Communication is an uphill battle but always worth your time

Therapy can’t be the magical solution to your life’s problems, but there must be something valuable from the exercise if so many lives have changed for the better as a result of therapy. At the very least, it provides a peaceful, moderated environment for you to voice your opinion, get to know your partner’s perspective, and learn how you can most effectively resolve the matter of contention. Sometimes, the best way to settle marital strife is to end the union, and sometimes, as in Pink and Carey’s case, it’s to rediscover your love for each other and give yourselves a second chance.

The fact of the matter is that trained communication can go a long way in empowering you to understand not just yourself but the world around you. Bridging this gap is the first step in building the future you want for yourself.